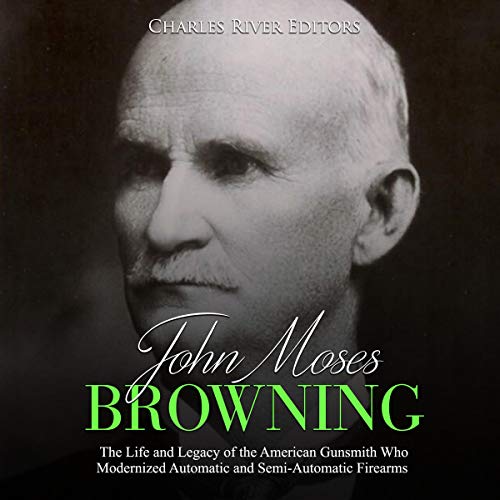 John Moses Browning: The Life and Legacy of the American Gunsmith Who Modernized Automatic and Semi-Automatic Firearms

The Industrial Revolution that unfolded in Western societies at the dawn of the 19th century altered daily life as a rapidly developing paradigm. One historian suggests that in Europe and America, the highest known form of technology was the pipe organ before the rise of factories, steam drive combustion, and railway and communication breakthroughs built upon the mastery of electricity and transformed the standard processes of society. Such a rapid alteration of the prevailing world seemingly took place in a historical instant that propelled technology all the way to the age of powered flight.

No less affected were the technological accomplishments that cast their influence over the wars so rampant in Europe through the past centuries. Military weapons benefited from various upgrades and innovations, even as the soldiers and generals remained confined within Napoleonic tactics while struggling to learn about the new principles of physics and engineering.

Technological advancement within the field of mechanical engineering experienced a golden age in the 19th century. Virtually every profession that worked in the traditional materials of wood and metal developed a capacity for precision and functionality hitherto unknown. In the arena of portable weaponry for both the military and civilian population, several new inventions with endless variations redefined American and international habits of sport and war, not to mention exploration and frontier survival. The traditional musket had changed little through the previous century, and the insatiable quest for a repeat-firing mechanism remained as the arms industry’s highest goal. The world knew that someone would find the solution and that future wars would occur, granting the nation to solve the riddle supremacy on the battlefield. The results of this pursuit were ushered in by several luminaries on the heels of an industrial revolution that had reshaped British industrial technology only a few decades prior.

By the late 19th century, the nature of war weaponry, new naval paradigms and the first imaginings of aviation as a primary component of battle required yet another leap in technology. One single artisan arose from among many talents to meet the new challenge at a high level, far from the prestigious pistol and rifle factories of Connecticut. John Moses Browning was raised in what was at the time the “Wild West” of the Utah Country. His educational upbringing was both sparse and basic, but through the impetus of his father’s gun-making business, he would become the greatest mind of the arms industry’s modern age. Where Colt labored over one solitary concept that eventually led him to the modern repeating revolver, Browning’s instinct proved able to visualize concepts far above his formal training and follow them through to a number of diverse and functional weapons. Although Winchester emerged into the greatest salesman of the modern repeating rifle and gathered early designers such as Benjamin Tyler Henry to his workshops, he was no inventor. Talents such as that of Browning were to be absorbed by the Winchester Repeating Arms Company in order to maintain an ongoing superiority in product lines and sales numbers.

The major weapons manufacturers soon realized that there was no talent equal to that of the Utah frontiersman, and in time he was employed by all the top gun-makers in the United States and Europe, including Fabrique Nationale in Belgium. There, he was granted well-deserved respect and the right to see his inventions find the light of day, sought after for so long. The breadth of Browning’s mechanical brilliance is evidenced by the reality that his designs from the pre-World War I era are still in production, and many are considered to be among the finest available models more than a century later.

Our best offer yet
Get 3 months free!
Limited time offer. Get started
Learn more about membership
List Price: $8.71
You Save: $1.09 (13%)
By completing your purchase, you agree to Audible's Conditions Of Use and Amazon's Privacy Notice. Tax where applicable.
Sold and delivered by Audible, an Amazon company
Share

4.1 out of 5 stars
4.1 out of 5
29 global ratings
How are ratings calculated?
To calculate the overall star rating and percentage breakdown by star, we don’t use a simple average. Instead, our system considers things like how recent a review is and if the reviewer bought the item on Amazon. It also analyzes reviews to verify trustworthiness.
Top reviews

Dave in Missouri
1.0 out of 5 stars Just plain bad
Reviewed in the United States on October 15, 2019
Verified Purchase
Usually the Charles River Editions are good, short takes on a subject.
Once in a while they get something wrong, but overall they're good reads.
This one is a total loss, not worth even the short read.

This short biography of John Moses Browning was obviously written by someone who knows little to nothing of firearms or firearms history.
There's just so much incorrect information that this one is a total waste of time.
John Moses Browning was a fascinating man and the greatest firearms inventor of all time, but this book is so filled with bad facts and information as to be worthless.
Read more
9 people found this helpful
Report abuse

Huckle Cat
2.0 out of 5 stars Good content / awful writing
Reviewed in the United States on October 30, 2020
Verified Purchase
The bones of a good short biography are here. But the writing, run-on sentences, clunky modifiers, and just awful text make me wonder if this was assembled by a bot. 8 hours with a seasoned professional editor would make this a great capsule biography.
Read more
3 people found this helpful
Report abuse

Bob Daves
5.0 out of 5 stars Wonderful History
Reviewed in the United States on June 16, 2022
Verified Purchase
Wonderful book on one of the best designers of firearms. He still has the 1911 which is still in use today.
Read more
Report abuse

DD Gott - Donadees Corner
5.0 out of 5 stars Quick and easy, History at it's finest.
Reviewed in the United States on November 6, 2019
Verified Purchase
I love history and Charles River Editors make it so easy to keep you informed! As I have aged I find that I have forgotten many things and this is a quick way to refresh my knowledge. Thank you, guys! Quick and easy, History at it's finest.
Read more
Report abuse
See all reviews