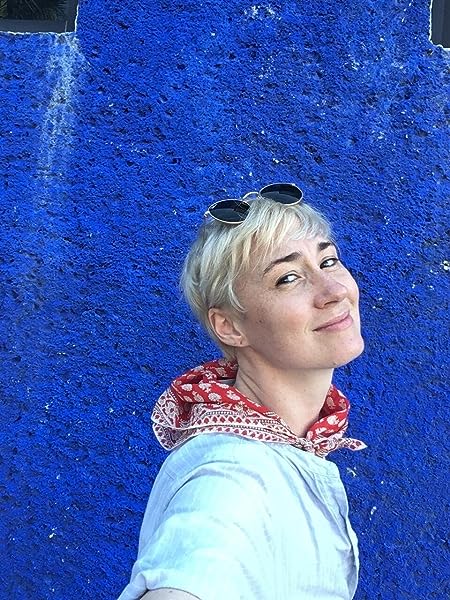 by LOVE JESSICA (Author)
4.8 out of 5 stars 4,030 ratings
See all formats and editions
Sorry, there was a problem loading this page. Try again.

Jessica Love is the author and illustrator of the critically acclaimed picture book, Julián is a Mermaid, published by Candlewick Press. Originally from Santa Barbara, California, Jessica studied printmaking and visual art at the University of California, Santa Cruz, and graduated with a degree in Visual Art.

She was then accepted to The Juilliard School to study acting, and graduated with a degree in Drama in 2009, and has been working as a stage actor ever since. She has appeared on and off-Broadway, as well as many theaters around the U.S.

Julián is a Mermaid is Jessica's first book, and she lives in the Hudson Valley, NY with her husband and child.

4.8 out of 5 stars
4.8 out of 5
4,030 global ratings
How are ratings calculated?
To calculate the overall star rating and percentage breakdown by star, we don’t use a simple average. Instead, our system considers things like how recent a review is and if the reviewer bought the item on Amazon. It also analyzes reviews to verify trustworthiness.

Aleesha
5.0 out of 5 stars Beautiful Story!
Reviewed in Canada 🇨🇦 on November 21, 2021
Verified Purchase
This is my daughters favourite book (and mine too)! I purchased the book when my daughter was 2.5yrs old. Perfect for young readers! I would definitely recommend this book for anyone.
Read more
One person found this helpful
Helpful
Report abuse

Rosier
5.0 out of 5 stars What's not to love!
Reviewed in Canada 🇨🇦 on August 7, 2019
Verified Purchase
This book warms my heart and brings a tear to my eye. I love the calm colour palette that is still somehow so vibrant. I love that the minimal text per page encourages young readers to look to the illustrations to gain deeper meaning. I love how Julian's abuela doesn't just accept his interest in mermaids but actively engages in it with him. And I love Love LOVE the inclusion of a variety of body shapes!!
Looking forward to reading it to my kindergarten class!
Read more
2 people found this helpful
Helpful
Report abuse

Daddywarbuck
5.0 out of 5 stars Boys can be mermaids too
Reviewed in Canada 🇨🇦 on May 15, 2021
Verified Purchase
Beautiful story and illustrations. I had a boy in my class that wanted to be a mermaid so this was perfect!
Read more
One person found this helpful
Helpful
Report abuse

Levi Labelle
5.0 out of 5 stars Can I be a mermaid too?
Reviewed in Canada 🇨🇦 on February 24, 2020
Verified Purchase
What a joy this book is. The art is delicate and wonderful. The story is inclusive and filled with love. I’m filled with both joy and love now. So grateful for Juliàn.
Read more
One person found this helpful
Helpful
Report abuse

C Moss
5.0 out of 5 stars Unconditional love between a child and grandparent
Reviewed in Canada 🇨🇦 on February 23, 2020
Verified Purchase
A beautifully Illustrated story of how simple it is to love someone for who they are. There are mermaids among us and we are blessed to have them.
Read more
One person found this helpful
Helpful
Report abuse

ana
5.0 out of 5 stars Amazing
Reviewed in Canada 🇨🇦 on February 27, 2020
Verified Purchase
Simple, yet so wondeful. The illustrations are breathtaking ♡
Read more
One person found this helpful
Helpful
Report abuse
See all reviews

Dr. Catherine Butler
3.0 out of 5 stars What happened to the Spanish?
Reviewed in the United Kingdom 🇬🇧 on September 16, 2019
Verified Purchase
It's a 4-star book for me book, but this edition loses another star because it has stripped out the Hispanic elements of the original. Julián is now Julian, his abuela is his Nana, and 'mijo' has turned into 'honey'. For a book that celebrates diversity, this erasure of Hispanic culture and language is pretty disappointing!
Read more
86 people found this helpful
Report abuse

Caroline Clary
5.0 out of 5 stars Stunning!
Reviewed in the United Kingdom 🇬🇧 on August 1, 2018
Verified Purchase
Where to begin?? This is an absolute joy from start to finish, from the minimalist text to the fantastic facial expressions of both Julian and his Nana, every page is a feast. The story is incredibly visual which will enable even the youngest of children to enjoy it, and would be a wonderful prompt for pictures of your or your child's own. Best of all, for me, it took me back to those heady days when my child was small and not concerned whether their playthings were for girls or boys, and just played how they wanted. Nana is the parental figure we all need in our lives... calm, accepting, enabling and Julian is completely and totally a mermaid - perfect!
Read more
25 people found this helpful
Report abuse

Zephyr
2.0 out of 5 stars Stunning pictures, but lacking in words
Reviewed in the United Kingdom 🇬🇧 on October 25, 2020
Verified Purchase
I bought this for my 6yo who is non-binary/trans. I had thought it was about a transgender child on a journey of discovery and acceptance. I was hoping my child would relate to Julian and that the story may help them to express their feelings. We've read it twice, once while aged 6 and once aged 7. Neither of us really "got" it. It was disappointing after the great press reviews. The illustrations are stunning, but they don't explain Julian's thoughts or feelings beyond him wanting to be a mermaid, and worrying that his Nana wouldn't approve. He secretly dresses as a mermaid. He looks great! Very flamboyant, more like a drag queen, or a dancer at Carnival. Nana is very accepting of Julian's appearance, and they go off to a parade where he sees adults dressed up similar to him - possibly a LGBTQI Pride Parade, possibly a carnival. I had to fill in the gaps in the narrative and explain it as we read. Perhaps that's the idea...? Personally I prefer more narrative, and less gaps to fill. It's not for us. I will give it to school or another LGBTQI family.
Read more
6 people found this helpful
Report abuse

One Man Book
5.0 out of 5 stars This book is Everything
Reviewed in the United Kingdom 🇬🇧 on March 30, 2020
Verified Purchase
From a supportive Nana to a creative Child who is allowed to be himself, the illustrations are stunning and truly allows for the child reading's imagination to follow along with Julian's journey. We love that Julian is a mermaid and our daughter often plays with her sheets in the same way, and knows that all children are allowed to dream and play and be themselves. Highly recommend for every household.
Read more
12 people found this helpful
Report abuse

susan Yardley
1.0 out of 5 stars Rubbish
Reviewed in the United Kingdom 🇬🇧 on May 15, 2020
Verified Purchase
Was recommended this book for my daughter age 7, but we both didn’t enjoy it at all.
Read more
14 people found this helpful
Report abuse
See all reviews