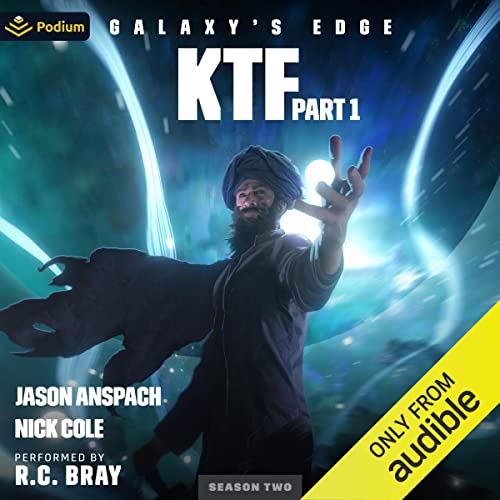 As Kill Team Victory and General Chhun take control of the cities on Kima, a war every bit as spiritual as it is physical rages in the deepest parts of galaxy’s edge.

The Legion and the Republic military at large struggle to deal with a sudden multitude of planetary invasions and uprisings, with rumors of mysterious ships breaking the peace achieved by Article Nineteen.

Meanwhile, Captain Aeson Keel continues his search for Prisma, aided by friends from both his past and present. But only mankind’s oldest ally can hold back the tide of ultimate destruction. For an unknown darkness is closing in, and the Republic once again stands on the threshold of galactic war.

Join us for this, the first entry in the thrilling two-part conclusion to Galaxy's Edge Season 2!

Includes a special note from the author.

4.7 out of 5 stars
4.7 out of 5
538 global ratings
How are ratings calculated?
To calculate the overall star rating and percentage breakdown by star, we don’t use a simple average. Instead, our system considers things like how recent a review is and if the reviewer bought the item on Amazon. It also analyzes reviews to verify trustworthiness.

There are 0 reviews and 12 ratings from Canada

Stormageddon
5.0 out of 5 stars brace yourself this is big
Reviewed in Australia 🇦🇺 on October 10, 2022
Verified Purchase
Great coalition of every story so far setting up for a big climax in book 2
Thankfully there is a who’s who at the start to remind you who many of the great characters from previous stories are.

kindle avid reader.
4.0 out of 5 stars Great getting the band back together
Reviewed in the United States 🇺🇸 on October 1, 2022
Verified Purchase
Very fast action followed by a bit of rambling, speed read over, then back to action. All the
Characters back and some promised in next book..
One of best space opera on Amazon Kindle or anywhere..
Many a midnight hour spent in my lift chair with jug of water and oatmeal cookie. Getting old has to have
Some rewards. Thanks guys, as always at last writers who know the military and also know what a bunch of kelhorns
Politicians are.
Oh and I forgive you for being Army, someone has to do the grunt work well we are in the rack after a nice shower
on the ship. Go Navy. By way squadron HC-1 were the guys picking you out of water.
Read more
One person found this helpful
Report abuse

Kindle Customer
5.0 out of 5 stars Fast paced action that keeps fans pining for more, more, more!
Reviewed in the United States 🇺🇸 on September 23, 2022
Verified Purchase
Anspach and Cole have created a galaxy on fire (it's a dumpster fire) and apparently no way to put it out of maybe, even contain. Played out over hundreds of years by Legionaires waking from echo sleep the battles.rage on in big cities, small jungles, back allies.and dusty dark.places. The whole thing is going wrong and Keep aka.Wrath is.doing his sincerest to kill anyone who makes.it worse. So a whole lotta.killing is going on. Meanwhile, the Legion ia.fighting brush wars.stirred up my Mid Core Rebels and the.long he'll bed Savages. It's tipsy turvy, knuckles and nuts fighting and these two guys tell it like you are there.
Read more
One person found this helpful
Report abuse

Cliente de Kindle
5.0 out of 5 stars What a universe!!!
Reviewed in the United States 🇺🇸 on December 6, 2022
Verified Purchase
I thing the only book universe that could compare to Galaxy's Edge in termes of complexity and entertainement is the disco world series by Terry Pratchet... Every book of this serie Galaxic Edge is a piece of jewelery. At first three book I said wow it's like star wars but with testosterones and strom troopers that can aim and hit their target!! But the political shenanigans were ritcher and masterly passed. This series (all the books) are fantastic to read... You could not read most and still get a solid tale tell or you could read them all and get a strong picture of a millenium tragedy that starts with the waste of our lovely planet.
Read more
Report abuse

Fitzgerald
5.0 out of 5 stars So much has become clear! lots to process.
Reviewed in the United States 🇺🇸 on September 20, 2022
Verified Purchase
Timelines, dimensions, personalities, strategies, and more are suddenly clear as day and the final fight is here. All of our favorite characters are getting closer to uniting under the general’s final plan to stop the savages.

Kill Team Ice, Victory, and Zombie are at the forefront and we lose some good people as every thing finally revealed.

And earth is the key.
Read more
One person found this helpful
Report abuse
See all reviews