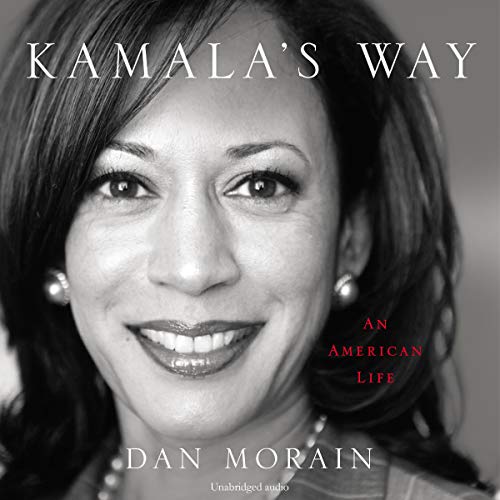 A revelatory biography of the first Black woman to be elected vice president of the United States.

In Kamala’s Way, longtime Los Angeles Times reporter Dan Morain charts how the daughter of two immigrants born in segregated California became one of this country’s most effective power players. He takes listeners through Harris’ years in the San Francisco District Attorney’s Office, explores her audacious embrace of the little-known Barack Obama, and shows the sharp elbows she deployed to make it to the US Senate. He analyses her failure as a presidential candidate and the behind-the-scenes campaign she waged to land the vice president spot. And along the way, Morain paints a vivid picture of her family, values and priorities, as well as the missteps, risks and bold moves she’s made on her way to the top.

Kamala’s Way is a comprehensive account of the vice president-elect and her history-making career.

Our best offer yet
Get 3 months free!
Limited time offer. Get started
Learn more about membership
List Price: $19.66
You Save: $2.46 (13%)
By completing your purchase, you agree to Audible's Conditions Of Use and Amazon's Privacy Notice. Tax where applicable.
Sold and delivered by Audible, an Amazon company
Share

4.7 out of 5 stars
4.7 out of 5
554 global ratings
How are ratings calculated?
To calculate the overall star rating and percentage breakdown by star, we don’t use a simple average. Instead, our system considers things like how recent a review is and if the reviewer bought the item on Amazon. It also analyzes reviews to verify trustworthiness.
Top reviews

Alistair
4.0 out of 5 stars Interesting if lightweight biography
Reviewed in the United Kingdom on June 28, 2022
Verified Purchase
This is an accessible if slightly lightweight biography of the current US Vice President. Her early life, career and motivations are captured well, post 2016 and the 2020 election less so.
In some ways the biography shows the weakness of the American system with Harris as a political operative constantly looking for the next move up, attorney general, senate, presidential run, fundraising, sitting on boards, no wonder the day job gets neglected and decisions are made about how they will play out politically.
The author writes with balance but there is a lack of direct interviews with the subject and no photographs (not an issue per se but photographs are referenced in the text e.g of a senators 4 year old daughter giving Joe Biden "a look" so it would have been beneficial to see it).
California politics is covered well.
All in all Harris has an interesting, perhaps inspiring, back story but she is over promoted and just doesn't ring true. An updated biography covering her period as VP would be interesting , just hopefully not into the top job..

Amazon Customer
3.0 out of 5 stars Is she Real
Reviewed in the United Kingdom on September 14, 2021
Verified Purchase
If this is a true account of her life so far, people like her should not hold any form of office over the populous

but she's no different to the average person in power over people.
Read more
One person found this helpful
Report abuse

Dickie Arbiter
5.0 out of 5 stars Madam vice President
Reviewed in the United Kingdom on May 27, 2021
Verified Purchase
Dan Mirain, I believe, has written an honest biography about a woman destined for the White House Oval Room. To be the first woman President of the United States of America Kamala Harris must be it. Kamala's Way is a good factual read that does its best not to get the reader bogged down in minutae
Read more
Report abuse

Gerry
5.0 out of 5 stars Essential reading if you are American
Reviewed in the United Kingdom on February 16, 2021
Verified Purchase
An easy read, pulls no punches. Describes Kamala warts & all. She could be the best POTUS ever
Read more
3 people found this helpful
Report abuse