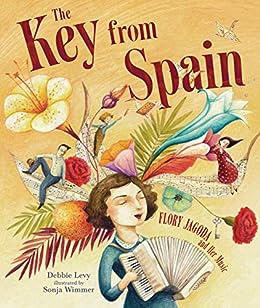 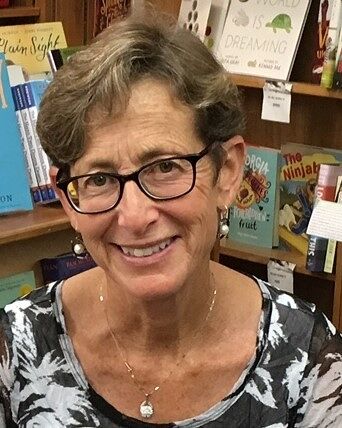 The Key from Spain: Flory Jagoda and Her Music Kindle Edition

When Flory's ancestors are forced to leave Spain during the time of the Spanish Inquisition, they take with them their two most precious possessions—the key to their old house and the Ladino language. When Flory flees Europe during World War II to begin a new life in the United States, she carries Ladino with her, along with her other precious possessions—her harmoniku and her music. But what of the key?

"When the Altaras family leaves Spain following the Inquisition, they carry a key to their old house and
Ladino, the spoken language of Sephardic Jews. In 1923, a girl named Flory is born into the Altaras family
in Bosnia. She loves Ladino, music, and the harmoniku (accordion) given to her by her nona
(grandmother). In 1941, Flory must flee the Nazis, and playing music keeps her from being unmasked as a
Jew. Later, she immigrates to America as a war bride, sharing music and Ladino with all. Levy's succinct
text conveys the highlights of Jagoda's life as well as her love of the folk music that is central to Ladino
culture. Wimmer's artwork utilizes maps, dates, and other imagery to convey a sense of the many time
periods and places depicted. She also works Ladino words and phrases into her art, using strategic
placement to ensure readers will grasp the meanings. With further information about Jagoda and links to
her performances, this is a worthy (though fictionalized) homage to a language and its fervent promoter."― Kay Weisman, Booklist

The 'key' of the title has a dou­ble mean­ing. Levy begins the sto­ry long before Jagoda’s birth in Spain, or Al-Andalus, the Ara­bic name for the Iber­ian Penin­su­la dur­ing the Ear­ly Mid­dle Ages. Many years of rel­a­tive­ly peace­ful coex­is­tence between Mus­lims, Chris­tians, and Jews end­ed in 1492, when the Span­ish monar­chy expelled non-Chris­tians, includ­ing Jagoda’s ances­tors. The Altaras fam­i­ly left with two parts of their lega­cy: the small key to their Span­ish house, and the great and unfor­get­table key of their lan­guage. Levy presents the his­tor­i­cal mate­r­i­al in an engag­ing way, con­vey­ing to young read­ers the most impor­tant events after the Altaras found a new home in Bosnia. Through­out the book, select­ed pages end with a sim­u­lat­ed curl upwards and a date print­ed in large font, pro­vid­ing a time­line for the narrative.

Like Yid­dish, which has Ger­man­ic gram­mar but many words incor­po­rat­ed from Hebrew and oth­er lan­guages, Ladi­no is root­ed in medieval Span­ish, with vocab­u­lary bor­rowed from the lands where the Sephardim set­tled, as well as from Hebrew and Ara­ma­ic. Levy’s descrip­tion of the Sephardim’s trans­plant­ed world is joy­ous and rich, but not exot­ic. Flo­ry grows up in a musi­cal fam­i­ly which, cen­turies after being forced out of Spain, still strong­ly iden­ti­fies with its past. The book’s text and pic­tures bring dai­ly activ­i­ties to life, from rit­u­al prac­tices to warm social inter­ac­tions with Flory’s friends and neigh­bors. When a Nazi pup­pet régime takes over Croa­t­ia, where her fam­i­ly had moved, Flory’s world of secure con­nec­tions is shat­tered. Levy recounts Flory’s per­ilous escape with ten­sion but not ter­ror, and Wimmer’s image of a young Jew­ish girl on a crowd­ed train, serene­ly play­ing the accor­dion with eyes closed, express­es her strength. This is a book which shows the dan­ger­ous real­i­ties of Jew­ish his­to­ry in a way which chil­dren can process.

The book con­cludes with Flory’s suc­cess­ful career, open­ing her cul­ture to oth­ers with the key of art and faith­ful­ness to her past. There is a brief sec­tion doc­u­ment­ing her hon­ors and giv­ing more infor­ma­tion about her life. Read­ers can scan a QR code in the shape of a key to hear Flo­ry Jagoda’s per­for­mance of the Hanukkah clas­sic, 'Ocho Kandelikas.'

The Key from Spain is high­ly rec­om­mend­ed both for chil­dren and adults inter­est­ed in learn­ing about Sephardic cul­ture and history."―Jewish Book Council

"Immigrant musician Flory Jagoda preserved a repertoire of Ladino and Sephardic songs learned from her Bosnian Jewish family. A descendant of the Altaras family forced to leave Spain during the Inquisition, Flory and her family must now escape from the Balkans during World War II. Crucial to the story of the Altaras' 16th-century exodus are the two symbols of their heritage: a key for their original home in Spain and Ladino, the traditional language of Spanish Jews. In the 20th century, Flory's childhood is filled with the stories Nona tells about their ancestors and the music played and sung in Ladino by her talented family. Living in peace and harmony among Jews, Christians, and Muslims, their happy life is threatened as the perils of World War II approach. Fortunate to escape the death the rest of her family suffers, Flory eventually sails to the U.S. without the important key but with her own three significant symbols: her accordion, her Ladino, and her music. Levy gently weaves the history of the Sephardim into the story of Flory's specific Balkan Jewish life, also blending in some italicized Ladino phrases and words (unfortunately, rendering "grandfather" as "Nonu" rather than the traditional "Nono"). Lovely mixed-media illustrations limn several scenes across the centuries, adding perspective to an element of Sephardic culture that is mostly unknown today in American Jewish circles. Based on a true story, an inspirational reclamation of history."―Kirkus Reviews

"Levy’s captivating picture book biography tells the story of Flory Jagoda, known today as the 'Keeper of the Flame' of Sephardic culture and music. The narrative begins centuries after Flory’s descendants, the Altaras family, were expelled from Spain during the Inquisition due to their Sephardic identity. After centuries of living peacefully in Bosnia, Flory’s family had to escape the dangers of World War II for the same reason. Forced to flee her home for America, Flory relied on music to stay connected to her family’s heritage, even as war ravaged her home and stole away her loved ones. Levy’s writing and Wimmer’s mixed-media illustrations strike the perfect synergy, working together to celebrate music, heritage, and family histories. The writing is poetic and lyrical, effortlessly weaving centuries of history into the story while maintaining a strikingly intimate tone. Wimmer’s illustrations are nuanced, and readers will enjoy discovering new details upon each rereading of the book. VERDICT A beautifully crafted story that touches on a lesser-known historical topic. Together, the words and pictures convey musicality without a single note of harmoniku, Flory’s instrument of choice, having to be played. This work is a must-purchase for library collections."--School Library Journal

― Journal --This text refers to the paperback edition.

Debbie Levy is the author of more than 25 books of nonfiction, fiction, and poetry for young people, including New York Times best-selling I Dissent: Ruth Bader Ginsburg Makes Her Mark, winner of the Sydney Taylor Book Award and National Jewish Book Award. Debbie is a former lawyer and newspaper editor, and lives in Maryland with her husband.

Sonja Wimmer loves painting pictures and telling stories. After studying and working some years as a designer in her hometown Munich and Brussels, she decided to pack her suitcase and move to Barcelona to study Illustration at the "Llotja" Arts and Crafts School. Since then she lives between brushes and all kinds of wonderful tales, working as freelance illustrator for publishing houses and other clients around the world.

I write books — nonfiction, fiction, and poetry — for people of all different ages, and especially for young people. Before starting my writing career, I was a newspaper editor; before that, I was a lawyer with a Washington, D.C. law firm. I have a bachelor’s degree in government and foreign affairs from the University of Virginia, and a law degree and master’s degree in world politics from the University of Michigan. I live in Maryland with my husband. We have two grown sons. Besides writing, I love to kayak, boat, fish, and otherwise mess around in the Chesapeake Bay region.

4.1 out of 5 stars
4.1 out of 5
17 global ratings
How are ratings calculated?
To calculate the overall star rating and percentage breakdown by star, we don’t use a simple average. Instead, our system considers things like how recent a review is and if the reviewer bought the item on Amazon. It also analyzes reviews to verify trustworthiness.