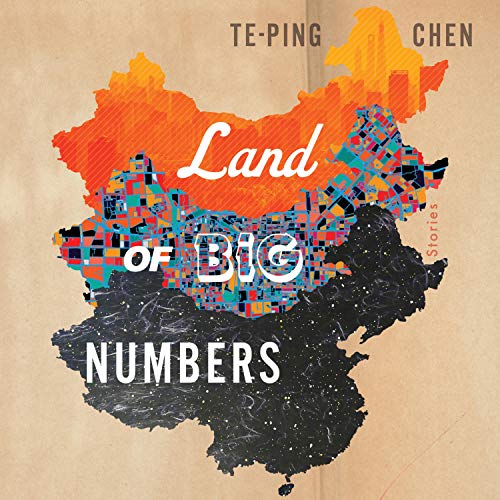 “Gripping and illuminating.... At the heart of Te-Ping Chen’s remarkable debut lies a question all too relevant in 21st Century America: What is freedom?” (Jennifer Egan)

“Immensely rewarding, from the first sentence to the last...An exceptional collection.” (Charles Yu)

A debut collection from an emerging “fiction powerhouse,” vivid portrayals of the men and women of modern China and its diaspora that “entertain, educate, and universally resonate” (Booklist, starred review).

Gripping and compassionate, Land of Big Numbers traces the journeys of the diverse and legion Chinese people, their history, their government, and how all of that has tumbled - messily, violently, but still beautifully - into the present.

Cutting between clear-eyed realism and tongue-in-cheek magical realism, Chen’s stories coalesce into a portrait of a people striving for openings where mobility is limited. Twins take radically different paths: one becomes a professional gamer, the other a political activist. A woman moves to the city to work at a government call center and is followed by her violent ex-boyfriend. A man is swept into the high-risk, high-reward temptations of China’s volatile stock exchange. And a group of people sit, trapped for no reason, on a subway platform for months, waiting for official permission to leave.

With acute social insight, Te-Ping Chen layers years of experience reporting on the ground in China with incantatory prose in this taut, surprising debut, proving herself both a remarkable cultural critic and an astonishingly accomplished new literary voice.

Read more
©2021 Te-Ping Chen (P)2021 HarperCollins Publishers
Previous page
Next page
Learn more about membership
List Price: $28.59
You Save: $3.57 (12%)
By completing your purchase, you agree to Audible's Conditions Of Use and Amazon's Privacy Notice. Tax where applicable.
Sold and delivered by Audible, an Amazon company
Share

4.3 out of 5 stars
4.3 out of 5
311 global ratings
How are ratings calculated?
To calculate the overall star rating and percentage breakdown by star, we don’t use a simple average. Instead, our system considers things like how recent a review is and if the reviewer bought the item on Amazon. It also analyzes reviews to verify trustworthiness.
Top reviews

Gabriel Stein
3.0 out of 5 stars Not bad
Reviewed in the United Kingdom on August 16, 2021
Verified Purchase
Another book that I’m not sure why I bought or what I expected. It was a pleasant enough read. Not fantastic, but very nice
Read more
Report abuse

Kindle Customer
3.0 out of 5 stars Not what I expected but a good read anyhow.
Reviewed in the United Kingdom on January 6, 2022
Verified Purchase
A good read,was recommended to me but it took me a while to finish as it didn't grasp me as I expected.
Read more
Report abuse

K.W.
2.0 out of 5 stars Too real to western readers, too fake to Chinese readers and people who know the real China
Reviewed in the United States on July 10, 2021
Verified Purchase
It is sad that literature can be very powerful in both positive and negative ways. When it is powerful in the wrong way, all of us pay a price for it. I welcome the ugly truth about our world artfully and honestly depicted in fiction, but disdain nitpicking some human pains and problems to paint them as a common life for a people and hint at the helplessness and evilness of the greater society.

I can clearly see the writer's years of experiences as a western journalist (WSJ) based in China give her the materials for her stories. The problem is, western media have more or less always focused on the negative sides and problems of China, which is what she did, and by doing so she willingly or unwillingly misled the reader into a mindset of the western mainstream media. So, what do we learn from these stories? They boil down to all things negative - lack of freedom, repressive government, people being beaten by police, people wronged by the army/government/boss, and youngsters fight for freedom, etc. Oh, that hopeless feeling - sure, the roads and malls are fantastic but what is the point when they don't have freedom and human rights? Chinese people are wonderful people, we like them and feel for them. We just don't like the government and the system.

Mind you, the government has the support of 90%+ of the people.

The real China is quite different - it is vastly more complex, dynamic, and uplifting. Unfortunately we don't see from this collection of stories the uplifting part . Why is that important? Number one, that's the main trend and dominant theme in everyday Chinese lives. Number two, if all the books about China are like this book, then there will be more misconception of China amongst westerners and the ultimate price might be a nuclear war between the U.S. and China.

The first story, Lulu, reminds me of the writer's limitation in her real-life experiences with everyday Chinese families. There are small details that are not believable. For example, in China people don't go out to buy flour and bean paste on the first day of Chinese New Year. They would have prepared everything before New Year's eve and spent the first few days of the new year visiting with relatives and friends or celebrating via endless meals and partes. There is always enough, or often too much, to eat during the CNY, so no need to go out to buy cooking materials.

Another example is that the majority of Chinese netizens who use VPN to bypass China's Great Wall of internet are usually shocked by how biased, negative, and distorted western media's reporting on China is. As a result, they become a stronger supporter of the government of China if they were not one to begin with. Lulu using VPN to see more of the outside world and then turning into an staunch activist against the government is too unbelievable, and does not represent the reality.

I don't deny that there are youngsters like Lulu in China. However, she is an odd one out; the young generations are nothing like her. Lulu might be one in a million, which does not automatically make her story worth-reading. Yes, everyone wants a more prosperous and free society, but they don't try to achieve that by rebelling and protesting. Instead, they try to change society for the better through hard work with real results. They think the country is in the right direction and the government has been doing the right thing for the most part in the last three to four decades. For people who have never been to China, they read this collection of stories and feel sorry for Chinese people's repressed lives and may even be inspired to do something for them. What do they do? They want to blame and change the CPC, which is counterproductive and dangerous when the government and the system is supported by 90% of the people.

Let me leave you with what the protagonist said in Lulu, "If this country were a vegetable, it would be a rotten, bitter melon." Now you really feel sorry for Lulu and for the Chinese people, don't you? Don't be, because what you have read is only fiction. The real China is so different...
Read more
28 people found this helpful
Report abuse

sz
1.0 out of 5 stars Blatant bootlicking of racist west. Not talented as writer.
Reviewed in the United States on July 11, 2021
Verified Purchase
It’s very clear that the author wrote this book to underscore existing western narratives of china and not to actual illuminate common perspectives of actual chinese people. She picks stories to show how China is a terribly sordid country. She leans into racist tropes. She rarely illuminate their inner lives. As a chinese person I can tell that she chose a western narrative instead of a truly chinese one. Most people in China are quite nationalistic and happy with their lives. Most chinese people are not happy with the western narrative that they are somehow products of an untenable situation. As a working writer myself I’m constantly looking to write and read stories of great Empathy. This work is not one of them. In the first story for instance I have no idea why the girl does anything that she does. It’s as if she inexplicably gone off the deep end without any exploration of her inner life. This cursory view of her dehumanizes her and only further adds to the dehumanization of chinese people— that the west is all too happy to do. Make no mistake the western empire is always looking for someone to blame, something to exploit. The west can only exist in conquering other nations and bringing them under their empire. And China is number one on their list. If the US starts a war with China, this book along with so many others would have contributed to that. I know the author would be fine with that. But look within yourselves to realize that chinese people are people too.
Read more
15 people found this helpful
Report abuse
See all reviews
Back to top
Get to Know Us
Make Money with Us
Amazon Payment Products
Let Us Help You
EnglishChoose a language for shopping. CanadaChoose a country/region for shopping.
© 1996-2022, Amazon.com, Inc. or its affiliates