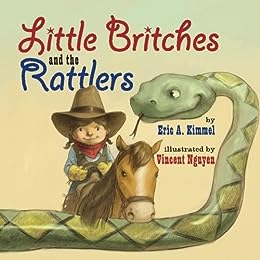 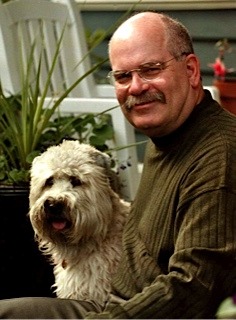 by Eric A. Kimmel (Author), Vincent Nguyen (Illustrator) Format: Kindle Edition
See all formats and editions
Sorry, there was a problem loading this page. Try again.

Little Britches saddles her pony and heads out for the rodeo. She hopes to win first prize in the calf-roping contest. Along the way, she meets seven cunning rattlesnakes. One by one, they threaten to eat her up! But Little Britches is smart. She knows how to bargain with those rattlesnakes and come out on top! Endearing graphite, watercolor, and digital illustrations by Vincent Nguyen bring this southwestern romp to an outlandish finish.

"This will make for a swell read-aloud, highlighted by the repeated threat "Little Britchch-ches, we're gonna s-s-swaller you up!" complemented by the glib silliness in Nguyen's artwork as the snakes try to fill out the little girl's clothing."
-Booklist, September 2008

"The colorful snakes look wily and ridiculous when dressed in her duds. A fun read-aloud."
-School Library Journal, September 2008

"As Little Britches saddles her pony and heads out to a calf-roping content, she decides to take a shortcut through the dry gulch. When her journey is interrupted several times by rattlesnakes who threaten to "s-s-swaller" her up, the quick-thinking, pint-sized cowgirl offers up her doeskin vest, chaps, red boots, and other attire in exchange for permission to mosey along... it's a rattling fun tale."
-Kirkus Reviews, July 15, 2008

Eric A. Kimmel lives in Portland, Oregon. Learn more about the author at www.ericakimmel.com. --This text refers to an out of print or unavailable edition of this title.

4.5 out of 5 stars
4.5 out of 5
53 global ratings
How are ratings calculated?
To calculate the overall star rating and percentage breakdown by star, we don’t use a simple average. Instead, our system considers things like how recent a review is and if the reviewer bought the item on Amazon. It also analyzes reviews to verify trustworthiness.
Top reviews

Jake
5.0 out of 5 stars Very fun to read aloud - Read it with The Story of Little Babaji
Reviewed in the United States on May 8, 2013
Verified Purchase
I teach 3-5 year-olds and we all love this book. A little girl is on her way to compete in a rodeo. She takes a short-cut through a dry gulch and, along the way, meets rattlesnakes who threaten to "swaller her up." She offers articles of her rodeo costume to placate them until she has none left to give. Each snake accepts and dons the clothing and thinks it looks handsome, smart, etc. The snakes eventually meet up and get into a dispute over who looks the best and in the process, Little Britches gets her clothes back. She makes it to the rodeo, and wins first prize in the calf-roping contest.

This book is very fun to read aloud imitating a Texas drawl, and you can make all the rattlers sound sinister as they hisssssss their Sssssssss. The illustrations are hilarious. The rattlers look very goofy in Little Britches' rodeo clothes as the reader is asked, "Didn't he look smart?" We love the snake in the vest with no arms and the snake with gloves perched on top of its head.

Little Britches is a parody of an old 1899 classic by Helen Bannerman, "The Story of Little Black Sambo," lately retitled "The Story of Little Babaji." In that story, a little boy named Little Black Sambo/Little Babaji puts on his fine new clothes and goes for a walk in the jungle. He meets tigers who threaten to "eat him up." He convinces them not to eat him in exchange for various articles of clothing, until he has none left to give. The tigers eventually come together and get into a huge dispute about who looks the grandest, and in the process the boy gets his clothes back and some very special pancakes.

We read the two books as a pair. Even preschoolers are old enough to grasp the concept of a parody and they appreciate the humor.
Read more
Report abuse

Audiobook lover
3.0 out of 5 stars Little black Sambo goes west
Reviewed in the United States on May 3, 2014
Verified Purchase
For those old enough to remember, this is Little Black Sambo with snakes instead of tigers, etc., and without the pancakes. I guess the author figured the basic story was worth keeping, and this book does a good job. Anybody remember Sambo's restaurants in the 60s?
No offense meant to anyone, BTW. I'm just an old timer grandma enjoying sharing a good story with her little little ones while I remember the past.
Read more
3 people found this helpful
Report abuse

kindergarten teacher
5.0 out of 5 stars More Text-to-Text Connection Fun
Reviewed in the United States on March 20, 2013
Verified Purchase
Jan Brett and Eric Kimmel are two of my class's favorite authors so to be able to recall
Jan Brett's Trouble with Trolls and connect it to Little Britches and the Rattlers was a
special treat! The class loved the illustrations and laughed themselves silly with the snakes
all dressed up in western "duds."
Read more
Report abuse

4theKids
5.0 out of 5 stars My kids loved it.
Reviewed in the United States on April 13, 2013
Verified Purchase
I read with my kids every night before bed and are always on the lookout for a new book or two. We decided to give this one try because my daughter loves anything with a horse in it. It turned out to be a cute story that both my kids liked.
Read more
Report abuse

Night Reader
4.0 out of 5 stars read to a 2.5 year old
Reviewed in the United States on June 22, 2014
Verified Purchase
I bought this for my granddaughter. She enjoyed it if it was read with an accent and expression. Otherwise, a straight read would not hold her attention. She really liked the snakes. But she is a little young for this book.
Read more
Report abuse
See all reviews
Report an issue
Does this item contain inappropriate content?
Report
Do you believe that this item violates a copyright?
Report
Does this item contain quality or formatting issues?
Report