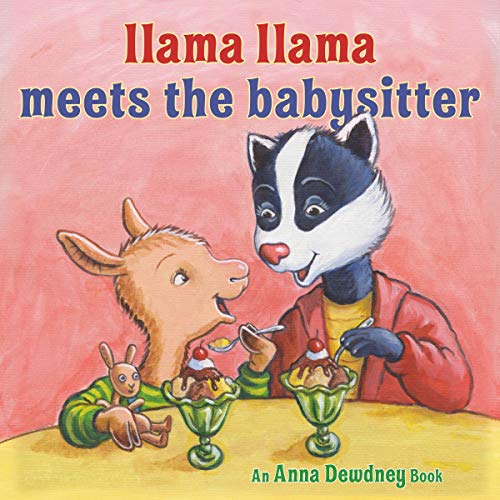 "I have something new to talk about...tonight I will be going out", Mama gently tells Llama Llama.

At first, Llama feels okay with this. After all, Mama has gone out before and Gram and Grandpa have stayed with him. But this time they can't. Someone new is coming over, and the more he thinks about it, the more he worries! He knows he will be miserable...and then the doorbell rings. It's Molly from the ice cream store. What is she doing here? And she has ice cream! Maybe having a new babysitter isn't nearly as bad as he thought!

Get 3 months of Audible for only $5.95/mo!
You get 3 credits and unlimited access to podcasts, originals and more.
Limited time offer! Get started
Learn more about membership
List Price: $8.77
You Save: $1.10 (13%)
By completing your purchase, you agree to Audible's Conditions Of Use and Amazon's Privacy Notice. Tax where applicable.
Sold and delivered by Audible, an Amazon company
Share

4.9 out of 5 stars
4.9 out of 5
342 global ratings
How are ratings calculated?
To calculate the overall star rating and percentage breakdown by star, we don’t use a simple average. Instead, our system considers things like how recent a review is and if the reviewer bought the item on Amazon. It also analyzes reviews to verify trustworthiness.

cfonde
3.0 out of 5 stars Cute but not as good as others
Reviewed in the United States 🇺🇸 on July 7, 2021
Verified Purchase
The concept is great and easy to understand for young children. It is not as well-written as other llama llama books and several rhymes don’t flow/actually rhyme. My two year old still loves it, but It’s not as good as our usual beloved Anna Dewdney books.
Read more
3 people found this helpful
Report abuse

Mariah
2.0 out of 5 stars Not a fan
Reviewed in the United States 🇺🇸 on July 1, 2021
Verified Purchase
Not the usual quality I've come to expect from Llama Llama books. It doesn't flow well and feels too wordy at times- my four year old who is obsessed with Llama Llama books was totally uninterested.
Read more
3 people found this helpful
Report abuse

suez
5.0 out of 5 stars Love love love
Reviewed in the United States 🇺🇸 on August 21, 2021
Verified Purchase
As a teacher, I buy books for my kids under my care for their birthday and of course one for myself. Whenever i read my book, the kids that i gave this book to, say, hey, you gave me that book. Some have it memorized and they are 3 and 4 years old
Read more
Report abuse

Shawn Mcglasson
4.0 out of 5 stars Cute book
Reviewed in the United States 🇺🇸 on March 18, 2022
Verified Purchase
My daughter loves this book! So cute and catchy.
Read more
Report abuse

Nicholas Apicella
5.0 out of 5 stars Llama Llama having a good time as usual
Reviewed in the United States 🇺🇸 on September 2, 2021
Verified Purchase
Baby loves the Llama Llama series so this was another great addition to the library.
Read more
Report abuse
See all reviews