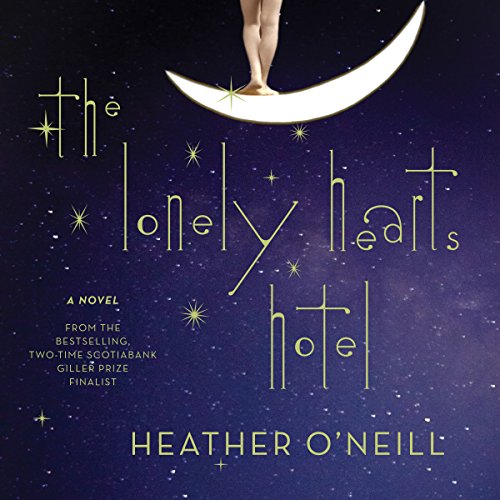 The Lonely Hearts Hotel: A Novel

Set in Montreal and New York between the wars, a spellbinding story about two orphans whose unusual magnetism and talent allow them to imagine a sensational future, from the best-selling, two-time Scotiabank Giller Prize-short-listed author.

Exquisitely imagined and hypnotically told, The Lonely Hearts Hotel is a love story with the power of legend. Set in the early part of the 20th century, it is an unparalleled tale of abandoned children, radicalized chorus girls, drug-addicted musicians, brooding clowns, and an underworld whose fortune hinges on the price of a kiss. In a landscape like this, it takes great creative gifts to escape one's origins. It might also take true love.

Two babies are abandoned in a Montreal orphanage in the winter of 1914. Before long their true talents emerge: Pierrot is a piano prodigy; Rose lights up even the dreariest room with her dancing and comedy. As they travel around the city performing for the rich, the children fall in love with each other and dream up a plan for the most extraordinary and seductive circus show the world has ever seen.

Separated as teenagers, both escape into the city's underworld, dabbling in sex, drugs, and theft in order to survive. Ruthless and unforgiving, Montreal in the 1930s is no place for song and dance. But when Rose and Pierrot finally reunite beneath the snowflakes, the possibilities of their childhood dreams are renewed, and they'll go to extreme lengths to make those dreams come true. After Rose, Pierrot, and their troupe of clowns and chorus girls hit the stage and the alleys, the underworld will never look the same.

With extraordinary storytelling, musical language, and an extravagantly realized world, acclaimed author Heather O'Neill enchants us with her best novel yet - one so magical there is no escaping its spell.

Our best offer yet
Get 3 months free!
Limited time offer. Get started
Learn more about membership
List Price: $40.01
You Save: $5.00 (12%)
By completing your purchase, you agree to Audible's Conditions Of Use and Amazon's Privacy Notice. Tax where applicable.
Sold and delivered by Audible, an Amazon company
Share

4.2 out of 5 stars
4.2 out of 5
349 global ratings
How are ratings calculated?
To calculate the overall star rating and percentage breakdown by star, we don’t use a simple average. Instead, our system considers things like how recent a review is and if the reviewer bought the item on Amazon. It also analyzes reviews to verify trustworthiness.
Top reviews

Dee
3.0 out of 5 stars Definely A Different Book
Reviewed in Canada on February 12, 2019
Verified Purchase
I am still trying to decide if I liked this book or not, the ending was a bit disappointing. There seemed to be lots of descriptive language and a lot of odd stuff that you can't picture happening in the real world but I must say it all held my interest and pushed me to keep reading even through all while I was reading I wasn't sure if I liked the book or not. Interesting read and very different than what I usually read
Read more
4 people found this helpful
Helpful
Report abuse

Navi
5.0 out of 5 stars 5 stars!
Reviewed in Canada on February 28, 2020
Verified Purchase
One of my goals this year is to read more books by Canadian authors. I am SO happy I picked this book up. It was sitting on my Kindle since 2017 when it was long listed for the Women's Prize. It blows my mind that it was not short listed (and that it did not win!). This is a beautiful, dark and gritty book about love, childhood innocence, missed opportunities, imagination, art and so much more. I was completely enraptured throughout the whole narrative. This is a book that I will definitely be revisiting in the future. Highly recommend!
Read more
One person found this helpful
Helpful
Report abuse

JRSC
3.0 out of 5 stars I usually enjoy mysteries, and stories with psychological depth but perhaps ...
Reviewed in Canada on January 15, 2018
Verified Purchase
While this book was described honestly as an overview, I found the story disturbing and unsettling. Perhaps this is an accurate account of the lives of these children but I was left feeling dismayed at the end. The writing is quite well done so I have no complaints about the author’s ability to tell a tale, I just wish I wasn’t left feeling so disenchanted with life in general when I finished reading the book. I usually enjoy mysteries, and stories with psychological depth but perhaps this book just isn’t my thing. I suppose I was hoping for a happier outcome but then again perhaps the author would have felt it made it more of a fairytale. I have rated it 3 stars because the writing is very good.
Read more
4 people found this helpful
Helpful
Report abuse

Marina
5.0 out of 5 stars Heartbreaking
Reviewed in Canada on August 19, 2021
Verified Purchase
Although this would be my second time reading this, I found myself having to put down the book at multiple occasions because it was overwhelming emotionally (in the best way possible). I absolutely adore Heather O’Neill’s writing and I think everyone should read at least one of her books, and this is a great one to give a chance to!
Read more
One person found this helpful
Helpful
Report abuse

Paper Mate
5.0 out of 5 stars A delight for heart and brain
Reviewed in Canada on April 15, 2017
Verified Purchase
One of the most delightful, engaging, heart-rending books I've ever read. And I've read a lot. With phrases that take your breath away with their simplicity, beauty and accuracy, the author weaves a truly magical tale which is ultimately grounded in harsh realities. I was so captivated by the book that I deliberately controlled how much I would read each day - I didn't want the magic to end. Wholeheartedly recommended.
Read more
6 people found this helpful
Helpful
Report abuse

Georgina Queller
3.0 out of 5 stars Unique but repetitive.
Reviewed in Canada on February 7, 2020
Verified Purchase
Our book group had lively discussion on Heather O’Neill’s Lonely Hearts’ Hotel and we found that, while the writing was often lyrical and uniquely phrased it was overburdened with similes and needed much editing. The middle section of the book was long and tedious. But on the whole it was a one of a kind, touching on many “taboo” subjects and the Montreal underworld, or you might say underbelly, in the years between the world wars.
Read more
2 people found this helpful
Helpful
Report abuse

Margaret Bougie
4.0 out of 5 stars An example of this superb writing tells it all. ...
Reviewed in Canada on March 27, 2017
Verified Purchase
An example of this superb writing tells it all..."a young girl's body is the most dangerous place in the world, as it is the spot where violence is most likely to be enacted". This story touches our hearts, depicting the lives of those fragile individuals who have been abandoned by society.
Read more
4 people found this helpful
Helpful
Report abuse
See all reviews

Mags Duggan
2.0 out of 5 stars Two Stars
Reviewed in the United Kingdom on June 21, 2017
Verified Purchase
Started great for me it ran out of steam
Read more
Report abuse

st clair
4.0 out of 5 stars Can highly recommend this book
Reviewed in Australia on June 11, 2017
Verified Purchase
Can highly recommend this book. It reads a bit like a fairytale, set in Canada, everything about it is different. I loved all the characters, the hardships they endured and the sad story of their lives in the orphanage. A tragic ending though.
Read more
Report abuse

SCS
2.0 out of 5 stars sweet, brilliant turn of phrase
Reviewed in the United Kingdom on May 4, 2017
Verified Purchase
It started off so amazingly well - light, sweet,brilliant turn of phrase. It was genuinely different and beautiful. Two orphans with a dark and tragic background, a Night Circus meets Romeo and Juliet. But it quickly turned incredibly sexual and dark. I am not a prude in the slightest, but about 40-50% into the book it felt to me like a higher brow "Fifty Shades" (which I've not read, but perhaps you understand the parallel). I have no problem with sex, but after a while you just wanted the story to progress but couldn't for all the bedroom action. I gave up at 70% through it. It had so much potential and the use of language is beautiful, but just not worth the hype.
Read more
2 people found this helpful
Report abuse

Emily
5.0 out of 5 stars Something different, something wonderful
Reviewed in the United Kingdom on April 13, 2017
Verified Purchase
Fantastic story, it had me hooked on page one. I like that you never get bored of a perspective as it switches from Rose to Pierrot and back. There was a lot of vivid imagery and wonderful descriptions. I liked that it was both a love story and not!
Read more
One person found this helpful
Report abuse
See all reviews