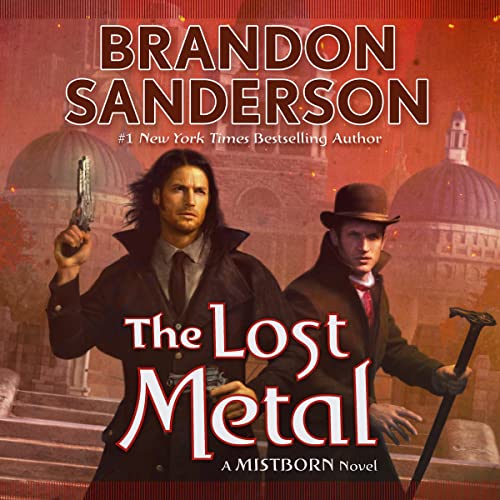 The Lost Metal: A Mistborn Novel

"Michael Kramer is my favorite among all audiobook narrators. I was thrilled to have him on the Mistborn series, and he did such an amazing job I can’t imagine having anyone else be the voice of these characters."—Brandon Sanderson

Return to #1 New York Times bestseller Brandon Sanderson’s Mistborn world of Scadrial as its second era, which began with The Alloy of Law, comes to its earth-shattering conclusion in The Lost Metal.

For years, frontier lawman turned big-city senator Waxillium Ladrian has hunted the shadowy organization the Set—with his late uncle and his sister among their leaders—since they started kidnapping people with the power of Allomancy in their bloodlines. When Detective Marasi Colms and her partner Wayne find stockpiled weapons bound for the Outer City of Bilming, this opens a new lead. Conflict between Elendel and the Outer Cities only favors the Set, and their tendrils now reach to the Elendel Senate—whose corruption Wax and Steris have sought to expose—and Bilming is even more entangled.

After Wax discovers a new type of explosive that can unleash unprecedented destruction and realizes that the Set must already have it, an immortal kandra serving Scadrial’s god, Harmony, reveals that Bilming has fallen under the influence of another god: Trell, worshipped by the Set. And Trell isn’t the only factor at play from the larger Cosmere—Marasi is recruited by offworlders with strange abilities who claim their goal is to protect Scadrial...at any cost.

Wax must choose whether to set aside his rocky relationship with God and once again become the Sword that Harmony has groomed him to be. If no one steps forward to be the hero Scadrial needs, the planet and its millions of people will come to a sudden and calamitous ruin.

Other Tor titles by Brandon Sanderson

The Way of Kings

The Well of Ascension

The Hero of Ages

Mistborn: The Wax and Wayne series

The Alcatraz vs. the Evil Librarians series

Alcatraz vs. the Evil Librarians

The Knights of Crystallia

Other titles by Brandon Sanderson

PLEASE NOTE: When you purchase this title, the accompanying PDF will be available in your Audible Library along with the audio.

4.7 out of 5 stars
4.7 out of 5
5,636 global ratings
How are ratings calculated?
To calculate the overall star rating and percentage breakdown by star, we don’t use a simple average. Instead, our system considers things like how recent a review is and if the reviewer bought the item on Amazon. It also analyzes reviews to verify trustworthiness.

Kindle Customer
5.0 out of 5 stars Another satisfying ending
Reviewed in Canada 🇨🇦 on November 23, 2022
Verified Purchase
This one made me laugh out loud a couple times because it totally made sense, but I didn't see it coming!
Read more
Helpful
Report abuse

Brenna
5.0 out of 5 stars A satisfying ending ... to be continued
Reviewed in Canada 🇨🇦 on December 5, 2022
Verified Purchase
I love the entire Mistborn saga, and am looking forward to reading the planned books, to come.
Tbe characters evolved, due to ever-increasing self awareness - becoming more than they were.
Even God and Death have evolved, though Kelsier still requires careful managing, I noticed.
Steris' arc was particularly satisfying, since neuro-divergence can be so difficult to explain. Seeing things from her perspective lifts the curtain for the neuro-typical.
I truly enjoy visiting this world.
Read more
One person found this helpful
Helpful
Report abuse
See all reviews

KH
4.0 out of 5 stars good book, 54% more expensive on .uk than .com
Reviewed in the United Kingdom 🇬🇧 on November 17, 2022
Verified Purchase
The stars are for the content but how come this is £12.99 on .UK and $9.99 on .com - 54% more for a digital download, just ripping off UK customers.
Read more
8 people found this helpful
Report abuse

Jim J-R
4.0 out of 5 stars It took me a while to get my head into it
Reviewed in the United Kingdom 🇬🇧 on December 24, 2022
Verified Purchase
The latest Mistborn novel (seriously you need a chart of work out what number this is) sees the wrapping up of the second era, following Wax and Wayne as they and their friends try to really understand what’s happening.

It took me a while to get my head into it - it’s a long time since the previous pair of novels and I had to pause to read synopses of them online to re-catch myself up. But once everything was properly loaded back in my reading sped back up.

This is probably the most Cosmerey of Cosmere books that Sanderson has output so far. I think it’s probably the least entry level novel - and there’s a lot that definitely works better if you’ve read the other Cosmere series to this point. And probably that also makes this novel required reading for everything else from here on.

A really good end to this era. I’m looking forward a lot to finding out what the next will entail.
Read more
3 people found this helpful
Report abuse

Mask
5.0 out of 5 stars An ending of multiple excellences
Reviewed in the United Kingdom 🇬🇧 on January 8, 2023
Verified Purchase
If you haven't read the others this is not a good book to read first. This is an ending. It is a powerful and exiting expansion of the Mistborn world building and the most Cosmere (Sandersons larger connected universe) aware of any of the series to date.

If you have read the rest though this includes fantastic development of all major characters, answers to long term plot arcs and the climax to their conflicts. Sanderson also uses the work to comment on self realisation, the power of forgiveness, friendship and compassion as well as the ability to transform a situation or a person. The book also effectively sets us the third promised Mistborn series fans have been aware of fir some time. A book that is an excellent conclusion but is actually more. It is multiple endings to multiple plots, characters and ideas and the seed bed for the next generation.
Read more
2 people found this helpful
Report abuse

Barry Mulvany
4.0 out of 5 stars A very Cosmere heavy book, but a good conclusion to this series
Reviewed in the United Kingdom 🇬🇧 on January 30, 2023
Verified Purchase
A few years have passed since the events of the previous book. Wax is now in politics and Maresi and Wayne are both still working for the police. The threat of civil war is getting bigger, along with potential conflict with the southern countries. Into this pot of trouble, the Set's plans are coming into play with potentially devastating consequences for Elendil.

Well we've been waiting a while for this one. I was expecting answers and we definitely got them. It was both bigger and smaller than I imagined, events definitely ramped up but not quite as much as I thought.

As mentioned above this is an incredibly Cosmere heavy book. I have read most of Sanderson's work but most of it only once, some twice, and there is so much of it now that unless you are constantly re-reading it, or have a much better memory than me, then quite a lot of the connections go over my head. Yeah some of the stuff reminded me of Elantris but most of it I hadn't a clue. I still don't think you need to know everything to enjoy it but at this stage you definitely need to know of the existence of the Cosmere and how most of his books are related. I find myself spending too much time wondering if I should really know what they are talking about or whether I've met this character before etc.

I also found all the talk of the different realms, how they interact etc is hard to follow for the more casual Cosmere fan. It is cool to be honest and if I were still in my teens, early twenties I would be all over it but it's hard to find the time now for basic reading, let alone deep dives into how all the magic systems are related etc. It takes just a little shine away from a very good book. Sanderson even made me care about Wayne in this one, which I didn't think would happen!

Though it is an end, it really is the start of something else as there is so much going on, and looks like so much more that is coming, it feels more like a joining series than an outright self-contained series. I enjoyed it a lot, the author's imagination cannot be doubted and I am constantly amazed at how well thought out the 'magic' systems are in his books. It's a very different series than the original, and it grew on me more than I expected. Now the wait begins for Mistborn Era III.
Read more
Report abuse

Malc Wells
4.0 out of 5 stars Really good, but not quite great.
Reviewed in the United Kingdom 🇬🇧 on November 17, 2022
Verified Purchase
We've waited a long time for this. I enjoyed it a great deal and there is so much to get swept up in, but the plot was less interesting than previous novels. As ever, the action is pulsating, the characters are fantastic and you are left wanting more. May well be that a second read is needed. I disliked TWOA the first time I read it, after all.
Read more
2 people found this helpful
Report abuse
See all reviews