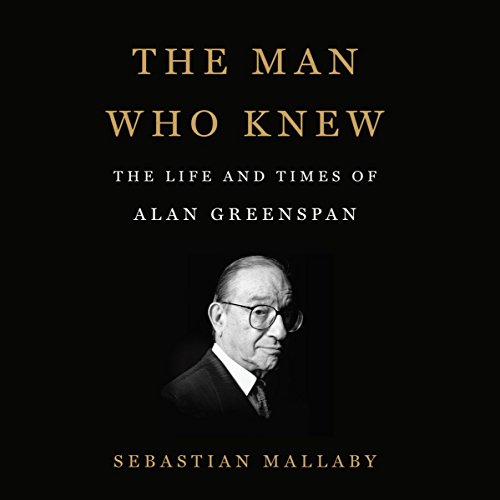 The Man Who Knew: The Life and Times of Alan Greenspan

The definitive biography of the most important economic statesman of our time, from the best-selling author of The Power Law and More Money Than God.

Sebastian Mallaby's magisterial biography of Alan Greenspan, the product of over five years of research based on untrammeled access to his subject and his closest professional and personal intimates, brings into vivid focus the mysterious point where the government and the economy meet. To understand Greenspan's story is to see the economic and political landscape of our time - and the presidency from Reagan to George W. Bush - in a whole new light. As the most influential economic statesman of his age, Greenspan spent a lifetime grappling with a momentous shift: The transformation of finance from the fixed and regulated system of the post-war era to the free-for-all of the past quarter century. The story of Greenspan is also the story of the making of modern finance, for good and for ill.

Greenspan's life is a quintessential American success story: Raised by a single mother in the Jewish émigré community of Washington Heights, he was a math prodigy who found a niche as a stats-crunching consultant. A master at explaining the economic weather to captains of industry, he translated that skill into advising Richard Nixon in his 1968 campaign. This led to a perch on the White House Council of Economic Advisers, and then to a dazzling array of business and government roles, from which the path to the Fed was relatively clear. A fire-breathing libertarian and disciple of Ayn Rand in his youth who once called the Fed's creation a historic mistake, Mallaby shows how Greenspan reinvented himself as a pragmatist once in power. In his analysis, and in his core mission of keeping inflation in check, he was a maestro indeed, and hailed as such. At his retirement in 2006, he was lauded as the age's necessary man, the veritable God in the machine, the global economy's avatar. His memoirs sold for record sums to publishers around the world.

But then came 2008. Mallaby's story lands with both feet on the great crash which did so much to damage Alan Greenspan's reputation. Mallaby argues that the conventional wisdom is off base: Greenspan wasn't a naïve ideologue who believed greater regulation was unnecessary. He had pressed for greater regulation of some key areas of finance over the years, and had gotten nowhere. To argue that he didn't know the risks in irrational markets is to miss the point. He knew more than almost anyone; the question is why he didn't act, and whether anyone else could or would have. A close reading of Greenspan's life provides fascinating answers to these questions, answers whose lessons we would do well to heed. Because perhaps Mallaby's greatest lesson is that economic statesmanship, like political statesmanship, is the art of the possible. The Man Who Knew is a searching reckoning with what exactly comprised the art, and the possible, in the career of Alan Greenspan.

Get 3 months of Audible for only $5.95/mo!
You get 3 credits and unlimited access to podcasts, originals and more.
Limited time offer! Get started
Learn more about membership
List Price: $57.02
You Save: $7.13 (13%)
By completing your purchase, you agree to Audible's Conditions Of Use and Amazon's Privacy Notice. Tax where applicable.
Sold and delivered by Audible, an Amazon company
Share

4.7 out of 5 stars
4.7 out of 5
131 global ratings
How are ratings calculated?
To calculate the overall star rating and percentage breakdown by star, we don’t use a simple average. Instead, our system considers things like how recent a review is and if the reviewer bought the item on Amazon. It also analyzes reviews to verify trustworthiness.

The Cat Mom
5.0 out of 5 stars Well written and easy to follow
Reviewed in Canada 🇨🇦 on May 13, 2017
Verified Purchase
One of the most interesting books I have read in some time. Well written and easy to follow. It must be difficult to write about such a brilliant man in such a way as to make it accessible to all without dumbing it down to an insulting level, so Mallaby must be given credit for his skills as a biographer to pull this off. Very good read!
Read more
Helpful
Report abuse

Kindle Customer
5.0 out of 5 stars A shrewd and politically cunning brilliant man that may have been unfairly vilified post 2008
Reviewed in the United Kingdom 🇬🇧 on July 20, 2017
Verified Purchase
An insight into a complex man that is Alan Greenspan and the power he wielded as Chairman of the Federal Reserve. In his defense, It's fair to say that Mr Greenspan acted based on the information available; admittedly, he was willfully blind to information or making decisions that were at odds with his beliefs. Thereby choosing his battles wisely to increase his odds of victory and influence in Washington.
Read more
One person found this helpful
Report abuse

Rajat
4.0 out of 5 stars Long but extremely through....
Reviewed in the United Kingdom 🇬🇧 on December 3, 2017
Verified Purchase
Very well written and balanced book, I started with Greenspan’s own autobiography which I thought was too self flattering. However this book is very well researched and balanced.
Read more
One person found this helpful
Report abuse

Hristo Topov
5.0 out of 5 stars Five Stars
Reviewed in the United Kingdom 🇬🇧 on May 10, 2018
Verified Purchase
I am very pleased with the book
Read more
Report abuse