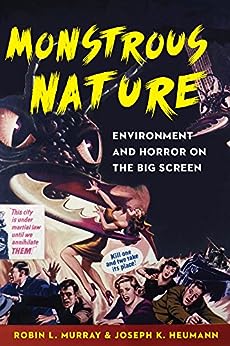 Godzilla, a traditional natural monster and representation of cinema’s subgenre of natural attack, also provides a cautionary symbol of the dangerous consequences of mistreating the natural world—monstrous nature on the attack. Horror films such as Godzilla invite an exploration of the complexities of a monstrous nature that humanity both creates and embodies.

Robin L. Murray and Joseph K. Heumann demonstrate how the horror film and its offshoots can often be understood in relation to a monstrous nature that has evolved either deliberately or by accident and that generates fear in humanity as both character and audience. This connection between fear and the natural world opens up possibilities for ecocritical readings often missing from research on monstrous nature, the environment, and the horror film.

Organized in relation to four recurring environmental themes in films that construct nature as a monster—anthropomorphism, human ecology, evolution, and gendered landscapes—the authors apply ecocritical perspectives to reveal the multiple ways nature is constructed as monstrous or in which the natural world itself constructs monsters. This interdisciplinary approach to film studies fuses cultural, theological, and scientific critiques to explore when and why nature becomes monstrous.

Robin L. Murray is a professor of English at Eastern Illinois University. Joseph K. Heumann is professor emeritus from the Department of Communication Studies at Eastern Illinois University. Murray and Heumann are coauthors of That's All Folks?: Ecocritical Readings of American Animated Features (Nebraska, 2011) and Film and Everyday Eco-disasters (Nebraska, 2014).f
--This text refers to the hardcover edition.

"Syfy Channel, horror film aficionados, and film students will no doubt be enthralled by this volume. The book challenges all readers to consider ecological messages, no matter what the mode of presentation."-Patricia Ann Owens, Journal of the Illinois State Historical Society

"From cannibals to cockroaches, Robin L. Murray and Joseph K. Heumann fill a major gap in the field with this wide-ranging treatment of horror in ecocinema. Scholarship of this kind contributes tremendously to the expansion of ecocriticism from the study of 'literature' per se to the understanding of how environmental themes, such as anthropomorphism and gendered landscapes, occur in visual culture."-Scott Slovic, coeditor of Numbers and Nerves: Information, Emotion, and Meaning in a World of Data

"Compelling. . . . Clear and meticulous. Another tremendous contribution to the field of ecocinema studies."-Stephen Rust, coeditor of Ecocinema Theory and Practice

"[Readers] will find in this new book solid scholarship, broad research in the cinematic references necessary to approach the topics, and insightful analysis and juxtaposition of films . . . all contributing to our understanding of how 'horror' is among us now in the very real prospects of violent and sudden climate change."-Charles J. Stivale, editor of Gilles Deleuze: Key Concepts
--This text refers to the hardcover edition.

Robin L. Murray teaches at Eastern Illinois University where she coordinates the film studies minor. She has co-authored five books with Joseph K. Heumann: Ecology and Popular Film: Cinema on the Edge (SUNY Press 2009), That's All Folks?:Ecocritical Readings of American Animated Features (U Nebraska Press 2011), Gunfight at the Eco-Corral: Western Film and the Environment (U Oklahoma Press 2012), Everyday Eco-disasters (U Nebraska 2014), and Monstrous Nature: Environment and Horror on the big Screen (2016). She is currently drafting a book examining the nature and the city. Her work has appeared in Film Quarterly, Interdisciplinary Studies in Literature and the Environment, Jump Cut, and other film and literary journals. For more information, she her and co-author Joe Heumann's webpage: http://rlmurray50.wixsite.com/ecocinema-and-media

There are 0 customer reviews and 2 customer ratings.
Back to top
Get to Know Us
Make Money with Us
Amazon Payment Products
Let Us Help You
EnglishChoose a language for shopping. CanadaChoose a country/region for shopping.
© 1996-2022, Amazon.com, Inc. or its affiliates