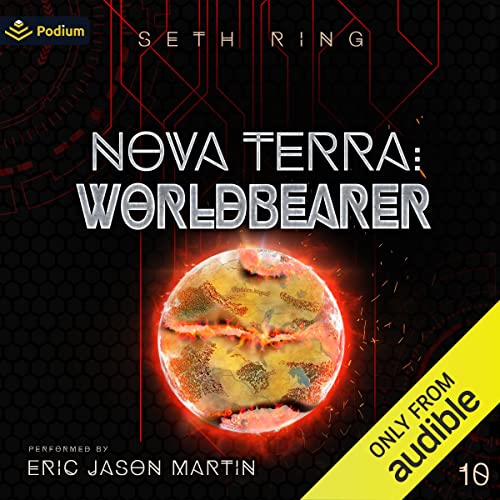 A nation torn asunder. A world at war. A mystery that will change the world forever.

No sooner had Thorn stepped into his new role as Titan of Earth than the enemies of the Duchy pounced, their armies flooding into Ironhold. With barely enough time to plan their defense, Thorn and the Wolfkin are forced into battle against forces that outnumber them five to one.

To make matters worse, other guilds who have long eyed Nova Luna’s position, are eager to cut Thorn and his friends down to size. Hemmed in by enemies on every side, the only way to overcome this world shaking challenge is to cut straight through it.

Thorn has come far since he first logged into Nova Terra. He has gained overpowered abilities and forged strong alliances, but even he is not sure if his titanic strength will be sufficient to hold Angoril together. Regardless of what happens, Nova Terra will never be the same.

Nova Terra: Worldbearer is the tenth book in the Titan Series, a GameLit/LitRPG series.

Get 3 months of Audible for only $5.95/mo!
You get 3 credits and unlimited access to podcasts, originals and more.
Limited time offer! Get started
Learn more about membership
List Price: $56.38
You Save: $7.05 (13%)
By completing your purchase, you agree to Audible's Conditions Of Use and Amazon's Privacy Notice. Tax where applicable.
Sold and delivered by Audible, an Amazon company
Share

4.8 out of 5 stars
4.8 out of 5
1,309 global ratings
How are ratings calculated?
To calculate the overall star rating and percentage breakdown by star, we don’t use a simple average. Instead, our system considers things like how recent a review is and if the reviewer bought the item on Amazon. It also analyzes reviews to verify trustworthiness.

Iokennoron Mccomber
5.0 out of 5 stars What a wild adventure
Reviewed in Canada 🇨🇦 on October 1, 2022
Verified Purchase
Holy crap!!!
I wasn't expecting those kinds of twists to Thorn's journey.
This is a series you need to read. I can write more about it but you're better off just reading it.
Seth creates characters that you'll love, you'll hate and leaves enough breadcrumbs for some other characters to have their own books written about them.

I can't wait for the next series to be published.

Connor
5.0 out of 5 stars Very well written series. I will be following anything this author writes, no matter the genre.
Reviewed in Canada 🇨🇦 on July 8, 2022
Verified Purchase
The progression of this series has been fun. I usually don’t like the genre and only stumbled upon the first books. The author is weaved the series together perfectly, one of my favourites currently writing and producing books after reading the first in the series.
Read more
Helpful
Report abuse

Efil
5.0 out of 5 stars a wonderful adventure that just keep getting bigger…
Reviewed in Canada 🇨🇦 on July 18, 2022
Verified Purchase
A truly amazing feat. Ending one adventure by starting another. Hopes and dreams and excitement. Thank you Seth for sharing with us this amazing universe. It is truly appreciated!
Read more
Helpful
Report abuse

Kindle Customer
5.0 out of 5 stars Wow, that is fantastical and magical!
Reviewed in Canada 🇨🇦 on June 29, 2022
Verified Purchase
The world building is so believable. The plotlines are so convincing. The magic so original. There is hopefully more to come. Keep up the great work! Thank you very much! I can't wait for the next book!
Read more
Helpful
Report abuse
See all reviews

Tony
5.0 out of 5 stars Excellent
Reviewed in the United Kingdom 🇬🇧 on July 16, 2022
Verified Purchase
Finishing this series off under a beautiful English summer day, with some superb NZ drum and bass plays in the background... absolute chefs kiss, 5/7.
Some storylines fell to the wayside - ragnaroks family politics? - but all in all fantastic story, easily in my top ten litrpg series.
10 books to the series, but it feels like a great prelude to the next ten, I hope the author hasn't left us one cliff hanger and will continue to write more of thorns story.
Read more
One person found this helpful
Report abuse

RWB
5.0 out of 5 stars Monster size series
Reviewed in the United Kingdom 🇬🇧 on June 18, 2022
Verified Purchase
I have enjoyed every book in this series. The MC has really evolved into something almost unbelievable. I am interested to see where the story arc goes from here, I hope to continue to follow developments. I will certainly continue to invest in this author and strongly recommend any reader dip into his back catalogue. I am sure he will continue to garner fans. Keep writing!
Read more
One person found this helpful
Report abuse

Was an epic finally to the nova terra world series, but the story won't end here, which I'm super happy about!!! Too many questions that cant be voiced here 😁 lived it 😍
Read more
One person found this helpful
Report abuse

Amazon Customer
5.0 out of 5 stars Exceptional series
Reviewed in the United Kingdom 🇬🇧 on July 11, 2022
Verified Purchase
I really enjoyed the series and read all ten of them without break. Despite some of the negative comments for the first book, I'm glad I decided to read this series. I hope to read more of Thorn and his adventures.
Read more
One person found this helpful
Report abuse

Thomas Mackenzie
5.0 out of 5 stars Just awesome
Reviewed in the United Kingdom 🇬🇧 on August 4, 2022
Verified Purchase
I've just finished the last book in this series and loved all of it. The stories developed beautifully leaving a sense of bigger things to come all through each book. I'm a big fan of LitRPG and this series did not disappoint! The battle scenes were very engaging and I often found it difficult to stop reading, only when I couldn't physically stay awake would I stop. The game style building/character builder sections were interesting and not too over the top. Really enjoyed the subtle hints at multiple words that run through this series and the promise of more to come!
Read more
Report abuse
See all reviews