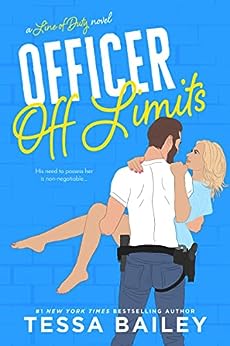 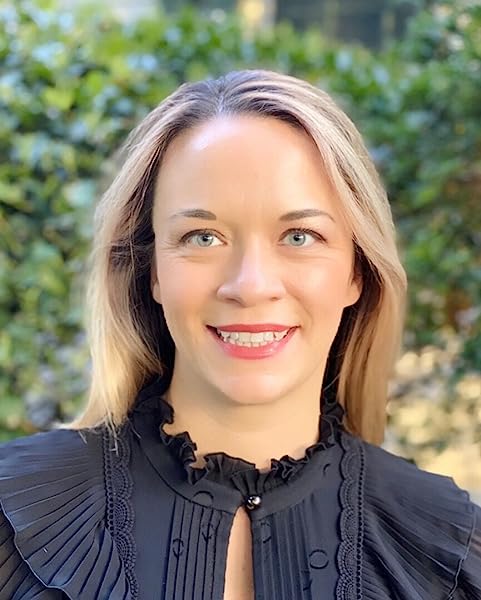 Officer Off Limits (A Line of Duty Book 3) Kindle Edition

by Tessa Bailey (Author) Format: Kindle Edition
Book 3 of 5: A Line of Duty
See all formats and editions
Sorry, there was a problem loading this page. Try again.

Story Brooks' fiancé just called off their wedding two weeks before the happy day. As if that isn't bad enough, her semi-estranged father, an infamous NYPD hostage negotiator, just suffered a heart attack. Not wanting to examine her lack of emotion over the broken engagement, she hops on a plane to reconnect with her father before it's too late.

Playboy hostage negotiator Daniel Chase has never—not once—been refused by a woman. So when a debate over hospital snack foods with a delectable kindergarten teacher ends in flat-out rejection, he makes it his mission to seduce her. His only obstacle? She's the daughter of his mentor, who implicitly forbade Daniel from pursuing her.

Despite her father's warnings and Daniel's troubled past, Daniel and Story can't resist their intense attraction to one another. But when the reason for her fiancé's abrupt wedding cancellation comes to light, can Story and Daniel's already forbidden relationship survive?

Tessa Bailey is the New York Times bestselling author of the Line of Duty series, the Made in Jersey series, and the Romancing the Clarksons novels, among other books. Tessa lives in Long Island, New York, with her husband and young daughter.

Alice Chapman comes from a literary family and surrounds herself with dreamers and creative types. She loves romance, excitement, and surprises. Alice lives in the South. --This text refers to an out of print or unavailable edition of this title.

New York Times Bestselling author Tessa Bailey can solve all problems except for her own, so she focuses those efforts on stubborn, fictional blue collar men and loyal, lovable heroines. She lives on Long Island avoiding the sun and social interactions, then wonders why no one has called. Dubbed the “Michelangelo of dirty talk,” by Entertainment Weekly, Tessa writes with spice, spirit, swoon and a guaranteed happily ever after. Catch her on TikTok at @authortessabailey or check out tessabailey.com for a complete list of books.

4.3 out of 5 stars
4.3 out of 5
863 global ratings
How are ratings calculated?
To calculate the overall star rating and percentage breakdown by star, we don’t use a simple average. Instead, our system considers things like how recent a review is and if the reviewer bought the item on Amazon. It also analyzes reviews to verify trustworthiness.

Sandy S.
4.0 out of 5 stars Another great LINE OF DUTY installment
Reviewed in Canada 🇨🇦 on June 11, 2013
OFFICER OFF LIMITS is the third storyline in Tessa Bailey's contemporary romance LINE OF DUTY series. Each novel (so far) is a stand-alone so there is no worry about cohesion and connection. This is Story and Daniel's tale.

Story and Daniel's meeting is both accidental and fate. From opposite ends of the country, the couple will be pulled into a sensual vortex of want and need from their first meeting. Story, needing time to adjust to her fiance's final words, heads to New York to visit her ailing father. Never expecting to meet someone so soon, Story is sexually aware of her attraction and desire for her father's protégé and fellow hostage negotiator Daniel Chase.

There is some back story to Daniel's life that is slowly revealed over the course of the book. We learn that although Story's life was never perfect being raised by a single parent, Daniel's early life was much more traumatic and dangerous making him the man and officer he is today.

OFFICER OFF LIMITS is another interesting and fascinating storyline with a little humor and plenty of steam in the bedroom-or stairwell-or backseat-or--well, you get the picture. There are a few moments of suspense as a small secondary story builds throughout the novel and comes to fruition in the final pages of the book, but overall it is a story about two people mutually attracted to one another, who give it their all knowing that at anytime it could all end with a phone call or the discovery of their ill-timed relationship. If you love a contemporary romance storyline where the sex scenes are passionate and hawt; the relationship is adult without the angst of perceived betrayal; and the ability of the author to pull you in until you become one with the characters then OFFICER OFF LIMITS is right for you.

READING ORDER:
1. Protecting What's His
2. His Risk To Take
3. Officer Off Limits

see all of my reviews at : thereadingcafe(dot)com
Read more
One person found this helpful
Helpful
Report abuse
See all reviews

➳ Raj
5.0 out of 5 stars Expertly Seduced by One Sexy Cop!
Reviewed in the United Kingdom 🇬🇧 on September 12, 2014
Verified Purchase
Officer off Limits had me fall in love with Tessa Bailey’s work. This was my first read and holy hell where have I been!? Tessa Bailey’s flare in writing scorching hot romance with hot possessive alpha males, left me so smitten and seduced that I didn’t hesitate in purchasing her other Line of Duty books. We follow Story whose fiancé has broken off their engagement two weeks prior to their up-coming wedding, declaring his love for another woman as the reason for their break up, leading Story to confirm her real feelings for him and address her desires in life. I loved Story’s wit as she handled Fisher’s news, she made me proud as she held her head high and glowed in self-respect. Hearing news of her estranged father suffering from a heart attack led Story to New York, where she planned to make up for lost time and switch off from her emotions. I loved the sexual attraction that sizzled as soon as Story and Daniel locked eyes for the first time, and how she ignited the primal need instantly within Daniel to crazily possess her, but finding himself in uncharted territory as his playboy charm failed. The passion between Story and Daniel was hot and heavy, as Daniel heated the pages using his expert cop negotiating skills and got down and dirty with his girl, creating many blushing moments throughout this read. The storyline was beautiful as it flowed in romance, relationship issues, emotions, passion, hilarious guy banter, and hidden danger as the playboy found himself unable to negotiate his feelings for his mentor’s daughter!
Read more
Report abuse

Nicola_1202
5.0 out of 5 stars A Cop who should be illegal he is that hot!
Reviewed in the United Kingdom 🇬🇧 on June 11, 2013
Verified Purchase
If you thought Derek and Troy were hot in the previous Line of Duty books, you will be blown away by Daniel. This Cop has a way with words and possesses moves that should be illegal.

Tessa Bailey has nailed it and this for me was the even better than its predecessors (and they themselves were fabulous). It has a great-storyline, wonderful endearing characters, humour, wit, romance, action, pain and heart-fluttering, page-burning, passionate sexy-time.

With a playboy reputation, Hostage Negotiator Daniel Chase drips sexy. He's bossy, thoughtful and protective but he's also insecure and vulnerable. Story is his boss' daughter; a teacher, she's bright, funny, has a heart of gold and is strong-willed. Visiting her Dad after his heart-attack, she meets Daniel who has been given orders by his boss not to touch his daughter. Clearly one should always obey ones superior...

Tessa knows how to give us characters with whom you become totally invested in and fall completely in love with. Daniel and Story were no different. Touching, romantic moments were combined with passion, intensity and action, Daniel's vulnerable side made my heart ache and the banter between the boys had me laughing rather loudly. With some surprises towards the end it truly was a book that captivated me and I can't wait to find out whose story we will be treated to next (I'm hoping Brent).

Needless to say, it deserves every star and I definitely recommend.
Read more
Report abuse

Lisa Benn
4.0 out of 5 stars Another Steamy Hot Romance From Author!
Reviewed in the United Kingdom 🇬🇧 on June 14, 2013
Verified Purchase
This is the third in the series by Tessa Bailey and again another Cracking, Super Hot read.

Story Brokes finds herself in New York, her father Jack Brokes NYPD hostage negotiator ends up in hospital after suffering a heart attack.

Her troubles couldn't get any worse as her fiance had also just called off their wedding two weeks before the happy day.

Whilst at the hospital Story meets Sexy Hot Daniel Chase who turns out to be her fathers protege and fellow hostage negotiator.

It may be short, but this book is crammed full of everything that I love in a steamy sexy read.
Read more
2 people found this helpful
Report abuse

Kindle Customer
4.0 out of 5 stars Oficer off Limits (A line of duty novel) by Tessa Bailey.
Reviewed in the United Kingdom 🇬🇧 on March 26, 2014
Verified Purchase
This is book 2 of 5 in the series. Each officer has a tough job to do and work in a special unit.. so they work hard and play even harder..... They all seem to be Doms and like their women as submissives, although Troy (bk 1) and Brent (bk 3) seem to be more flexible.... None of the officers previous lives have been easy, which makes them the men they become, so they have to work hard to over come their hang ups, not saying that their women are guilt free. Makes for interesting reading. I enjoyed this series.
Read more
Report abuse

Mrs B's Books
5.0 out of 5 stars Swoon!!
Reviewed in the United Kingdom 🇬🇧 on June 27, 2013
Verified Purchase
Another fantastic read from Tessa Bailey.

The flaws in her characters really bring them alive and make them that much more realistic.

Tessa knows how to make you swoon over the alpha males, leaving you with yet another wanted book boyfriend.

It story is fast paced, but not so fast you can't keep up and I really hope there will be another book in the series.