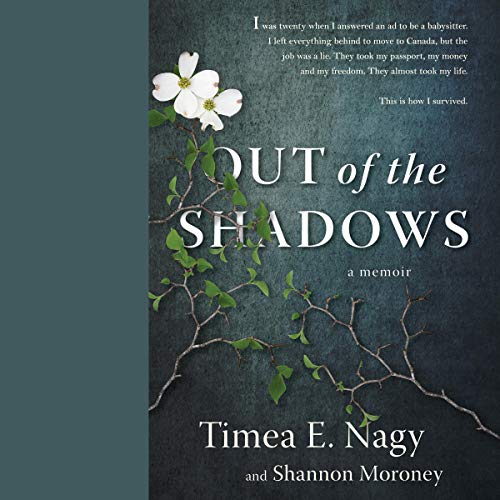 Out of the Shadows: A Memoir

An unforgettable story of an ordinary woman in astonishing circumstances who defies the odds.

Timea Nagy was 20 years old when she answered a newspaper ad in Budapest, Hungary, calling for young women to work as babysitters and housekeepers in Canada. Hired by what seemed like a legitimate recruitment agency, Timea left her home believing she would earn good money to send back to her family. What she didn't know was that she'd been lured by a ring of international human traffickers - and her life would never again be the same.

Upon her arrival in Toronto, she was forced into sex labour in some of the city's seediest nightclubs, starved and controlled by her agents, and brainwashed to believe she was to blame for her situation. The only way she'd be free was when her debt was paid - but, no matter how hard she worked, that debt seemed only to go up, not down.

Out of the Shadows is a gripping, heartbreaking, and eye-opening journey deep into the underworld of human trafficking and the sex trade, told in riveting detail by one brave survivor. At once tragic and powerfully redemptive, Timea Nagy's story will stay with you long after you've heard the last moments.

Get 3 months of Audible for only $5.95/mo!
You get 3 credits and unlimited access to podcasts, originals and more.
Limited time offer! Get started
Learn more about membership
List Price: $33.25
You Save: $4.16 (13%)
By completing your purchase, you agree to Audible's Conditions Of Use and Amazon's Privacy Notice. Tax where applicable.
Sold and delivered by Audible, an Amazon company

4.8 out of 5 stars
4.8 out of 5
172 global ratings
How are ratings calculated?
To calculate the overall star rating and percentage breakdown by star, we don’t use a simple average. Instead, our system considers things like how recent a review is and if the reviewer bought the item on Amazon. It also analyzes reviews to verify trustworthiness.

Anne Leier
4.0 out of 5 stars Shocking true story.
Reviewed in Canada 🇨🇦 on December 2, 2022
Verified Purchase
A very good read and amazing to me how this can happen in a country such as Canada. There is a lot of evil but I feel enlightened and look at things a little differently when I think about human sex trafficking. I am glad I read it and I’m awed at this women and the good work she is doing for others in her position.
Read more
Helpful
Report abuse

Myrna Pierce
5.0 out of 5 stars What a unbelievable story
Reviewed in Canada 🇨🇦 on November 19, 2022
Verified Purchase
I loved this book , very well written. I cannot imagine what this poor woman went threw but she is and was then so amazing. Her strength is inspiring .
Read more
Helpful
Report abuse

Madeline
4.0 out of 5 stars Very shocking true story!
Reviewed in Canada 🇨🇦 on September 12, 2020
Verified Purchase
The book could have been edited more..some parts were unncessarily long and I found myself skipping chapters that seemed a bit self-indulgent. Saying that, I feel this is an important book. It puts a human face on the women who society paints with the same brush and it also shows that people have a loooong way to go in raising their sons. If Canadian men — and men all over the world— were raised to respect women more, there would not be a market for “exotic” dancers and prostitutes.
Read more
One person found this helpful
Helpful
Report abuse

Tiff De Jong
5.0 out of 5 stars 10 Stars! Exception book, possibly my favourite book/memoir..
Reviewed in Canada 🇨🇦 on February 12, 2021
Verified Purchase
Perhaps my favourite book of all time, as a lover of memoirs. This book is written with such brutal honesty, and so much detail I can picture everything she is experiencing. After everything Timea endured, she writes with no pity for herself or the unfortunate situations she found herself in. Highly recommend to anyone, especially lovers of memoirs like myself. I'd give it 10 stars if I could!
Read more
One person found this helpful
Helpful
Report abuse

owl
5.0 out of 5 stars A must read
Reviewed in Canada 🇨🇦 on January 16, 2022
Verified Purchase
Fantastic true story of strength for what she lived and survived!
Read more
Helpful
Report abuse

Ryan
5.0 out of 5 stars Survival and Grit through the toughest challenges
Reviewed in Canada 🇨🇦 on February 8, 2021
Verified Purchase
Timea has endured and experienced the worst of which the world has to offer. This memoir brings us on that journey to educate and to learn about human trafficking and resilience it takes to escape. And all the move of parts on how we can participate in Stopping these horrible crimes.
Read more
Helpful
Report abuse

none
5.0 out of 5 stars Amazing memoir
Reviewed in Canada 🇨🇦 on September 23, 2019
Verified Purchase
This memoir really opened my eyes to the evil humans are capable of, but also to the resilience and courage of this woman and all the good people who helped her. She is truly inspirational. It would have been easier for her to retreat into private to rebuild her life but she has chosen to relive her nightmare every time she helps another victim. It is a testimony to the love and strength of the human spirit.
Read more
2 people found this helpful
Helpful
Report abuse
See all reviews

Miss Carrie Ann
5.0 out of 5 stars Eye opening
Reviewed in the United States 🇺🇸 on November 2, 2019
Verified Purchase
My friend recommended this book. I had a really hard time putting it down. Be prepared, it will alter the way you think about sex trafficking. Your eyes will be opened; your heart will break.
Read more
One person found this helpful
Report abuse

Debbie Gutch
5.0 out of 5 stars Super book
Reviewed in the United States 🇺🇸 on August 9, 2019
Verified Purchase
Great read and well worth it!
Read more
One person found this helpful
Report abuse

Danielle R. Prior
5.0 out of 5 stars Beautiful story
Reviewed in the United States 🇺🇸 on July 15, 2019
Verified Purchase
Touching story and powerful message this is a great read
Read more
One person found this helpful
Report abuse
See all reviews