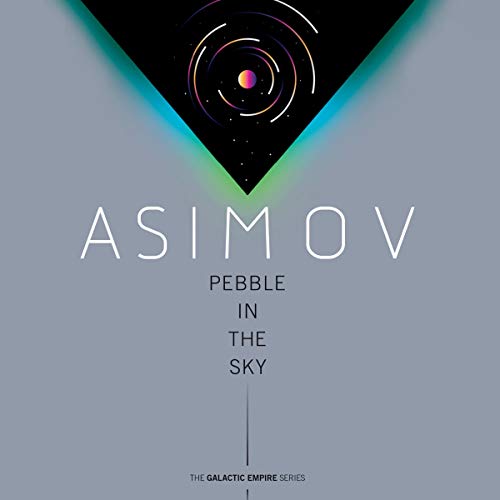 The third and final book in the Galactic Empire series, the spectacular precursor to the classic Foundation series, by one of history’s most influential writers of science fiction, Isaac Asimov

After years of bitter struggle, Trantor had at last completed its work - its Galactic Empire ruled all 200 million planets of the Galaxy...all but one. On a backward planet called Earth were those who nurtured bitter dreams of a mythical, half-remembered past when the planet was humanity’s only home. The other worlds despised it or merely patronized it - until a man from the past miraculously stepped through a time fault that spanned a millennium, living proof of Earth’s most preposterous claims.

Joseph Schwartz was a happily retired Chicago tailor circa 1949. Trapped in an incredible future he could barely comprehend, the unlikely time traveler would soon become a pawn in a desperate conspiracy to bring down the Empire in a twist of agony and death - a mad plan to restore Earth’s tarnished glory by ending human life on every other world.

Read more
©1950 Isaac Asimov (P)2020 Random House Audio
Previous page
Next page
Learn more about membership
List Price: $35.09
You Save: $4.39 (13%)
By completing your purchase, you agree to Audible's Conditions Of Use and Amazon's Privacy Notice. Tax where applicable.
Sold and delivered by Audible, an Amazon company
Share

4.6 out of 5 stars
4.6 out of 5
463 global ratings
How are ratings calculated?
To calculate the overall star rating and percentage breakdown by star, we don’t use a simple average. Instead, our system considers things like how recent a review is and if the reviewer bought the item on Amazon. It also analyzes reviews to verify trustworthiness.
Top reviews

Provost
5.0 out of 5 stars A Classic
Reviewed in Canada on January 6, 2021
Verified Purchase
Written by one of the Masters of Sci-Fi, this book, part of the Foundation Series, is excellent.
Read more
Helpful
Report abuse

Jordan
5.0 out of 5 stars Great book
Reviewed in Canada on January 6, 2013
Verified Purchase
I have read a few Asimov books lately and they are all very good I would recommend this one and all of his others.
Read more
Helpful
Report abuse

Jean-Valmond LeBlanc
5.0 out of 5 stars What a wonderful read
Reviewed in Canada on April 16, 2016
Verified Purchase
Why I chose this book. It's by Asimov, that's reason enough. He's the master. Great story and well written. I recommend this book to all.
Read more
Helpful
Report abuse

Ritesh Laud
3.0 out of 5 stars Decent Asimov but not as good as his others
Reviewed in Canada on November 16, 2001
So far I've read Asimov's four Robot novels and all three Empire novels. I haven't read the Foundation series yet. Pebble in the Sky is the last of the Empire trilogy. It's a good read but I didn't enjoy it as much as the other Empire books or the Robot series. I feel that science fiction is most enjoyable when it's somewhat believable, but Asimov nonchalantly combines three far-fetched concepts in this work: time travel, telepathy/ mind control, and a weapon of extreme mass destruction. It's a bit too much!
A man named Joseph Schwartz is for no reason warped in time to the far future when the Trantorian Empire (introduced in The Currents of Space) has conquered and brought general peace to the entire Milky Way galaxy. The novel takes place wholly on Earth but the Earth of the future is a shattered and largely radioactive planet that bears little resemblance to what it is today. There is no space travel in this book.
After the random time travel event, Schwartz proceeds to acquire superhuman powers and uncovers a conspiracy that threatens the Empire, helped by a couple people who really just end up being the supporting cast for Schwartz's show. The viewpoint of this book is interesting: the "good guys" are the vast and powerful galactic Empire and the "bad guys" are some militant activists on Earth!
Overall, this book was a letdown after The Currents of Space, my favorite of the seven Asimov novels I've read so far. Still, it gives you an interesting perspective on the Empire at the peak of its power. From what I've heard, the Foundation series is where the Empire begins to crumble. So read the Empire series if you want to get a better idea of what life in the early Trantorian regime was like!
Read more
Helpful
Report abuse
See all reviews

Mikie
5.0 out of 5 stars Dated maybe, but a classic
Reviewed in the United Kingdom on January 25, 2010
Verified Purchase
A great introduction to science fiction, by the master. Although it now slots in to the overall "universe" created by Asimov, this was originally a stand alone novel - so it stands on its own! Good story, some action, and even a little romance. A great read. Could easily be made into a movie, wonder why it never has?
Read more
One person found this helpful
Report abuse

Amazon Customer
5.0 out of 5 stars Asimov is the best
Reviewed in the United Kingdom on June 8, 2017
Verified Purchase
Excellent
Read more
Report abuse

Electronat
5.0 out of 5 stars Classic Asimov
Reviewed in the United Kingdom on July 20, 2011
Verified Purchase
I can't really fault this - or indeed any of Asimov's work. I love it all and this is no exception. A worthy addition to the science fiction section of your library.
Read more
Report abuse

s m stokes
5.0 out of 5 stars Five Stars
Reviewed in the United Kingdom on December 18, 2014
Verified Purchase
JUST AS EXPECTED
Read more
Report abuse
See all reviews
Back to top
Get to Know Us
Make Money with Us
Amazon Payment Products
Let Us Help You
EnglishChoose a language for shopping. CanadaChoose a country/region for shopping.
© 1996-2022, Amazon.com, Inc. or its affiliates