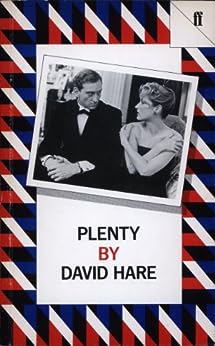 This play ran at the National Theatre, London, throughout 1978 and the New York production in the autumn of 1982 was equally well received. In counterpointing the experiences of an Englishwoman helping the French Resistance during the war with her life in the following twenty years, the author offers a unique view of postwar history, as well as making a powerful statement about changing values and the collapse of ideals embodied in a single life.

David Hare is a playwright and filmmaker. His stage plays include Plenty, Pravda (with Howard Brenton) Racing Demon, Skylight, Amy's View, Via Dolorosa, Stuff Happens, South Downs, The Absence of War and The Judas Kiss. His films for cinema and television include Wetherby, The Hours, Damage, The Reader and the Worricker trilogy: Page Eight, Turks & Caicos and Salting the Battlefield. He has written English adaptations of plays by Pirandello, Chekhov, Brecht, Schnitzler, Lorca, Gorky and Ibsen. For fifteen years he was an Associate Director of the National Theatre. --This text refers to an out of print or unavailable edition of this title.

4.1 out of 5 stars
4.1 out of 5
14 global ratings
How are ratings calculated?
To calculate the overall star rating and percentage breakdown by star, we don’t use a simple average. Instead, our system considers things like how recent a review is and if the reviewer bought the item on Amazon. It also analyzes reviews to verify trustworthiness.

Wordy
3.0 out of 5 stars A lot less than Plenty.
Reviewed in the United Kingdom 🇬🇧 on February 2, 2020
Verified Purchase
I thought I was buying a play script , with stage directions etc but the format was more like a novel with dialogue only.
Having read numerous tales of individuals suffering from ptsd I thought I knew what to expect from Plenty but found it all a lot less than convincing. Maybe it would have been more so when dramatised on stage but I just found myself scratching my head when I finished reading it. Perhaps it was me but I just didn’t ‘get it’. Disappointing.
Read more
Report abuse

Mr. J. N. Plant
5.0 out of 5 stars Hare in Performance
Reviewed in the United Kingdom 🇬🇧 on April 3, 2011
Verified Purchase
'Plenty' by David Hare was being produced at Sheffield's Crucible theatre. I have followed the career of David Hare for many years. It was a remarkable production of a play I had never seen and because it was so good I saw it again on the following Wednesday. Hare is famed for his controversial creation of female characters so on my first visit I took two women, the second time I took a different one in order, on both occasions, to discuss with them the play. Hatty Morahan played Susan Traherne , if she had been Queen Elizabeth 1 I would have followed her to the end. It made me understand for the first time the value of that Queen. Irrational, beautiful, blazing with life. Between visits I read thoroughly the text in case I had missed something
Read more
One person found this helpful
Report abuse

Calico Cat
5.0 out of 5 stars Dated but still good value
Reviewed in the United Kingdom 🇬🇧 on June 15, 2021
Verified Purchase
I bought this play because I wanted to use a monologue from it and needed to know the whole story. I enjoyed the play and it is an interesting study of trying to fit into a peacetime lifestyle after taking part in a war.
Read more
Report abuse

Gary F. Taylor
4.0 out of 5 stars Post War Disillusionment
Reviewed in the United States 🇺🇸 on October 5, 2016
Verified Purchase
David Hare’s PLENTY opened in London in 1978 and in New York in 1983. Although it is more of a critic’s darling than a popular ticket, it has received several major revivals and is perhaps most widely known as a 1985 film starring Meryl Streep. The play requires five women and eight men and is performed in twelve scenes, each requiring a full set change, over two acts.

PLENTY shifts backward and forward in time. The play begins in 1962 with a scene that finds forty-year old Susan Treherne and friend Alice Parks in an empty house with Susan’s naked and unconscious husband Raymond—a circumstance that is not explained. The next scene occurs in 1943 in France. Thereafter the scenes fall sequentially until the play’s conclusion, when the opening scene is revolved and the play suddenly shifts to 1944 and the war’s conclusion.

The play itself focuses on Susan, who was an English courier behind enemy lines in World War II France. When the war ends, Susan’s reality fails to measure up to her war time experiences. She attempts to fill the gap with bohemian friends, work, the notion of having a child, but each effort unravels until she marries Raymond Brock, a rising member of the British diplomatic corps. Even so, her dissatisfaction gradually segues into fits of insanity that have the effect of destroying her husband’s career. There is no easy answer for Susan, and the play ends on an unresolved note, leaving us to wonder how she will cope—and indeed, if she is able to.

PLENTY is a strange play, written (in the author’s description) in such a way as to present the reader with an ambiguous reaction to Susan in each of the twelve scenes. It is often difficult to like her; at the same time, it is also often difficult to blame her for her inability to adjust to the post-war world. At the same time, the plot and the dialogue spirals around itself, creating, answering, and sometimes ignoring questions and issues that arose in earlier scenes until everything seems to click into place at the play’s conclusion, where we are at last able to see Susan fully. The play is famous for its symbolic nature, with Susan’s post-war losses reflecting the post-war decline of the British Empire.

Plays are generally written to be performed, not read, and I think that is very true of PLENTY. It is difficult to imagine how the script plays on the stage. This is a script best left to those who have a knowledge of the theatre; all others should see the play in performance.