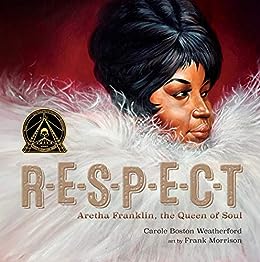 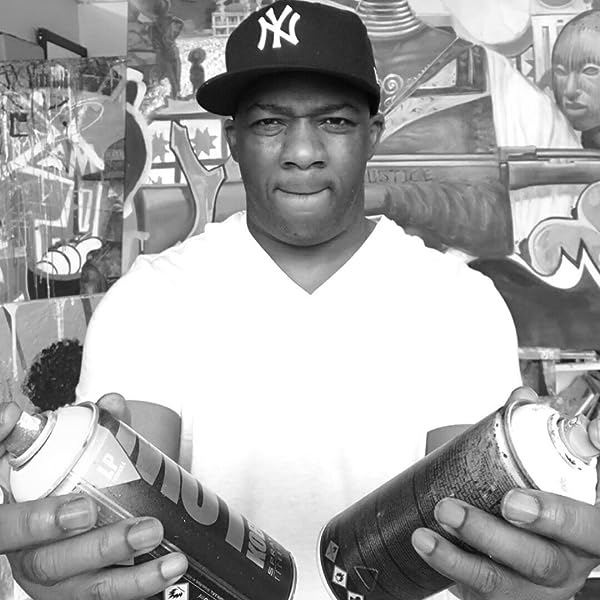 by Carole Boston Weatherford (Author), Frank Morrison (Illustrator) Format: Kindle Edition
See all formats and editions
Sorry, there was a problem loading this page. Try again.
Winner of the Coretta Scott King Illustration Award! From a New York Times bestselling author and an acclaimed illustrator comes this vibrant portrait of Aretha Franklin that pays her the R-E-S-P-E-C-T this Queen of Soul deserves.

Aretha Franklin was born to sing. The daughter of a pastor and a gospel singer, her musical talent was clear from her earliest days in her father’s Detroit church where her soaring voice spanned more than three octaves.

Her string of hit songs earned her the title “the Queen of Soul,” multiple Grammy Awards, and a place in the Rock & Roll Hall of Fame. But Aretha didn’t just raise her voice in song, she also spoke out against injustice and fought for civil rights.

* “The interplay between the deceptively simple narrative and Morrison’s illustrations is pitch-perfect. This beautiful picture book biography packs an emotional punch that is as compelling as the timeless songs that Franklin made famous.”  -- School Library Journal, STARRED Review

* "The award-winning author-illustrator team of Weatherford and Morrison have taken on the life story of the Queen of Soul, and the result is a beautiful work of art." -- Booklist, STARRED review

“Weatherford presents an overview of key moments in the notable singer’s life, particularly her contributions to the civil rights movement. Morrison’s rich illustrations use a stylized realism to depict Franklin’s trajectory from preacher’s daughter to beloved icon.” -- Publishers Weekly --This text refers to an alternate kindle_edition edition.

Carole Boston Weatherford has written many award-winning books for children, including Caldecott Honor winners Freedom in Congo Square; Voice of Freedom: Fannie Lou Hamer, Spirit of the Civil Rights Movement; and Moses: When Harriet Tubman Led Her People to Freedom. Her recent books include By and By, The Roots of Rap, Be a King, How Sweet the Sound, In Your Hands, and The Legendary Miss Lena Horne. Carole lives in North Carolina. Visit her at CBWeatherford.com.

Frank Morrison is the award-winning illustrator of many books for young readers, including Jazzy Miz Mozetta, winner of the Coretta Scott King - John Steptoe Award for New Talent; Little Melba and Her Big Trombone, a Coretta Scott King Illustrator Honor book; Muhammad Ali; and How Sweet the Sound. Before becoming a children’s book illustrator and fine artist, Morrison toured the globe as a break-dancer. He lives in Georgia with his family. --This text refers to an alternate kindle_edition edition.

4.7 out of 5 stars
4.7 out of 5
129 global ratings
How are ratings calculated?
To calculate the overall star rating and percentage breakdown by star, we don’t use a simple average. Instead, our system considers things like how recent a review is and if the reviewer bought the item on Amazon. It also analyzes reviews to verify trustworthiness.

Amazon Customer
5.0 out of 5 stars Gorgeous book celebrating the Queen of Soul!
Reviewed in the United States 🇺🇸 on March 18, 2021
Verified Purchase
My kids are OBSESSED with Aretha Franklin, so as soon as I saw this book I knew we had to get it. It does not disappoint! I love the repetitive spelling, perfect for helping kids learn their letters. The illustrations are beautiful and celebratory. Highly recommend!!
Read more
4 people found this helpful
Report abuse

agent k
5.0 out of 5 stars Lovely story and fantastic artwork
Reviewed in the United States 🇺🇸 on August 29, 2021
Verified Purchase
Read to my fourth and fifth graders then did movement activity found on MusicConstructED to go along with the book and song. There is one page that talks about Franklins dad being unfaithful. I didn’t read that page word for word. Other than that it’s a fantastic book and I bet Aretha would have loved it!
Read more
One person found this helpful
Report abuse

William Lauff
2.0 out of 5 stars Interesting drawings - Little substance.
Reviewed in the United States 🇺🇸 on April 15, 2021
Verified Purchase
Nice art, but certainly not for framing. Content would likely get a 7th grader a C+ on a report about Aretha.
Save your money.
Read more
One person found this helpful
Report abuse

Photomama
5.0 out of 5 stars Gorgeous!
Reviewed in the United States 🇺🇸 on December 9, 2022
Verified Purchase
Loved this! Gorgeous all around!
Read more
Report abuse

David Stockham
5.0 out of 5 stars Great for children
Reviewed in the United States 🇺🇸 on April 27, 2021
Verified Purchase
Purchased this as a gift. Girlfriend and her kids just love it. Easy read for all ages..
Read more
Report abuse
See all reviews
Report an issue
Does this item contain inappropriate content?
Report
Do you believe that this item violates a copyright?
Report
Does this item contain quality or formatting issues?
Report