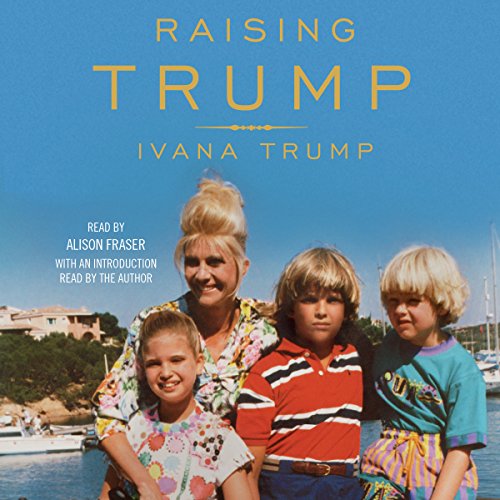 In Raising Trump, Ivana Trump reflects on her extraordinary life and the raising of her three children - Donald Jr., Eric, and Ivanka - and recounts the lessons she taught her children as they were growing up.

As her former husband takes his place as the 45th president of the United States, his children have also been thrust into the media spotlight - but it is Ivana who raised them and proudly instilled in them what she believes to be the most important life lessons: loyalty, honesty, integrity, and drive. Raising Trump is a nonpartisan, nonpolitical book about motherhood, strength, and resilience. Though Ivana writes about her childhood in communist Czechoslovakia, her escape from the regime and relocation to New York, her whirlwind romance, and her great success as a businesswoman, the focus of the book is devoted to Ivana's raising of her children. Donald Trump Jr., Eric Trump, and Ivanka Trump will all contribute their own memories to the book.

"Every day, people ask me how I raised such great kids. They are truly amazed when I tell them that there was no magic to their upbringing. I was a tough and loving mother who taught them the value of a dollar, not to lie, cheat, or steal, respect for others, and other life lessons that I'll share now in Raising Trump, along with unfiltered personal stories about Don, Eric, and Ivanka from their early childhood to becoming the first sons and daughter." (Ivana Trump)

Read more
©2017 Ivana Trump (P)2017 Simon & Schuster Audio
Previous page
Next page
Learn more about membership
List Price: $27.77
You Save: $3.47 (12%)
By completing your purchase, you agree to Audible's Conditions Of Use and Amazon's Privacy Notice. Tax where applicable.
Sold and delivered by Audible, an Amazon company
Share

4.3 out of 5 stars
4.3 out of 5
229 global ratings
How are ratings calculated?
To calculate the overall star rating and percentage breakdown by star, we don’t use a simple average. Instead, our system considers things like how recent a review is and if the reviewer bought the item on Amazon. It also analyzes reviews to verify trustworthiness.
Top reviews

Amazon Customer
1.0 out of 5 stars NOT WORTH THE POSTAGE!
Reviewed in Canada on August 21, 2018
Verified Purchase
A TOTAL WASTE OF MONEY! PROBABLY EDITED BY DONALD HIMSELF. IT DID SHOW THOUGH THAT IVANA AND DONALD REALLY WERE MADE FOR EACH OTHER AND SHOULD HAVE STAYED TOGETHER!
IF I COULD HAVE SAID NO STARS, I WOULD HAVE!!
Read more
One person found this helpful
Helpful
Report abuse

Horsefly John
4.0 out of 5 stars I knew she must have raised the kids!
Reviewed in Canada on November 3, 2017
Verified Purchase
Sorry I didn't read it, my wife read it she thought it was very good
Read more
3 people found this helpful
Helpful
Report abuse
See all reviews

Etelina
5.0 out of 5 stars Enjoyable & interesting reading
Reviewed in the United Kingdom on July 23, 2019
Verified Purchase
Really enjoyed this book! Couldn't stop reading it. It reveals a lot about the upbringing of Donald Trump's sons and daughters and behind the scene events in their lives. I love the way Ivana writes about the people, places and events in her own life. A very interesting and rewarding life indeed! It made me laugh sometimes and I realised how much, as a mother, I had in common with Ivana Trump!
Read more
One person found this helpful
Report abuse

Gail Slaven
1.0 out of 5 stars Disappointing
Reviewed in the United States on March 10, 2019
Verified Purchase
I suppose I should have known better. I have to admit I haven't finished this book because I can't stomach reading anymore. In fact, even trying to read the introduction was difficult. Ivana gushes about how perfect her children are and how she raised them perfectly and how Donald is a perfect father. The whole book is self promotion and in my opinion not worth the paper it's printed on.
Read more
61 people found this helpful
Report abuse
See all reviews
Back to top
Get to Know Us
Make Money with Us
Amazon Payment Products
Let Us Help You
EnglishChoose a language for shopping. CanadaChoose a country/region for shopping.
© 1996-2022, Amazon.com, Inc. or its affiliates