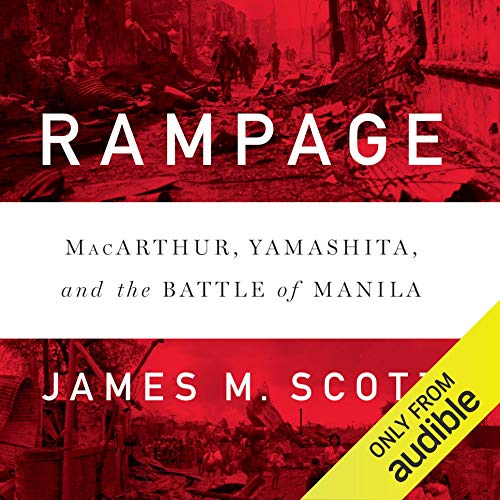 Rampage: MacArthur, Yamashita, and the Battle of Manila

The definitive history of one of the most brutal campaigns of the war in the Pacific.

Before World War II, Manila was a slice of America in Asia, populated with elegant neoclassical buildings, spacious parks, and home to thousands of US servicemen and business executives who enjoyed the relaxed pace of the tropics. The outbreak of the war, however, brought an end to the good life. General Douglas MacArthur, hoping to protect the Pearl of the Orient, declared the Philippine capital an open city and evacuated his forces. The Japanese seized Manila on January 2, 1942, rounding up and interning thousands of Americans.

MacArthur, who escaped soon after to Australia, famously vowed to return. For nearly three years, he clawed his way north, obsessed with redeeming his promise and turning his earlier defeat into victory. By early 1945, he prepared to liberate Manila, a city whose residents by then faced widespread starvation. Convinced the Japanese would abandon the city as he did, MacArthur planned a victory parade down Dewey Boulevard. But the enemy had other plans. Determined to fight to the death, Japanese marines barricaded intersections, converted buildings into fortresses, and booby-trapped stores, graveyards, and even dead bodies.

The 29-day battle to liberate Manila resulted in the catastrophic destruction of the city and a rampage by Japanese forces that brutalized the civilian population. Landmarks were demolished, houses were torched, suspected resistance fighters were tortured and killed, countless women were raped, and their husbands and children were murdered. American troops had no choice but to battle the enemy, floor by floor and even room by room, through schools, hospitals, and even sports stadiums. In the end, an estimated 100,000 civilians lost their lives in a massacre as heinous as the Rape of Nanking.

Based on extensive research in the United States and the Philippines, including war-crimes testimony, after-action reports, and survivor interviews, Rampage recounts one of the most heartbreaking chapters of Pacific War history.

PLEASE NOTE: When you purchase this title, the accompanying PDF will be available in your Audible Library along with the audio.

Our best offer yet
Get 3 months free!
Limited time offer. Get started
Learn more about membership
List Price: $50.07
You Save: $6.26 (13%)
By completing your purchase, you agree to Audible's Conditions Of Use and Amazon's Privacy Notice. Tax where applicable.
Sold and delivered by Audible, an Amazon company
Share

4.6 out of 5 stars
4.6 out of 5
272 global ratings
How are ratings calculated?
To calculate the overall star rating and percentage breakdown by star, we don’t use a simple average. Instead, our system considers things like how recent a review is and if the reviewer bought the item on Amazon. It also analyzes reviews to verify trustworthiness.
Top reviews

BRIAN G KERSWILL
2.0 out of 5 stars Don’t read this if you
Reviewed in Canada on May 2, 2019
I’m not sure that can even finish this book. The author has taken it upon himself to tell every horrible Japanese atrocity in graphic detail. The author can never just say “atrocities were repeated”, he must spend many pages in excruciating, gory detail. I don’t understand his goal. How could he be giving testimony to the victims by continuously describing the horrendous circumstances of their death. This is not a testament to the dead. It is a serial yoyeurism of brutality.
Read more
Helpful
Report abuse
See all reviews

Mr. Alan R. Jenkins
5.0 out of 5 stars Rarely heard of Japanese war Crime
Reviewed in the United Kingdom on January 30, 2019
Verified Purchase
The Rape of Nanking and Singapore atrocities are well known in regard to WWII war crimes in the Far East Theatre, but Manila in the Philippines was an equally if not more brutal occurrence. A little over three weeks saw the reinvasion of Luzon near Manila by McArthur and the capture of the once "Pearl of the Pacific" city; but the cost in lives of men, women and children of not only Filipinos and Americans, but French, Spanish, German, Netherlands and China; and including Doctors, nurses, priests and new-borns was more than 100,000. The horror of witness statements of the events that contributed to the eventual war crime tribunal for General Yamashita are detailed in as chronological order as possible; and where specific it outlines many of the most heinous criminal acts against humanity ever recorded. Excellently written and compiled.
Read more
3 people found this helpful
Report abuse

I bought my dad this for Christmas and he loved it.
Read more
Report abuse

amazon customer
5.0 out of 5 stars A stunning accomplishment
Reviewed in the United States on November 7, 2018
Verified Purchase
The author calls the dash to Manila to save the lives of prisoners held at Santo Tomas and Bilibid "...one of the most daring missions of the Pacific War.."

My father was one of the 800 troopers who slipped into Manila and rescued the prisoners at Santo Tomas in February of 1945. Before he passed away, I managed to persuade him to talk about his experiences during the dash to Manila, going through the front gate of the prison, and later, fighting in the battle of Manila. He was wounded twice.

​Even when talking with him about ​the Cavalry's rescue of the prisoners held at ​Santo Tomas​, and even knowing that he had been ​h​it in the collar bone by Jap shrapnel in the prison,​ (one inch to the left, and it would have killed him), and later during the battle of Manila he was wounded when a hand grenade exploded spewing shrapnel into his face,​ I had NO idea that the bombardment of the prison was so heavy ​and lethal and that the battle itself was so horrible ​until reading this book. The rescue truly was a daring operation. ​ Why Spielberg or Eastwood or Gibson do not make a film of this, I have no idea.

People who had survived over 3 years of abuse, starvation, executions of friends are killed while holding hands in the main building. I saw the pock marks on the building when I was there in 2010. One cavalryman came into the main building holding a bundle wrapped in a poncho​. He was dazed like in a trance. He went up to one of the doctors and asked "What should I do with this?" The doctor unwrapped the bundle. It was the upper torso of the cavalryman's best friend.

In New Guinea, in the Admiralty Islands, on Leyte, and then in Manila, my father saw the results of many Japanese atrocities, day in and day out. He only spoke of one such horror and refused to revisit so many others. This book lays such horrors out in detail and those details will rob most people of sleep. Reading Rampage, I understand my father so much better now.
​Anyone with a feeling for the Philippines or interested in the Pacific War should read this book.​
Read more
67 people found this helpful
Report abuse

Texastential
5.0 out of 5 stars More Horror Than Stephen King Could Imagine On His Worst Night.
Reviewed in the United States on November 4, 2018
Verified Purchase
This is an important book to read about a major WWII battle that has been largely ignored. The author doesn't spare the reader the details of the horrid and bestial war crimes committed. If you are a sensitive person, this book may be too much for you. I had to put it aside several times and found myself weeping more than once. It was a story that should have been told a long time ago. The account of Yamashita's war crimes trial was very interesting. I had no idea it was so controversial.

This is well worth reading for anyone interested in WWII history or war crimes.
Read more
27 people found this helpful
Report abuse

J. Groen
5.0 out of 5 stars The Horror and Tragedy of War
Reviewed in the United States on November 10, 2018
Verified Purchase
This book covers the Battle of Manila in February, 1945 in four parts. The first part provides background for the battle. The second part provides the atrocities that the Japanese military committed on the Philippine people. The third covers the battle to capture the city by the US military. And, the fourth part covers the trial of Yamashita, the general who was in charge of the Philippines when the Japanese military committed the war crimes in part II.

The most tragic part of the book is the telling of the atrocities that the Japanese performed on the Philippine people in part II. They murdered thousands of people through beheading with swords, bayoneting, shooting and burning alive. Unarmed civilian males, women, and even children as young as months old (and even the wombs) were murdered by the Japanese. I won't go into the details of the murders committed by these barbarian animals because it disgusts me even to think that it happened. Furthered, the destroyed downtown Manila through bombs, mines and fire. At one point, a civilian exclaimed "burn down Tokyo"! (That would start on March 9th and continue through the end of the war with the atomic bombs on Hiroshima and Nagasaki.)

When you read these barbaric atrocities, you can understand why some of our grandparents had such anger and even hatred of the Japanese.

If you want to read of a part of World War II that has not been covered enough, and if you can handle the detailed descriptions of the murders of the Philippine citizens in Manila in February, 1945, I highly recommend this book.

Books like these are very important to document the horror and tragedy of war so that hopefully, we will learn from our past and not do this again.
Read more
21 people found this helpful
Report abuse
See all reviews