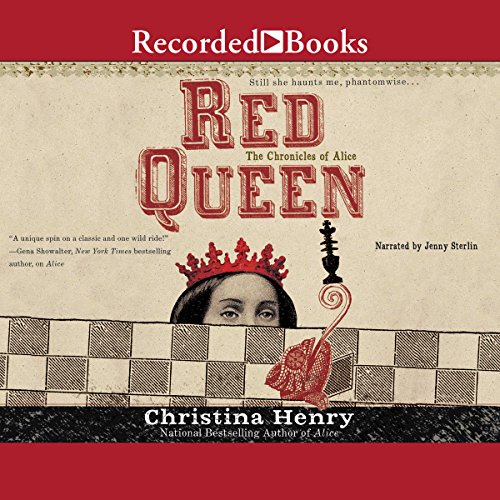 The author of Alice takes listeners back down the rabbit hole to a dark, twisted, and fascinating world based on the works of Lewis Carroll.

The land outside of the Old City was supposed to be green, lush, hopeful. A place where Alice could finally rest, no longer the plaything of the Rabbit, the pawn of Cheshire, or the prey of the Jabberwocky. But the verdant fields are nothing but ash - and hope is nowhere to be found.

Still, Alice and Hatcher are on a mission to find his daughter, a quest they will not forsake even as it takes them deep into the clutches of the mad White Queen and her goblin or into the realm of the twisted and cruel Black King. The pieces are set, and the game has already begun. Each move brings Alice closer to her destiny. But to win she will need to harness her newfound abilities and ally herself with someone even more powerful - the mysterious and vengeful Red Queen.

Read more
©2016 Tina Raffaele (P)2016 Recorded Books
Previous page
Next page
Learn more about membership
List Price: $32.41
You Save: $4.05 (12%)
By completing your purchase, you agree to Audible's Conditions Of Use and Amazon's Privacy Notice. Tax where applicable.
Sold and delivered by Audible, an Amazon company

4.7 out of 5 stars
4.7 out of 5
532 global ratings
How are ratings calculated?
To calculate the overall star rating and percentage breakdown by star, we don’t use a simple average. Instead, our system considers things like how recent a review is and if the reviewer bought the item on Amazon. It also analyzes reviews to verify trustworthiness.
Top reviews

Amazon Customer
5.0 out of 5 stars Red Queen by Christina Henry
Reviewed in Canada on October 25, 2019
Verified Purchase
I wish this was a hardback because I love these books so much. Otherwise I have nothing but good things to say.
Read more
Helpful
Report abuse

Bee-Me
4.0 out of 5 stars Short and fun
Reviewed in Canada on September 28, 2020
Verified Purchase
I really wish this could be a longer series, the reading is fun and takes interesting turns. I recommend this book
Read more
Helpful
Report abuse

Amazon Customer
3.0 out of 5 stars Too much of the same, over and over again.
Reviewed in Canada on January 15, 2017
After reading Alice I was hooked on the series and was excited to get my hands on the second instalment. I was however, quite disappointed with this novel. The plot was interesting and fit very well into the world Henry created for her Alice characters; my issue lies with the writing rather than the plot elements. Henry wrote as if she had to fit in every single thought she had for the story regardless of whether the thoughts fit into the story. There is an abundance of asides that Henry writes as Alice's ongoing internal monologue but she wrote so many on the same topics ie. The Jabberwocky, Cheshire, The Rabbit, The Walrus, the kidnapped women, and her own experience in the first novel - that it became tedious to read them all. I found myself shouting at the book "I get it - stop going on about it" in reference to Alice's non-stop reference to Cheshire being banished, or so she thought, from her mind. So much of what Henry wrote was redundant and I became quite frustrated with reading the same thoughts (only with different similes and metaphors) over and over again that honestly, the novel was a rather uninspiring read.
The plot was very good and had Henry vetted a little bit more of her writing and cut some of the repetition I do believe the novel could have succeeded.
Read more
One person found this helpful
Helpful
Report abuse

Dman
2.0 out of 5 stars Disappointing
Reviewed in Canada on December 22, 2017
I loved the first book, Alice. This sequel was a major letdown.
Read more
Helpful
Report abuse
See all reviews

Kate P
5.0 out of 5 stars Book looks pretty much like brand new
Reviewed in the United Kingdom on September 10, 2016
Verified Purchase
Book looks pretty much like brand new!
I'm really happy to get cover that matches 1st part as it is printed with different cover in UK now. So now it's on the shelf waiting for me to finish my current read
Read more

Miranda Good
2.0 out of 5 stars A Disappointment
Reviewed in the United States on April 21, 2017
Verified Purchase
I thoroughly enjoyed author Henry's first book in this series which reimagines the fabulous Alice's Adventures in Wonderland. I thought her attempt to do so was both original and most satisfying, as she manages to integrate Lewis Carroll's characters into an entirely new setting while maintaining Alice's persnickety personality and the phantasmagorical tone of the original. I gobbled down "Alice" with the same relish as Alice herself approaches a tea tray of iced cakes. Based on her thoroughly successful and entertaining first recreation, I awaited its sequel with much anticipation. Unfortunately, Henry is unable to replicate her earlier success. Red Queen somehow fails to retain the delicate balance of whimsy and horror she previously achieved. In this one, the captivating relationship between Alice and her Hatcher is lost as he is transformed into a wolf and disappears for long portions of the narrative. Also, Henry introduces a subtext which not so subtly editorializes about her theories of magic and human emotions. The humor is mostly lost, whereas the gore and suffering of the characters encountered is magnified. I grew increasingly impatient with all the tricks played on Alice by her imagination and the wickedness of the name character as she attempts to settle old scores. I thought the conclusion was both maudlin and unsatisfying. I found myself reading faster and faster, not in excitement, but in a hurry to get it over with. For those who loved Alice, I fear its sequel will be a disappointment.
Read more
22 people found this helpful
Report abuse

Anne C.
3.0 out of 5 stars A good book, but not in Alice's league...
Reviewed in the United States on May 28, 2019
Verified Purchase
I waited a long, long time to read this book and I think that may have colored my expectations a bit, but if I'm trying really hard to be objective, this is a good read. But it honestly can't compare to its predecessor, Alice.

One of the things that made Alice so compelling was the interaction of the characters, especially Hatcher and Alice. There isn't a whole lot of that going on in Red Queen, and I missed it. The new characters are interesting, but their backstories are sad and seem incomplete, somehow.

The settings are great and the language is finely honed. There isn't any wandering or excessive wordiness to the narrative. It's clean and clear and easy to follow. The plot doesn't really meander, but it's mostly centered on a long journey, which isn't my favorite.

All in all, I'd have to say that I enjoyed this book and read it almost straight through, but I felt sort of empty when I was finished. There was something lacking - some details or the chutzpah that was present in Alice or perhaps just a more satisfying ending. I'm not sure, but I just wanted more from this story.

TL;DR: Enjoyable and recommended, but lacking something of what made Alice so outrageously fantastic.
Read more
3 people found this helpful
Report abuse
See all reviews