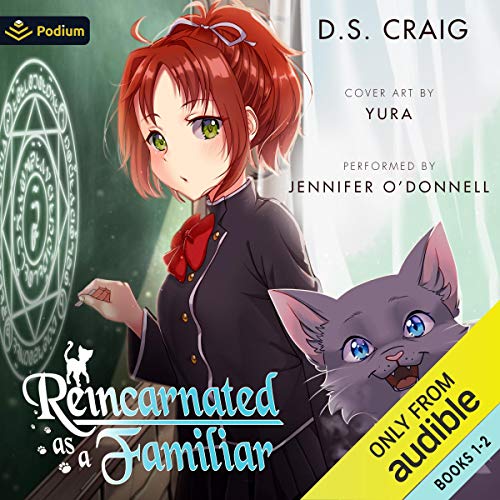 Contains volumes one and two of Reincarnated as a Familiar

A young teacher finds herself reborn with only fuzzy, damaged memories of her past life. Even worse, she's stuck in the body of a cat and can't remember her own name. Summoned by a young mage girl named Lesti, she takes up the name Astria and becomes the girl's familiar.

However, things won't be easy for her. The pair immediately find themselves in trouble over Astria's summoning. What's more, Lesti is at the bottom of her class and has almost no power of her own. On top of all that, she seeks to use Astria's potential to turn society in this new world on its head. With a new body and abilities that she doesn't understand, will Astria be able to grant Lesti's desire?

After their close call with the archdemon Thel’al, Astria and Lesti are finally given permission to leave the academy grounds. Eager to get out into the city, they head to the market. Almost immediately, they hear whispers of strange happenings in the city. Unable to ignore the problem, they begin to investigate on their own.

Meanwhile, back at the academy, Lesti finds herself in a new class. In fact, it’s the top class in her year! With a unique chance to make friends, she doesn’t waste any time. However, Astria has her concerns. The girl she befriends, Aurelia, is acting suspiciously.

Will Astria safely navigate Thel’al’s schemes and find the secret behind Aurelia’s actions, or will her curiosity spell doom for the Astral Cat?

Our best offer yet
Get 3 months free!
Limited time offer. Get started
Learn more about membership
List Price: $50.12
You Save: $6.26 (12%)
By completing your purchase, you agree to Audible's Conditions Of Use and Amazon's Privacy Notice. Tax where applicable.
Sold and delivered by Audible, an Amazon company
Share