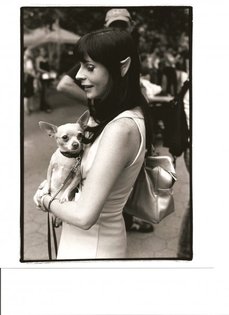 by Saint Reverend Jen (Author)
4.9 out of 5 stars 9 ratings
See all formats and editions
Sorry, there was a problem loading this page. Try again.
Printed on pink papers, Reverend Jen's Reverend Jen's Really Cool Neighborhood is a travel guide for the poor, deviant and bored, which takes readers on a whirlwind tour through the Lower East Side where they will gain valuable insight into where to obtain the cheapest Budweiser, the greasiest pizza and the fanciest porcelain unicorn heads. Filled with personal anecdotes of hellish roommates, loneliness and delusions of fame and peppered with delightful illustrations and sultry photos, it is both educational and entertaining.

Flip the book over and you'll find a bonus - Les Misrahi, an epic musical puppet show which tells the story of Jen Valjean, an ex-convict who has just been freed after serving three years for stealing a glue stick from Kinkos.

4.9 out of 5 stars
4.9 out of 5
9 global ratings
How are ratings calculated?
To calculate the overall star rating and percentage breakdown by star, we don’t use a simple average. Instead, our system considers things like how recent a review is and if the reviewer bought the item on Amazon. It also analyzes reviews to verify trustworthiness.

L. A. Ruocco
5.0 out of 5 stars Reverend Jen's Really Cool
Reviewed in Canada 🇨🇦 on April 29, 2004
Saint Reverend Jen has fostered my performance-art career when All i had was a wig, a box & a tutu. "RJ'sRCN"(--her book, printed on pink paper which makes it very easy on the eyes) begins with a map of the Lower East Side, where it all takes place, like Tolkien's Land of Morder, above Houston Street is the "rest of the world."
she references her influences, Danté (as she is your guide), & Mr. Roger's Neighborhood... as she is in her Own land of make believe... which most paranoid-delusionals may mistake as, is, in fact, Reality.is it? . . . .Her Work is a true historical documentation of NYC, & chapter 9: the 2 greatest open mikes, Faceboy's Sunday-night, & her own Wednesday "Anti-Slam." I laughed out-load as she describes 'just when she thought she'd seen it all,' she windexs the violated mike stand from unsaid male performance artist's naked spread buttocks. ...& myself being the unsaid unactual woman who painted a p.... onto canvas with her menstrual blood (p.97), & pull an onion out of her v... (p.99), i was like, me, me, me, i did that! (La Ruocco) Rehashing as i read, the day i used my fingers as a gun & said 'This is a stick up, everyone give me your wallets,' & pre-rehab took their money... 'now i need a hostage' (ref: p. 96); ... the audience, themselves a group of performance artists; we transcended. -- Jen was my icon -- for building the forum.
i especially enjoyed chapter 6, & the painting illustration, about pizza coating the walls of your stomach like "Pac-Man, which gobbles up the excess beer floating around inside me." i thought that was particularly Laruoccan.
I know that she is very well respected in the local community (which in the city, is a few million people) because i can't walk through that part of town, without people mistaking me for her, as i (sans/ wig) do bear a striking resemblance to her (sans/ elf ears). Sometimes i let them think im her, because she is so cool. {but im not her, im !plug: L a. Ruocco [author of "Xero, turn-of-the-millenia" ]!
anyways, it was good to read how she got from 'art school' to there. It's kind of a coming-of-age book. (to find more on Jen, Kim's Video rents out her movies.)(p.s. i follow my own religion: "is what it ism" Laruoccco©2OO3; yet im also a devote Reverend Jen disciple.)
Read more
Helpful
Report abuse

Urasmus B. White
5.0 out of 5 stars Astounding!
Reviewed in Canada 🇨🇦 on June 17, 2003
Reverend Jen's account of her neighborhood "fun" is both educational and entertaining, not to mention, a staggering work of genius that knocks the pretentious off their high horse with its honest aesthetic of the uncool. The political puppet show combines silly humor and scathing political satire as well as pop culture references and more laughs than a barrel full of crazed monkeys. I love Reverend Jen. Although I am not Reverend Jen. I love her. Despite the fact that Reverend Jen will probably never be recognized by the established literary / art world of her time, years from now, Reverend Jen will be recognized as an artist whose vision inspired a whole new legion of art stars.
Read more
Helpful
Report abuse
See all reviews

GP360
4.0 out of 5 stars Fun Observations About A Fun Place
Reviewed in the United States 🇺🇸 on August 22, 2003
Verified Purchase
I cringed when I read the so-called review in which the reviewer launched a personal attack on the author rather than discussing the book. That was extremely inappropriate, and the person who wrote that should be ashamed of himself or herself. Then again, another reviewer, in response to that out-of-line review, wrote something that praised the author but again did not address the book itself at all. I think some people are missing the point of a review.
Lest I too become one of those people, I'll now talk about the book: I liked it.
The Lower East Side is a fun place. As Manhattan becomes more uniformly upscale and sanitized (you *know* things are changing when even the Meatpacking District becomes fashionable), the Lower East Side is the last bastion of hipness and nonconformity. I thought "Reverend Jen's Really Cool Neighborhood" captured the feel of that very nicely. As the author says, it's quite likely that some of the places she mentioned will no longer be there by the time the reader reads the book, but that hardly matters. The value of the book is not in its usefulness as a travel guide. Rather, I think it serves as a snapshot of a certain place at a certain time - a neighborhood somewhere between the old dangerous-but-fun New York and the new safe-but-bland New York.
Read more
11 people found this helpful
Report abuse

AMG
5.0 out of 5 stars Holy Elf
Reviewed in the United States 🇺🇸 on June 22, 2006
Verified Purchase
I for one hope and pray that the Rev has got rich parents who will look after her. Pointy ears don't grow on trees, you know! And neither do troll museums. She's a gentle genius and this book will heal you. No, this doesn't mean you can stop taking your lithium or your amoxicillin (you know who you are.)
Read more
3 people found this helpful
Report abuse

Octo
5.0 out of 5 stars Love Reverend Jen
Reviewed in the United States 🇺🇸 on October 9, 2018
Verified Purchase
Great book, as are all of this author's. Loved the chapter on the glories of canned Budweiser, particularly. One of my favorite writers.
Read more
Report abuse

K.W. Kesler
5.0 out of 5 stars Add it to the shelf!
Reviewed in the United States 🇺🇸 on March 6, 2015
Verified Purchase
I adore this woman, her insight makes me happy.
Read more
Report abuse