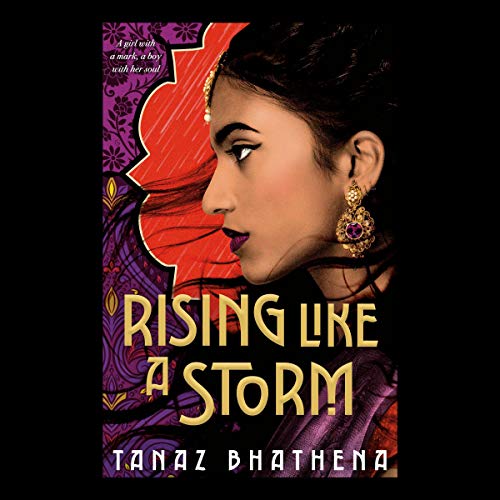 Rising Like a Storm: The Wrath of Ambar, Book 2

In the concluding installment to the Wrath of Ambar duology from masterful author Tanaz Bhathena, Gul and Cavas must unite their magical forces - and hold onto their growing romance - to save their kingdom from tyranny.

With King Lohar dead and a usurper queen in power, Gul and Cavas face a new tyrannical government that is bent on killing them both. Their roles in King Lohar's death have not gone unnoticed, and the new queen is out for blood. What she doesn't know is that Gul and Cavas have a connection that runs deeper than romance, and together, they just might have the strength and magic to end her for good.

Then a grave mistake ends with Cavas taken prisoner by the government. Gul must train an army of warriors alone. With alliances shifting and the thirst for vengeance growing, the fate of Ambar seems ever more uncertain. It will take every ounce of strength, love, and sacrifice for Gul and Cavas to reach their final goal - and build a more just world than they've ever known.

Our best offer yet
Get 3 months free!
Limited time offer. Get started
Learn more about membership
List Price: $21.04
You Save: $2.63 (13%)
By completing your purchase, you agree to Audible's Conditions Of Use and Amazon's Privacy Notice. Tax where applicable.
Sold and delivered by Audible, an Amazon company
Share

4.3 out of 5 stars
4.3 out of 5
47 global ratings
How are ratings calculated?
To calculate the overall star rating and percentage breakdown by star, we don’t use a simple average. Instead, our system considers things like how recent a review is and if the reviewer bought the item on Amazon. It also analyzes reviews to verify trustworthiness.
Top reviews

Barnali Nath
5.0 out of 5 stars Wonderful conclusion of the duology!
Reviewed in India on January 16, 2022
Verified Purchase
✨The sky has fallen, a star will rise
Ambar changed by a king's demise
A girl with a mark, a boy with her soul
Their fates intertwined, two halves of a whole
Usurpers have come, usurpers will go
The true king waits for justice to flow.✨

Rising like a storm is the second and final installment to the 'Wrath of Ambar' duology.
The story picks up about 3 months after the events in the first book, with Gul and Cavas now being hunted by the Usurper Queen, who now is known as the Ambar Sikandar!
A prophecy, usurper queen, politics, a magical battle, mythical creatures, and adventure with the perfect amount of romance, this book has everything!
The author has created a beautiful world, you can completely find yourself driven deep in it. She has such beautifully penned every scene, describing the story from Gul, Cavas, and Shyla's point of view. I can see the entire plot running in my mind! The character buildup was to the point, especially pasuraj Subodh, he gave me Aslan vibes( *Aslan from Chronicles of Narnia).

Overall I loved this read. Filled with power-packed action scenes, politics, magic, and not to forget the badass women is everything about this sequel that will leave your favorites for more! This book series has become one of my favorites and I cannot stop recommending this book to everyone!
Read more
Report abuse

Rohini Soni
5.0 out of 5 stars Perfect read
Reviewed in India on July 13, 2021
Verified Purchase
If yiu are looking for a journey which takes on magic and love. This book is so for you.
Read more
One person found this helpful
Report abuse

Ananyaa Singhal
5.0 out of 5 stars The book is amazingly written. I'm satisfied
Reviewed in India on July 2, 2021
Verified Purchase
I liked this product very much since its my favourite book , I wanted to have from a long time. And finally now I have it in my hands . I even finished reading it . It was that good ,so thanks .
Read more
Report abuse

Dr.Ishrat.
5.0 out of 5 stars Absolutely beautiful
Reviewed in India on February 14, 2022
Verified Purchase
It was make you WONDERSTRUCK
Read more
Report abuse
See all reviews