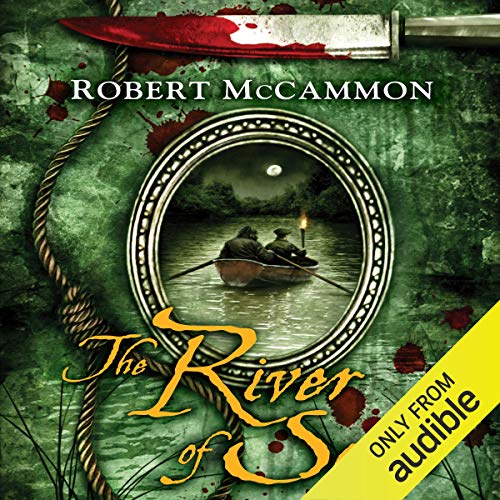 The year is 1703. The place: The Carolina settlement of Charles Town. Matthew Corbett, professional 'problem solver,' has accepted a lucrative, if unusual, commission: Escorting a beautiful woman to a fancy dress ball.

What should be a pleasant assignment takes a darker turn when Matthew becomes involved in a murder investigation. A sixteen-year-old girl has been stabbed to death on the grounds of a local plantation. The suspected killer is a slave who has escaped, with two family members, into the dubious protection of a nearby swamp. Troubled by certain discrepancies and determined to see some sort of justice done, Matthew joins the hunt for the runaway slaves. He embarks on a treacherous journey up the Solstice River, also known as the River of Souls. He discovers that something born of the swamp has joined the hunt...and is stalking the hunters with more than murder in mind.

What follows is a shattering ordeal encompassing snakes, alligators, exiled savages, mythical beasts, and ordinary human treachery. The journey up the River of Souls will test Matthew's courage, commitment, and powers of endurance. It will also lead him to a confrontation with a figure from his recent past, which will alter Matthew's life, setting the stage for the next installment in this compulsively readable series.

Gripping, unsettling, and richly atmospheric, The River of Souls is a masterful historical adventure and a major addition to Robert McCammon's extraordinary body of work. Featuring the continuing exploits of a young hero USA Today has called 'the Early American James Bond.'

4.5 out of 5 stars
4.5 out of 5
349 global ratings
How are ratings calculated?
To calculate the overall star rating and percentage breakdown by star, we don’t use a simple average. Instead, our system considers things like how recent a review is and if the reviewer bought the item on Amazon. It also analyzes reviews to verify trustworthiness.

Adele Wolfe
5.0 out of 5 stars Recommend
Reviewed in Canada 🇨🇦 on July 16, 2019
Verified Purchase
This is a great series has some great historical elements a n great suspensw
Read more
Helpful
Report abuse

Bryan
5.0 out of 5 stars historical fiction that is addictive
Reviewed in Canada 🇨🇦 on May 9, 2018
Verified Purchase
great mix of historical details and an intriguing story filled with mixture of philosophical tensions and a 'real world' pragmatism. I really hope there is more to Corbett's tales!
Read more
Helpful
Report abuse

Amazon Customer
4.0 out of 5 stars Robert Mccammon delivers.
Reviewed in Canada 🇨🇦 on July 5, 2014
Verified Purchase
Another excellent installment. Can't wait for the next one.
Read more
Helpful
Report abuse
See all reviews

Jamma
5.0 out of 5 stars Journey completed, so far
Reviewed in the United States 🇺🇸 on October 15, 2022
Verified Purchase
This book marks the completion of a journey that began with "Speaks the Nightbird" released in 2002. While subsequent books were relatively easy to track down, this one proved to be the most difficult to acquire, only being available from private booksellers in excess of $300. Yeah.
So it was good to see it on the market. The series involved the escapades of a self-professed "problem-solver" in very early 18th century America, chiefly in New York City. The books are well researched and written.
I must add that I have been a fan of this person's writing for decades.
Read more
Report abuse

Moira L. Mefein
4.0 out of 5 stars A few too many coincidences, but worth the read.
Reviewed in the United States 🇺🇸 on August 2, 2016
Verified Purchase
Before going further, let me say that I seriously dislike cliffhanger endings in books, including this one. A volume in a series can, and I think should, be complete in itself....particularly when the series has been around for a while. We have proven our loyalty as fans of the Matthew Corbett series and continue to buy the books, so there's no need to jerk us around with an unfinished yarn.

That said, the book once again drops Matthew in life-threatening circumstances that he escapes wounded and confused. The environment in this story....the river, swamp, and forest...are well drawn. Indeed, the river becomes a character, just as much as the humans. As with the earlier volumes, the evil characters are 110 percent evil, and the "good" folks are a real mix, many seeming quite eager to be carried into the ugliest of behaviors. A few new characters are well worth discovering, and will, I hope, be featured in future volumes.

Overall, the book is mostly satisfying, but relies several times on coincidences that seem far-fetched.

At the moment, I am trying to decide whether toured the next volume, as I have already been told that it, too, ends in a cliffhanger. There are so many complete tales to read that I am hesitant to start yet another designed to keep me breathlessly waiting to buy the next book.
Read more
9 people found this helpful
Report abuse

Diane Graef
5.0 out of 5 stars An entertaining journey with Matthew Corbett
Reviewed in the United States 🇺🇸 on August 29, 2018
Verified Purchase
River of Souls wasn’t my favorite of Robert McCammon’s very well told Matthew Corbett adventure series, but it was a very entertaining read. I think I would give it 4.6 stars. In River of Souls we find Matthew for the most part without his usual cohorts (Greathouse and Berry), for a trip to St. Charles to solve a little problem. It seems a beautiful self-centered damsel in distress can’t get a date to the St. Charles Sword of Damocles Ball. As usual, nothing is as it appears and we are ultimately introduced to Magnus Muldoon as co-protagonist in a story of pride, prejudice and misinterpretation of facts and evidence in a murder case Matthew is called upon to solve. Thus ensues a harrowing trip up the River of Souls in pursuit of truth. Suffice it to say – blood, guts and gore abound, whether through acts of snakes, crocodiles, phantoms or the most fearful creature of all – man. We are left hanging at the end of the story. Will Matthew get back to New York and Berry, his love? Highly recommend this book with the caveat – start at the beginning of the series and go in sequence. Otherwise, the flavor of the tale may still be quite savory, but much of the richness of the ongoing story and development of the characters will be lost.
Read more
Report abuse

Klapaucjusz
4.0 out of 5 stars Adventure in the swamps
Reviewed in the United States 🇺🇸 on November 18, 2019
Verified Purchase
This book is not as good as the first two in the series but it is still a very good adventure read. There is not much history in it but Mathew’s escapades in the swamps are very engaging. So if you are looking for a good scary adventure story with terrifying creatures and even more creepy humans, go for it. The plot creates its own atmosphere, which is something that Mr. McCommon can be a master of. Oh, and there is not much of professor Fell in it, which, for me, is a plus. Maybe this is why I liked this nr 5 book better than preceding it book nr 4. After nr 4 (“The Providence Rider”) I was ready to quit on this series. I am glad I did not.

PS. Starting from nr 3 these books need to be read in order. There are too many overlapping plots between them to be read as a “stand alone”.
Read more
Report abuse
See all reviews