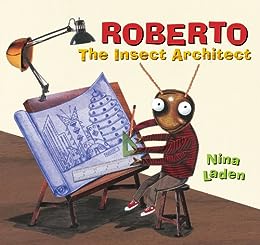 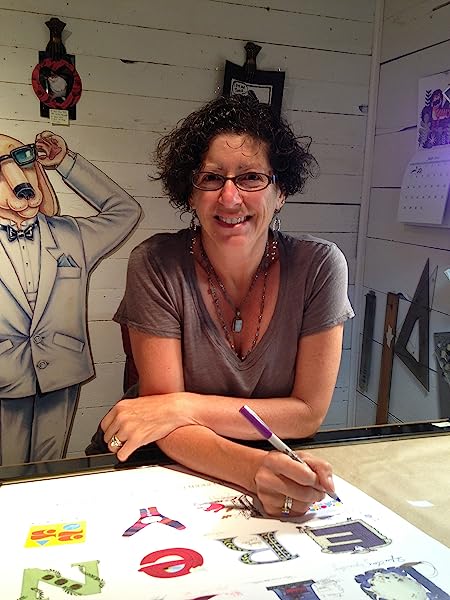 by Nina Laden (Author) Format: Kindle Edition
See all formats and editions
Sorry, there was a problem loading this page. Try again.
Ever since he was a wee mite (a termite, that is), Roberto has wanted to be an architect. Discouraged by his wood-eating family and friends, he decides to follow his dream to the big, bug city. There he meets a slew of not-so-creepy, crawly characters who spark in him the courage to build a community for them all.

With stunning collage illustrations and witty text, the creator of the bestselling The Night I Followed the Dog, Private I. Guana, and When Pigasso Met Mootisse brings to life a funny and inspirational story that will encourage readers of any age to build their dreams. Plus, this is the fixed format version, which looks nearly identical to the print version.
Read more
Previous page
Next page
Kindle e-Readers
Fire Tablets
Free Kindle Reading Apps
Available on these devices

"Even when Roberto was little, he went against the grain. Like most termites, he melted over maple, and pined for pine. Oak was okay, too. But Roberto didn't eat his food. He played with it."

Young Roberto has a burning desire to become an architect. Even when the other termites mock his ambition, Roberto is never derailed from his dream. So, like so many career-minded youth, this mite with a mission sets off for the big, buggy city. Here, sadly, he is thwarted by his heroes, Hank Floyd Mite and Fleas Van Der Rohe. But this inspired insect decides not to wallow in his sorrows but to help out other bugs with even greater problems. Soon, a fantastic, eclectic housing development is in the works. The mysterious architect chooses to remain anonymous, but ultimately can't avoid the grateful adulation of the carpenter ants, ladybugs, and house flies he has helped.

Nina Laden's fantastic collages use old catalog and magazine images, blueprints, cork veneer, and lots more, to create buildings, cities, and buggy creatures the likes of which you've never seen. The Leaning Tower of Pisa tilts away from the Empire State Building, with Gaudi's quirky sculptural edifices looming nearby. Some of the hilarious wordplay may fly over the heads of non-architects, but the overall humorous effect--and the go-for-your-goals message--will not be lost on anyone. For more charming and artistic pun-ishment, try Laden's When Pigasso Met Mootisse. (Ages 6 to 11) --Emilie Coulter --This text refers to an out of print or unavailable edition of this title.

This good-natured tale, whose striking collages incorporate wood products and city photographs, introduces a termite who "went against the grain.... Roberto didn't eat his food. He played with it." While other termites picnic on "wood chips" and shotgun shacks, Roberto yearns to build with boards. He also exhibits a philanthropic streak. His first project is a neighborhood for homeless bugs, including a fireproof stone dwelling for a ladybug whose first house, per the nursery rhyme, burned down. Laden (When Pigasso Met Mootisse) wittily imagines a termite with a social conscience, one who ensures that bedbugs have "their very own beds." She incorporates woodworking tools into her bug-themed spreads and creates furniture from carefully cropped pieces of cork and veneer. Ant-like Roberto hunches over a mahogany-brown drafting table, busily drawing blueprints for a milk-carton shelter and a conical hive with neat circular windows. Even if children don't get the gags about Hank Floyd Mite (seated at a Guggenheim-shaped desk with a sketch of Fallingwater) and Fleas Van Der Rohe, nonstop insect quips and humorous bug house illustrations keep this book buzzing along. Ages 2-6. (Oct.)
Copyright 2000 Reed Business Information, Inc. --This text refers to an out of print or unavailable edition of this title.

Gr. 2-4, younger for reading aloud. While playing with his wood-chip dinner, prodigy termite Roberto dreams of being an architect. He moves to the city, where he tries to find a job with famous designers but all reject him. Wandering home, he meets swarms of disenfranchised, homeless bugs, and he decides to build a community for them. Planning and building the entire project himself, Roberto creates a sensation even before his identity is revealed, and once the secret is out, he becomes a legend. The lively text is filled with challenging words and some fun puns, although many of them, like the hilarious Hank Floyd Mite and Fleas Van Der Rohe, will be beyond the youngest readers. It's the elaborate, whimsical collages that are exceptional here. Nearly bursting from the pages, they combine painted, drawn, and photographed images in spreads that perfectly capture the energy of the city and the creative excitement of architecture, as well as irresistibly expressive bug characters. An architectural fantasy picture book for children who dream of building. Gillian Engberg
Copyright © American Library Association. All rights reserved --This text refers to an out of print or unavailable edition of this title.

Nina Laden grew up in the New York City area. The daughter of two artists, she studied illustration at Syracuse University. She is the author and illustrator of The Night I Followed the Dog, also published by Chronicle Books. --This text refers to an out of print or unavailable edition of this title.

Nina Laden is the author and illustrator of many books for children, including Peek-a Who?, one of Scholastic Parent & Child Magazine's 100 Greatest Books for Kids; its companions Peek-a Zoo!, Peek-a Boo! and Peek-a Choo-Choo!; The Night I Followed the Dog; When Pigasso Met Mootisse; Are We There Yet?; and Once Upon a Memory, illustrated by Renata Liwska. She lives in Seattle and Lummi Island, Washington. --This text refers to an alternate kindle_edition edition.
Read more

Nina Laden is the author and illustrator of many books for children, including Peek-a Who?, one of Scholastic Parent & Child magazine's 100 Greatest Books for Kids, and Are We There Yet? She lives in Seattle, Washington.

4.8 out of 5 stars
4.8 out of 5
80 global ratings
How are ratings calculated?
To calculate the overall star rating and percentage breakdown by star, we don’t use a simple average. Instead, our system considers things like how recent a review is and if the reviewer bought the item on Amazon. It also analyzes reviews to verify trustworthiness.
Top reviews

Roslynne Levine
5.0 out of 5 stars A Terrific Little Termite!
Reviewed in Canada on March 7, 2001
From the beginning, Roberto was different. He loved his wood, but he'd always rather play with his food than eat it. More than anything he wanted to become a famous architect like his heroes, Hank Floyd Mite and Fleas Van Der Rohe. Belittled at home by the other termites and never taken seriously, Roberto sets off for the big city to "build his dreams." Life in the city is hard, and not just for Roberto. He meets all kinds of bugs with housing problems, including roaches chased from a diner, a housefly with no place to go and a poor ladybug whose house is on fire and children are gone. Marshalling all his determination, Roberto decides to build a new community, that will meet the needs of these out-of-luck bugs and maybe make his architect dreams come true at the same time..... Nina Laden has written and illustrated a delightful and amusing story with a most improbable hero and youngsters will be rooting for Roberto as he chases and finally realizes his heart's desire, in his bug eat bug world. Ms Laden's witty text, full of creative wordplay, will charm adults as well as children and her outstanding collage artwork, so full of wonderful detail, really brings this story to life. A terrific picture book for youngsters 4-8, Roberto the Insect Architect lets everyone know that with hard work, your dreams can come true.
Read more
Helpful
Report abuse

Xeneri
5.0 out of 5 stars A Howard Roark for the termite set
Reviewed in Canada on September 13, 2000
Insect architects! This is an inspired little story with theunlikely prospect of a termite who dreams of building with wood instead of eating it.... Roberto sets off for the big buggy city in search of his dream.
The story is encouraging, and the wordplay witty but it's the fantastically funky collages that win you over. Laden uses all sorts of images... to create unreal insect edifaces. You'll find yourself staring at the quirky seussian architecture and chuckling at all the in-jokes.
A treat for the eyes and very fun!

Kelley Drisko
4.0 out of 5 stars Fantastically fun and ingeniously imaginative
Reviewed in Canada on March 1, 2001
A delightful story about a termite who overcomes all opposition to become a world renowned architect. The message that you can be anything you want to be is very obvious but the unusual characters and clever word play keep the book from sounding preachy. The illustrations are an integral part of this tale and greatly enhance the overall effect. My only reservation about this book is that while the length and format are ideal for younger children, many of the plays on words that make the story so enjoyable will only be understood by an older audience.
Read more
Helpful
Report abuse

peachyqueen27
5.0 out of 5 stars My architect husband loves this book!
Reviewed in Canada on August 8, 2003
My husband just recently purchased this book. We both love it! I love the story line and how Roberto does not quite fit in with the other termites. He follows his dreams, and eventually, parent termites want their kids to be just like him! The illustrations in this book are also great!
Read more
Helpful
Report abuse
See all reviews

Deed75
5.0 out of 5 stars Cute story
Reviewed in the United States on January 25, 2018
Verified Purchase
Really cute story about a termite that follows his dream despite what others say. My son read it to his 3rd grade class and they loved it too. I would say this book is good for 1st-3rd graders.
Read more
One person found this helpful
Report abuse

Houston Reader
5.0 out of 5 stars Great Story and Illustrations
Reviewed in the United States on November 7, 2017
Verified Purchase
I have probably read this book to my boys 100 times now and they always love Roberto. My youngest son, Elias, wanted to give the book ten stars instead of five.
Read more
2 people found this helpful
Report abuse

Elena
5.0 out of 5 stars Love this book!
Reviewed in the United States on December 28, 2020
Verified Purchase
I always look for books with a positive message. This one defiantly has it. And they way author plays with words and names are a special treat for adults )
Read more
Report abuse
See all reviews
Back to top
Get to Know Us
Make Money with Us
Amazon Payment Products
Let Us Help You
EnglishChoose a language for shopping. CanadaChoose a country/region for shopping.
© 2008-2021, Amazon.com, Inc. or its affiliates