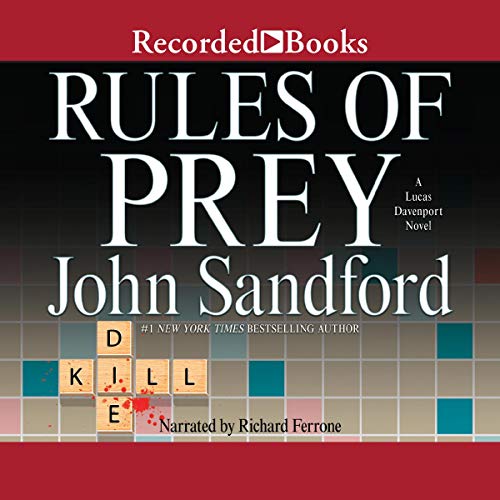 John Sandford (Author), Richard Ferrone (Narrator), Recorded Books (Publisher) & 0 more
4.4 out of 5 stars 4,971 ratings
See all formats and editions
Sorry, there was a problem loading this page. Try again.
The "maddog" murderer who is terrorizing the Twin Cities is two things: insane and extremely intelligent. He kills for the pleasure of it and thoroughly enjoys placing elaborate obstacles to keep police befuddled. Each clever move he makes is another point of pride. But when the brilliant Lieutenant Lucas Davenport, a dedicated cop and a serial killer's worst nightmare, is brought in to take up the investigation, the maddog suddenly has an adversary worthy of his genius.
Read more
©1989 John Sandford (P)2005 Recorded Books, LLC
Previous page
Next page
Learn more about membership
List Price: $27.77
You Save: $3.47 (12%)
By completing your purchase, you agree to Audible's Conditions Of Use and Amazon's Privacy Notice. Tax where applicable.
Sold and delivered by Audible, an Amazon company

4.4 out of 5 stars
4.4 out of 5
4,971 global ratings
How are ratings calculated?
To calculate the overall star rating and percentage breakdown by star, we don’t use a simple average. Instead, our system considers things like how recent a review is and if the reviewer bought the item on Amazon. It also analyzes reviews to verify trustworthiness.
Top reviews

Thomas LaBelle
3.0 out of 5 stars Good Start.
Reviewed in Canada on October 25, 2019
Verified Purchase
Davenport is a great character and it is interesting to see the character evolve as the series progresses. In Rules of Prey, he's the about the uncoppest cop ever and not that believable as one. Drives a Porsche? OK. I guess. It takes several novels to flesh out Lucas's character and make it more solid and believable but Sandford/Camp eventually hits his stride. It ain't Shakespeare but I love the Prey series and this is a good place to start. At the beginning.
Read more
One person found this helpful
Helpful
Report abuse

Linda
5.0 out of 5 stars Good story, well narrated.
Reviewed in Canada on October 8, 2021
Verified Purchase
First book I've read by this author. I've already started another one. I liked that the the story was complex enough to keep me interested right to the end. I also like the lead cop character & how human the author made him.
Read more
Helpful
Report abuse

Pat the cat
3.0 out of 5 stars The first Lucas Davenport novel -- a promising series...
Reviewed in Canada on May 23, 2012
Verified Purchase
This is the first book that I read by this author. I picked it up because Stephen King had liked it. This is the first novel in a long series that features the smart Lucas Davenport detective. It was first published in 1989. This is apparently the 2nd novel ever written by Sandford -- and it's a very solid and entertaining story. I liked how the police force and serial killer were not painted as super heroes. I liked how the story and plot twists were realistic and not overshadowed by all of the technological gadgets that clutter our daily lives. The characters in this book didn't even have cell phones!! The story moves at a steady pace with good dialogues. I enjoyed it very much and look forward to making my way through the 20-book series. I give it 3/5 stars -- good book.
Read more
Helpful
Report abuse

Dana Rudko
4.0 out of 5 stars Good read
Reviewed in Canada on September 26, 2021
Verified Purchase
Never read this author before, enjoyed it the Lucas character was interesting. Some parts didn’t work but all in all it was good
Read more
Helpful
Report abuse

Chiorisi
5.0 out of 5 stars Good Purchase
Reviewed in Canada on July 29, 2018
Verified Purchase
Best thriller! Good writing. Complex characters. This is the first book in the series so start here, then read the rest! John Sandford (John Camp) always has a twist at the end which pulls everything together. The most satisfying series I've read. You will not be bored.
Read more
Helpful
Report abuse

ByLiz
5.0 out of 5 stars Yes! Kindle edition at last
Reviewed in the United Kingdom on December 3, 2018
Verified Purchase
The first of John Sandford's Prey series - and it is worth reading them in order. What's amazing is that the 29th book in the series is due in April 2019 and not one of them has been of the pot-boiler type. I have them all and my only gripe has been that the earlier ones were only hard copy. I'm SOOOOO pleased that this series is finally being released in Kindle. My old paperback copy of 'Rules' is beginning to fall apart - plus the print is a bit small nowadays!
Read more
17 people found this helpful
Report abuse

Galning
2.0 out of 5 stars Not keen
Reviewed in the United Kingdom on March 27, 2020
Verified Purchase
I'll put a **SPOILER ALERT** in first, as I will be revealing bits of the plot

First up - all the bits about the games he plays with his friend the nun (?) and a couple of others. As a non-American I couldn't follow it easily and so started skimming the pages. Ditto when there was reams of stuff about the software he was writing. Never a good sign when you start skipping through chunks of a book.

Second - REALLY didn't like the relationship between Lucas and the press. It's a real bug bear of mine that the media lately are often more interested in being first than in being right - and that some of the scoops in this book actually endangered people. The fact that Lucas was feeding them information was even more annoying.

Thirdly - his relationship with Jennifer was just a joke. I felt it lost all credibility when she listened in on one of his work phone calls, from another room. And, with hindsight, why were all the reporters bimbo females? Ready to fall into bed with our hero...

Fourth irritation - I didn't like Lucas. No redeemable characteristics.

The portrayal of the serial killer was quite chilling - but it wasn't enough to make me want to read any more by the author, I'm afraid.
Read more
6 people found this helpful
Report abuse

Lynda Kelly
4.0 out of 5 stars New Series To Me
Reviewed in the United Kingdom on March 3, 2019
Verified Purchase
This is a new author to me and it seems I'm really late to the party in discovering him, since this was written back in 1989 !! It is interesting having to go back to times when police need to utilise call-boxes as it was back before smartphones and computers really caught on. Things have moved on so fast technology-wise since then it's often hard to fathom.
I like Lucas, though he really skates close to the edge, both at work and in his personal life. A few times his actions made me gasp and not always in a good way ! As for the women in his life, I adored Elle and Carla but wasn't as struck on Jennifer. She's a conniving cow and I hate that.
You do have to admire how Lucas solved this particular case, though. I tipped an imaginary hat to him. There were some funny little comments here and there that made me smile, too.
I spotted only a couple of mistakes and they seemed to be copy-typing mistakes, using arid and not and he also used the words ringer a few times when I think he was referring to fingers and I'm unsure whether that was a typo or some sort of slang but then we also had rinding where I think finding was meant...... I didn't know what a musky was so looked it up and it seems to be usually written muskie. He also wrote "....the whole neighborhood must have waked up" instead of woken and mat black and not matt.
This isn't horrendous for a free book, though, and his first, so no doubt things improve. Looking forward to reading more of this series.
Read more
3 people found this helpful
Report abuse

JoeDoeBooks
4.0 out of 5 stars A great, pacey, serial killer thriller
Reviewed in the United Kingdom on February 19, 2019
Verified Purchase
I don’t really know why, but me and John Sandford got off on the wrong foot. At a friend’s recommendation I read one of his later books and really, really didn’t enjoy it. Thankfully, the same friend was insistent and last year I read and enjoyed the Virgil Flowers story, Escape Clause, and this month I finished Rules of Prey, the first in the Lucas Davenport Series. And I loved it.
It’s a great, pacey, serial killer thriller. There’s a bad guy with a plan, a successful plan. There are well-meaning cops with little or no chance of catching the guy unless he makes a mistake, and finally, there’s the lead, a man determined, capable and ruthless enough to force that mistake.
There’s a convoluted, soap opera-ish back-story that should detract from my enjoyment but that is so well written and so subservient to the plot that it doesn’t. And when I say it’s subservient, I mean that it is both secondary in the story and secondary in the lives of the characters. A trick that allows you to enjoy the private life of the hero without ever worrying that it will take over the book.
Added to that there’s an incredibly accomplished setting. Davenport feels like an established character dropped down into the beginning of a new series. It really feels like you are reading the third or fourth in a series, without ever feeling like you’ve missed out or been cheated. There are the usual genre tricks, but Sandford steers a deft course with them, fliting with but never crossing that line where your eyes start to roll.
It’s a great book and especially impressive as the first in a long, long series. All I have to do now is work my way back though the series, until I reach that earlier read, and find out who was wrong, me or John?
Read more
2 people found this helpful
Report abuse

Andrew Bedford
5.0 out of 5 stars A pacy, intriguing novel seemingly set in the late 80s?
Reviewed in the United Kingdom on March 15, 2021
Verified Purchase
I enjoyed this murder\ mystery. Lucas Davenport is a Detective in the US. A maverick who works parallel to investigations to give him chance to breathe. By that they mean he is slightly "outside of the law" in some of the things he does.
A good story line, well developed.
The plot made sense as it progressed and the conclusion was quite swift and had no great leaps of logic. always some luck, of course.
I enjoyed the read.
It took a week or so but I looked forward to the story and he few chapters every night.
I may purchase the next in the series to see how it goes.
Read more
Report abuse
See all reviews