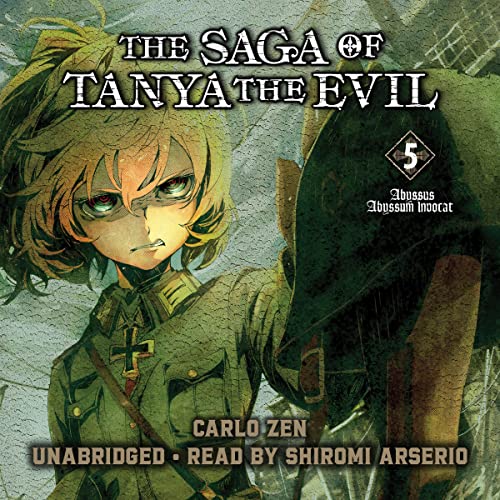 The Saga of Tanya the Evil, Vol. 5: Abyssus Abyssum Invocat

Barely two months remain until winter, and opinion is split over whether the Empire should launch a full-scale offensive or rest until spring. Time is running out, and the General Staff can't make up their minds. While everyone else is frozen with inaction, the Salamander Kampfgruppe under Tanya's command is singled out for a mission that will ultimately decide the army's course. As they face attacks from a seemingly relentless enemy that leave them without even time to sleep, will Tanya's troops be able to hold out?

4.8 out of 5 stars
4.8 out of 5
548 global ratings
How are ratings calculated?
To calculate the overall star rating and percentage breakdown by star, we don’t use a simple average. Instead, our system considers things like how recent a review is and if the reviewer bought the item on Amazon. It also analyzes reviews to verify trustworthiness.

Jason E.
5.0 out of 5 stars Love it
Reviewed in Canada 🇨🇦 on August 4, 2019
Verified Purchase
I. JUST. LOVE. IT. I really love this series by Carlos zen a very good read. A must read for good story
Read more
Helpful
Report abuse

Sylph
5.0 out of 5 stars Great as usual
Reviewed in Canada 🇨🇦 on June 21, 2019
Verified Purchase
It’s kinda scary how after every volume I see the publish year getting closer and closer, means I’m already almost caught up.
Read more
Helpful
Report abuse
See all reviews

Jeff Clark
5.0 out of 5 stars Well accepted presents
Reviewed in the United Kingdom 🇬🇧 on January 14, 2021
Verified Purchase
This, and several other of the same genre were purchased as a present for our Manga Mad nephew, we have heard very little except gratitude since so presumably they are very satisfactory. Personally I prefer to start at the front and read left to right.....
JC
Read more
Report abuse

Mark
5.0 out of 5 stars Waiting impatiently for vol 6
Reviewed in the United Kingdom 🇬🇧 on May 20, 2019
Verified Purchase
With how this volume ended leaves me believing that the next one will be the climax and oh boy am I eager to find out. This tension reminds me of how I felt after halo 2. With how impossible things are getting for Tanya it’s going to be interesting to say the least!
Read more
Report abuse

Amazon Customer
5.0 out of 5 stars Immaculate Novel
Reviewed in the United Kingdom 🇬🇧 on June 18, 2019
Verified Purchase
The illustrations and cover designs are astounding and the story is as intriguing as ever. The English translations are also insanely well interpreted from the Japanese. The quality goes well beyond what i'd expect from any novel in general.
Read more
Report abuse

Zgerken
5.0 out of 5 stars Absolutely love it
Reviewed in the United Kingdom 🇬🇧 on July 14, 2019
Verified Purchase
A character that constantly keeps you on your toes, an interesting plot line, can't wait for the next installment
Read more
Report abuse