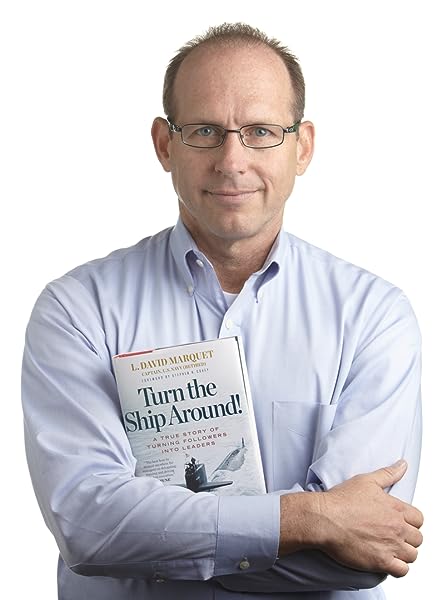 Say Less, Lead More: How Small Changes in What You Say Can Make a Huge Difference to Your Team’s Results Paperback

4.6 out of 5 stars 875 ratings
See all formats and editions
Sorry, there was a problem loading this page. Try again.
Great on Kindle
Great Experience. Great Value.

View the Kindle edition of this book
Get the free Kindle app:

Enjoy a great reading experience when you buy the Kindle edition of this book. Learn more about Great on Kindle, available in select categories.
View Kindle Edition

In Leadership Is Language, former US Navy captain L. David Marquet offers a radical playbook to empower your people and put your team on a path to continuous improvement. The framework will help you achieve the right balance between deliberation and action, and take bold risks without endangering your mission. As a submarine captain, Marquet used his counterintuitive model of leadership to turn the worst-performing submarine crew into the best-performing one in the fleet, a story he recounted in his bestselling book Turn the Ship Around! Now, in Leadership Is Language, he draws on a wide range of examples, from the 2017 Oscars Best Picture mishap to the tragic sinking of the SS El Faro, to show you exactly how the words you use (and don't use) impact how your people contribute.

A 1981 U.S. Naval Academy graduate, Captain Marquet served in the U.S. submarine force for 28 years. After being assigned to command the nuclear powered submarine USS Santa Fe, then ranked last in retention and operational standing, he realized the traditional leadership approach of “take control, give orders,” wouldn’t work. He “turned the ship around” by treating the crew as leaders, not followers, and giving control, not taking control. This approach took the Santa Fe from “worst to first,” achieving the highest retention and operational standings in the navy.

After David’s departure from the ship, the Santa Fe continued to win awards and promoted a disproportionate number of officers and enlisted men to positions of increased responsibility, including ten subsequent submarine captains. Further, having been on the ship, Stephen R. Covey said it was the most empowering organization he’d ever seen and wrote about Captain Marquet’s leadership practices in his book, The 8th Habit.

Captain Marquet is the author of Leadership is Language, Turn the Ship Around! and companion workbook,The Turn the Ship Around Workbook. Fortune magazine called the book the “best how-to manual anywhere for managers on delegating, training, and driving flawless execution.”

Captain Marquet retired from the Navy in 2009, and delivers the powerful Intent-Based Leadership message: that leadership is not for the select few at the top. In highly effective organizations, there are leaders at every level. David speaks to those who want to create empowering work environments that release the passion, initiative, and intellect of each person. His bold and highly effective framework is summarized as “give control, create leaders.”

He lives in Florida, is an enthusiastic novice trail runner, and a life member of the Council on Foreign Relations.

4.6 out of 5 stars
4.6 out of 5
875 global ratings
How are ratings calculated?
To calculate the overall star rating and percentage breakdown by star, we don’t use a simple average. Instead, our system considers things like how recent a review is and if the reviewer bought the item on Amazon. It also analyzes reviews to verify trustworthiness.
Top reviews

Richard
5.0 out of 5 stars Must have for anyone wanting to evolve their company away from the past
Reviewed in Canada on March 8, 2020
Verified Purchase
Really adds some great current state and future state visions and approaches.

The common language made it so easy to understand.

Mark Calpin
5.0 out of 5 stars Brilliant, Engaging, Sharp and Practical
Reviewed in the United Kingdom on April 13, 2021
Verified Purchase
Cuts through the noise that exists in the workplace (how many useless emails have you received today?) and shows you how to lead people in the most effective way.

It's not about manipulation or coercion but getting everyone comfortable to commit to the teams work.

Try the sample if you need a bit more convincing.

And as a final gift, the materials that David provides through his LinkedIn and YouTube presence are really worthwhile and keep things fresh.

Now, stop reading this review (good as it is) and read the book (which is really great)!
Read more
2 people found this helpful
Report abuse

Christine
5.0 out of 5 stars The future of accomplishment with enjoyment!
Reviewed in the United Kingdom on February 7, 2020
Verified Purchase
I totally love David’s approaches to leadership. They are clear and simple messages and this book has some great relatable stories and lots of good examples of the things to say and not to say. People and teams want to collaborate, learn and work together to accomplish outstanding results. If you harness all their collective energy together it results in enjoyment fun and gets results. The red and blue doing and thinking is something I am already working towards and I didn’t even know it! High five to David for sharing his insights and messages so wonderfully and providing great inspiration and insight.
Read more
3 people found this helpful
Report abuse

James
5.0 out of 5 stars Amazing! Insightful! Engaging! - A Must Read
Reviewed in the United Kingdom on April 21, 2020
Verified Purchase
This book is amazing! The writing style, content and tools enclosed are insightful and will go along way in every situation and stage of my life. It’s brought peace of mind and understanding that the impact of how I lead at work can be improved through the language I use. I can’t recommend this book enough, you won’t regret the purchase. I wish I’d found it earlier!
Read more

5.0 out of 5 stars Amazing! Insightful! Engaging! - A Must Read
Reviewed in the United Kingdom on April 21, 2020
This book is amazing! The writing style, content and tools enclosed are insightful and will go along way in every situation and stage of my life. It’s brought peace of mind and understanding that the impact of how I lead at work can be improved through the language I use. I can’t recommend this book enough, you won’t regret the purchase. I wish I’d found it earlier!
Images in this review

Daniel Breston
5.0 out of 5 stars Changed the way i speak as a coach and a person
Reviewed in the United Kingdom on November 12, 2020
Verified Purchase
I was looking for a way to change the way I articulate to leaders as a coach. I found ways of changing the way I think and behave. Simple exercises. Real examples. Simple but powerful language in the book. Overwhelmed.
Read more
One person found this helpful
Report abuse

Matt S
3.0 out of 5 stars A solid follow-up book but dragged in the middle
Reviewed in the United Kingdom on October 21, 2020
Verified Purchase
I enjoyed L. David Marquet's previous book, Turn That Ship Around, and this was a decent follow-up, building on similar themes. The downside of this book was that it seemed to drag and become a little repetitive in the theory-heavy middle, before picking up with more practical examples and case studies.
Read more
Report abuse
See all reviews