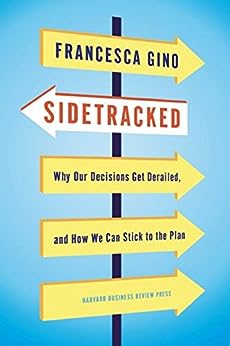 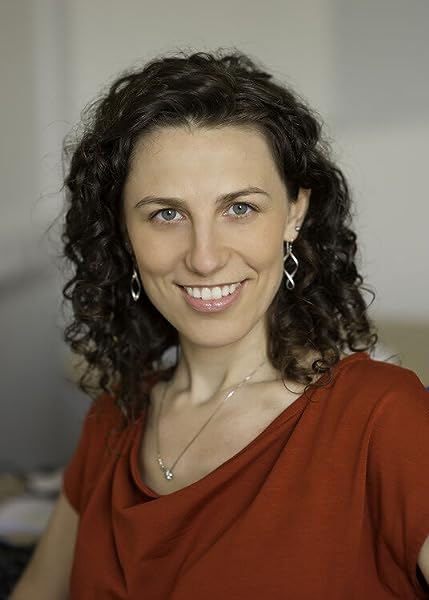 Sidetracked: Why Our Decisions Get Derailed, and How We Can Stick to the Plan Kindle Edition

by Francesca Gino (Author) Format: Kindle Edition
See all formats and editions
Sorry, there was a problem loading this page. Try again.
You may not realize it but simple, irrelevant factors can have profound consequences on your decisions and behavior, often diverting you from your original plans and desires. Sidetracked will help you identify and avoid these influences so the decisions you make do stick—and you finally reach your intended goals.

Psychologist and Harvard Business School professor Francesca Gino has long studied the factors at play when judgment and decision making collide with the results of our choices in real life. In this book she explores inconsistent decisions played out in a wide range of circumstances—from our roles as consumers and employees (what we buy, how we manage others) to the choices that we make more broadly as human beings (who we date, how we deal with friendships). From Gino’s research, we see when a mismatch is most likely to occur between what we want and what we end up doing. What factors are likely to sway our decisions in directions we did not initially consider? And what can we do to correct for the subtle influences that derail our decisions? The answers to these and similar questions will help you negotiate similar factors when faced with them in the real world.

For fans of Dan Ariely and Daniel Kahneman, this book will help you better understand the nuances of your decisions and how they get derailed—so you have more control over keeping them on track.
Read more
Previous page
Next page

“Similar to Chip and Dan Heath’s Made To Stick and Malcolm Gladwell’s The Tipping Point, this book will appeal to those looking to build their business platform.”
—Library Journal

“Thoroughly researched and informative, the book’s clarity and simplicity of structure are quite refreshing. Gino possesses a wealth of well-constructed research and experience—both inside university labs and in the business world. This book is filled with carefully explained studies that have taken many years to collect and establish, as well as many insights from the business consulting world.”
—Business World Magazine

“For the general reader desiring to learn more about research studies on some human decision biases and their effects, this book can provide a valuable perspective.”
—Choice Magazine

“A powerful survey outlining the entire decision-making process, how it gets derailed, and how to get it back on track.”
—Midwest Book Review

“What separates Sidetracked . . . from some other books on decision making is an in-depth exploration of the ‘human’ obstacles as opposed to the ‘organizational’ obstacles that can inhibit sound decision-making processes.”
—Business Standard

“If you have always yearned to feel more secure in your decision-making, or at the very least, understand better why even your best-laid plans often go awry, Sidetracked is a straight-forward examination of the forces that affect our decisions which can help raise your awareness and keep you from veering off course.”
—800 CEO READ

FRANCESCA GINO is Associate Professor of Business Administration in the Negotiation, Organizations, & Markets Unit at the Harvard Business School. Her research focuses on judgment and decision making, social influence, and ethics and creativity. Her studies have been featured on CNN and NPR, as well as in leading print publications including Economist, Financial Times, New York Times, Newsweek, Scientific American, and Psychology Today.

TAMARA MARSTON has been an actor, singer and director for over 30 years. A career performer / musician, Tami has toured nationally with several groups and appeared on The Arsenio Hall Show and A&E’s Goodtime Café. Dividing her time between acting and singing gigs, choral conducting, music and stage directing, jingle and voiceover work, private and public teaching—and family—Tami feels very fortunate to make her living working in the arts. --This text refers to an out of print or unavailable edition of this title.

Francesca Gino is an award-winning researcher and teacher, and a tenured professor at Harvard Business School. Her consulting and speaking clients include Bacardi, Akamai, Disney, Goldman Sachs, Honeywell, Novartis, P&amp;G, and the U.S. Air Force, Army, and Navy. She has been honored as one of the world’s Top 40 Business Professors under 40 and one of the world’s 50 most influential management thinkers. Her work has been featured on CNN and NPR, as well as in the Economist, Financial Times, New York Times, Newsweek, Scientific American, and Psychology Today.

3.7 out of 5 stars
3.7 out of 5
44 global ratings
How are ratings calculated?
To calculate the overall star rating and percentage breakdown by star, we don’t use a simple average. Instead, our system considers things like how recent a review is and if the reviewer bought the item on Amazon. It also analyzes reviews to verify trustworthiness.
Top reviews

Teacher P
3.0 out of 5 stars Not quite what the title implies
Reviewed in Canada on October 6, 2013
Verified Purchase
Gino recounts in fairly simplified terms a long series of academic experiments, mostly using students with occasional field trials or anecdotes from the psychology literature, to illustrate some basic principles of judgement errors. The majority of the book emphasizes this research approach, drawing conclusions or recommendations stated in didactic phrases - however, the book stops at WHY, and doesn't go on to explain in similar detail HOW to retrain yourself (or others) to avoid or at least realize an opportunity.

The range of experiments and collaborators speak to the author's lively and inquiring mind!
Read more
Helpful
Report abuse

Robert Morris
HALL OF FAME
5.0 out of 5 stars A brilliant analysis of how we make decisions and why some decisions can be inconsistent with our original plans
Reviewed in Canada on January 31, 2014
As Francesca Gino explains, "Three different sets of forces influence our decisions in ways we commonly fail to anticipate: (1) forces from within ourselves, (2) forces from our relationships with others, and (3) forces from the outside world." Gino shares and correlates the results of various studies that have examined the power of these forces and how they operate. It is important to keep in mind that these are not forces to control; rather, forces that can be managed, once understood. Hence the importance of this book, of its potential value to those who read it with an open mind and are willing to address forces within themselves -- "that reside within our minds and our hearts, and exist because of the very nature of being human" -- forces that probably cause more sidetracking than any others do.

These are among the dozens of business subjects and issues of special interest and value to me, also listed to indicate the scope of Gino's coverage.

I agree with Gino about the importance of formulating what can serve as a contingency plan for all manner of situations in which we would otherwise be unprepared. For example, "we rush into negotiations without taking the time to clarify our objectives, interests, and positions; the range of emotions we could experience during talks; and the information we have about the other side." I presume to add another substantial benefit of having a pre-negotiation plan: understanding the forces within us will enable us to be aware of where and why we may be (or at least seem) most vulnerable.

Before concluding her book, Gino reviews nine principles to keep in mind when formulating and implementing plans (227-228). No brief commentary such as mine can do full justice to the wealth of information, insights, and counsel that Francesca Gino provides. However, I hope these remarks indicate why I think so highly of Sidetracked. Obviously not all decisions are sound. Those who read it will be well-prepared to create appropriate plans, then know which to protect from derailment and which to modify or abandon.
Read more
Helpful
Report abuse
See all reviews

Mark
4.0 out of 5 stars Defence against self deception
Reviewed in the United Kingdom on February 23, 2013
Verified Purchase
If Francesca Gino was a professor at Hogwarts she would surely teach Defence Against the Dark Arts. The dark art she would most warn us of is how we can so easily fool ourselves. I've scored this a 4 star book because I enjoyed it and the advice is useful, evidence based and practical. The ideas are brought to life through novel stories such as the way emotional feedback is used by the Ducati Moto GP team. It's a book worth buying for the 9 key messages alone.

The final star is lost because there was just a little too much overlap with Dan Ariely's excellent `The Honest Truth about Dishonesty' which is no surprise as they worked together on much of the research. I hope that in her future books Francesca will use more of her own story examples.

A quote in the book sums up the key message perfectly:

"Nothing is easier than self-deceit. For what each man wishes, that he also believes to be true." Demosthenes (384- 322 BC),

Sidetracked details this potential for self deception in 3 key areas:

- how our internal world can distract us
- how our social connections impact on us and
- how our external environment can change our behaviour.

This is further broken down into 9 key messages which I've put into my own words below.

- Don't believe your own hype, listen to useful advice from others too
- Check how you feel before making decisions (Emotional Intelligence)
- Step back and see the bigger pattern

For me these 9 steps clarify many of the messages in Daniel Kahneman's book Thinking Fast and Slow and offer a practical guide to staying out of the traps our mind can so easily fall into. I've already found the 9 steps a practical way to improve my decision making.
Read more
11 people found this helpful
Report abuse

Ju
3.0 out of 5 stars Interesting but
Reviewed in the United Kingdom on August 31, 2013
Verified Purchase
About half way through so far - some really interesting content and ideas, with the evidence for them, but in some cases, too much evidence - I want to know that the experiments were sound, not everything about them and sometimes I feel the author gets carried away with the details.
Read more
One person found this helpful
Report abuse

Boris Bretzer
3.0 out of 5 stars Interesting Summary of Known Information
Reviewed in Germany on November 1, 2015
Verified Purchase
The book includes a nice summary of factors, which influence people trying to reach their goals.It is structured in an understandable way. However I rarely found information, which is new for me. The book might provide more value for people, who did not focus on psychology before.
Read more
Report abuse

Mayank Prasad Bhatnagar
5.0 out of 5 stars Great, research backed
Reviewed in India on May 7, 2016
Verified Purchase
Experiments presented in a very interesting way, likely to stick. Will use the work in my decision making. Recommended reading.
Read more
Report abuse
See all reviews
Report an issue
Does this item contain inappropriate content?
Report
Do you believe that this item violates a copyright?
Report
Does this item contain quality or formatting issues?
Report