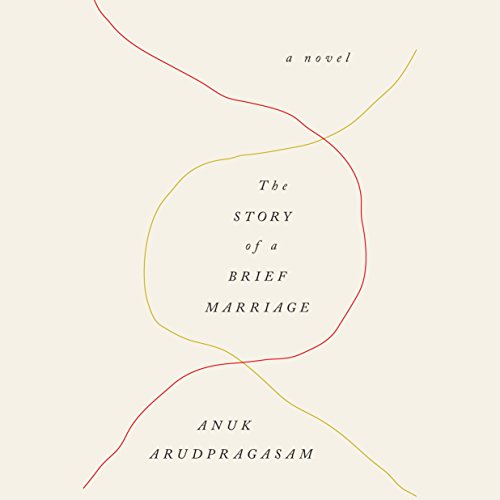 The Story of a Brief Marriage

Shortlisted for the Dylan Thomas Prize

Two and a half decades into a devastating civil war, Sri Lanka's Tamil minority is pushed inexorably towards the coast by the advancing army. Amongst the evacuees is Dinesh, whose world has contracted to a makeshift camp where time is measured by the shells that fall around him like clockwork. Alienated from family, home, language, and body, he exists in a state of mute acceptance, numb to the violence around him, till he is approached one morning by an old man who makes an unexpected proposal: that Dinesh marry his daughter, Ganga. Marriage, in this world, is an attempt at safety, like the beached fishing boat under which Dinesh huddles during the bombings. As a couple, they would be less likely to be conscripted to fight for the rebels, and less likely to be abused in the case of an army victory. Thrust into this situation of strange intimacy and dependence, Dinesh and Ganga try to come to terms with everything that has happened, hesitantly attempting to awaken to themselves and to one another before the war closes over them once more.

Anuk Arudpragasam's The Story of a Brief Marriage is a feat of extraordinary sensitivity and imagination, a meditation on the fundamental elements of human existence - eating, sleeping, washing, touching, speaking - that give us direction and purpose, even as the world around us collapses. Set over the course of a single day and night, this unflinching debut confronts marriage and war, life and death, bestowing on its subjects the highest dignity, however briefly.

List Price: $25.00$25.00
You Save: $1.90$1.90 (8%)
By completing your purchase, you agree to Audible's Conditions Of Use and Amazon's Privacy Notice. Tax where applicable.
Sold and delivered by Audible, an Amazon company

4.2 out of 5 stars
4.2 out of 5
220 global ratings
How are ratings calculated?
To calculate the overall star rating and percentage breakdown by star, we don’t use a simple average. Instead, our system considers things like how recent a review is and if the reviewer bought the item on Amazon. It also analyzes reviews to verify trustworthiness.

Amazon Customer
2.0 out of 5 stars Two Stars
Reviewed in Canada 🇨🇦 on November 30, 2016
Verified Purchase
Concept is good but too much description. Found it dragging most of the time.
Read more
One person found this helpful
Helpful
Report abuse

THOMAS P T
1.0 out of 5 stars Average story line
Reviewed in Canada 🇨🇦 on March 20, 2021
Verified Purchase
We can appreciate and empathize with the ravages of war on humanity but the scenes and feelings are over described to a point where it paralyzes the narrative
Read more
Helpful
Report abuse
See all reviews

Geoff Crocker
4.0 out of 5 stars The banality of life and death
Reviewed in the United Kingdom 🇬🇧 on November 28, 2016
Verified Purchase
Anuk Arudpragasam details the horror of the Sri Lankan army assault on the ‘Tamil Tiger’ strongholds in the north of the country which ended in 2009, for which the international community has accused the Sri Lankan government of war crimes. The ordinary civilian population was subject to indiscriminate shelling. Many died. Dinesh typifies the suffering and struggle for survival, living in the midst of routine, habitual death and mutilation. The population drifts on in hopeless futility. Life, including marriage, continues, but its banality is exposed. Death is expected. Arudpragasam’s writing is often flat and matter of fact, conveying the very ordinary detail of life reduced to mere existence.
Read more
4 people found this helpful
Report abuse

Robin
2.0 out of 5 stars Big hopes but a little disappointing
Reviewed in the United Kingdom 🇬🇧 on November 15, 2017
Verified Purchase
Really wanted to like this. Good reviews and interesting subject matter. It's a short book but took me ages to get through. Just couldn't get into it. Very slow pace and the editing could be better as there is some odd phrasing in places. A little disappointing.
Read more
2 people found this helpful
Report abuse

Kristien Wynants
2.0 out of 5 stars Not a great read
Reviewed in the United Kingdom 🇬🇧 on September 17, 2019
Verified Purchase
Not quite what I expected. Did not enjoy this book.
Read more
Report abuse

Karman S.
5.0 out of 5 stars Read for the prose.
Reviewed in India 🇮🇳 on October 5, 2021
Verified Purchase
The writing is poetic, yet grounded so it doesn't seem made-up. Innocuous activities are detailed in long paragraphs and multiple pages, yet to me it never appeared to be unnecessary. They're filled to the brim with metaphors, yet never does the subject seem exaggerated or the writing pretentious. It's words tiled together, in a raw and unapologetic way and the book is truly a work of art. For the writing enthusiasts.

P. S. The only trouble I faced was the lack of proper punctuations that confused me at times. Maybe it was a creative decision of the writer to do so, but it was certainly annoying.
Read more
2 people found this helpful
Report abuse

ramendra singh
3.0 out of 5 stars A gory tale
Reviewed in India 🇮🇳 on December 27, 2017
Verified Purchase
An extremely gory tale written in a prosaic manner. Storyline doesn't seem moving and the author seems to be plunging deeper in the ravages of the internecine low density war . A good attempt to bring the dark side of the vagaries of an internal war , a subject which has not been touched upon widely but deserves more .
Well written , lucidly expressed , pregnant with dark images which could be disturbing and distressing .
Read more
5 people found this helpful
Report abuse
See all reviews