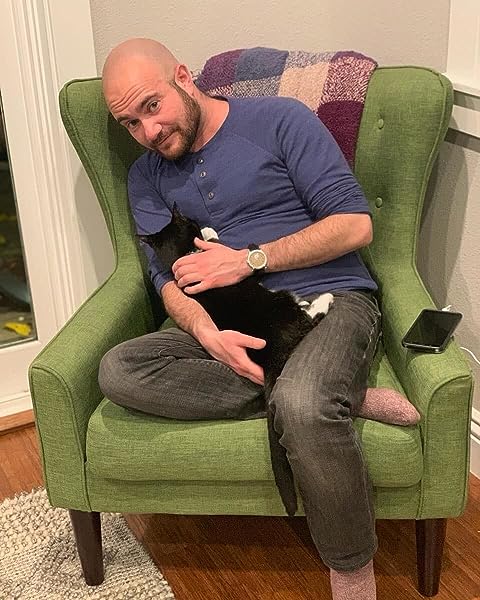 by Kyle Lukoff (Author), Kat Uno (Illustrator)
4.3 out of 5 stars 15 ratings
Book 1 of 3: Mermaid Days
See all formats and editions
Sorry, there was a problem loading this page. Try again.

Dive under the sea with Mermaid Days, a series perfect for beginning readers!

Pick a book. Grow a Reader!

This series is part of Scholastic's early reader line, Acorn, aimed at children who are learning to read. With easy-to-read text, a short-story format, plenty of humor, and full-color artwork on every page, these books will boost reading confidence and fluency. Acorn books plant a love of reading and help readers grow!

Swim along with mermaid Vera and octo-kid Beaker! In these three stories, Vera and Beaker go on adventures in their town of Tidal Grove. They explore a sunken ship, and Vera helps Beaker with an unusual octopus problem. With text from Stonewall award-winning author Kyle Lukoff, and bright, colorful artwork from artist Kat Uno, Mermaid Days is sure to be every young reader’s favorite new series. Balancing easy-to-read-text, endless humor and charm, light nonfiction, and a loveable cast of underwater creatures, these laugh-out-loud stories are the perfect fit for new readers!

Plant a Love of Reading with Acorn Early Readers!

The Acorn early reader line is aimed at children who are learning to read. With easy-to-read text, a short story format, and full-color artwork on every page, Acorn books boost reading confidence and fluency. Acorn books plant a love of reading and help readers grow!

Praise for Too Bright to See, by Kyle Lukoff:

* “This coming-of-age and coming-out story takes a needed departure from other stories about transgender youth… Haunting and healing.” – Kirkus, starred review

* "A hopeful examination of grief and gender, and a good ghost story to boot." – School Library Journal, starred review

Praise for When Aidan Became a Brother, by Kyle Lukoff:

Best of the Best Books of 2019, Chicago Public Library

* "Joyful and affirming, Aidan's story is the first of its kind among books for welcoming a new baby." -- Starred review, Kirkus Reviews

* "The creators' exploration of one transgender child's experience emphasizes the importance of learning "how to love someone for exactly who they are." --Starred review, Publishers Weekly

KYLE LUKOFF is a National Book Award finalist and the Newbery and Stonewall Award-winning author of multiple books for young readers, including When Aidan Became a Brother, Call Me Max, and Too Bright to See. Kyle spent eight years as an elementary school librarian, but now he writes full time, assists in sensitivity readings and consultations, and presents on children’s and youth literature all across the country. He got hired at a bookstore when he was sixteen, which means he’s been working at the intersection of books and people for well over half his life. He lives in Philadelphia. Visit him online at kylelukoff.com.

Kat Uno was born and raised in Hawaii, on the island of Maui. She was influenced at an early age by comics, Saturday morning cartoons, and Japanese manga. She attended the University of Hawaii and received a Bachelor of Arts. Kat loves creating artwork that is cute and fun. She is the mother of two wonderful little kids who are a constant source of inspiration. Visit her online at katuno.com

4.3 out of 5 stars
4.3 out of 5
15 global ratings
How are ratings calculated?
To calculate the overall star rating and percentage breakdown by star, we don’t use a simple average. Instead, our system considers things like how recent a review is and if the reviewer bought the item on Amazon. It also analyzes reviews to verify trustworthiness.

Mr and Mrs Smith
5.0 out of 5 stars Too cute
Reviewed in the United States 🇺🇸 on December 20, 2022
Verified Purchase
Bought this and the other Mermaid books for my nieces for a Advent book calendar. Nice books for them.
Read more
Report abuse
See all reviews