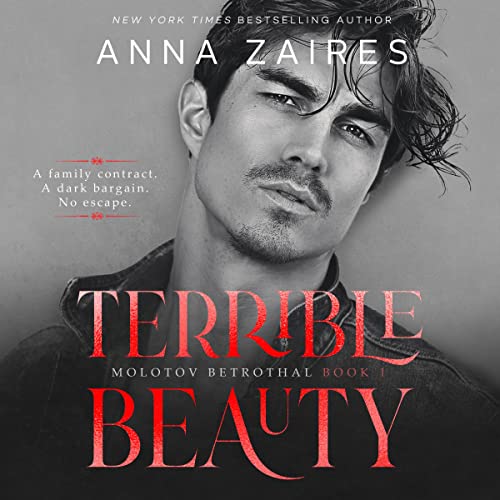 A family contract. A dark bargain. No escape.

Eleven years ago, I met him. A year later, I was betrothed to him. Now he’s come to claim me, slaughtering anyone standing in his way.

My husband-to-be is a monster from a family as ruthless and powerful as mine, a man who deals in violence and destruction...a man terrifyingly like my father. For more than a decade, he’s stalked me, shadowing my life.

My name is Alina Molotova, and Alexei Leonov is a fate I can’t escape.

Read more
©2022 Anna Zaires (P)2022 Anna Zaires
Previous page
Next page
Learn more about membership
List Price: $25.00
You Save: $3.12 (12%)
By completing your purchase, you agree to Audible's Conditions Of Use and Amazon's Privacy Notice. Tax where applicable.
Sold and delivered by Audible, an Amazon company

4.5 out of 5 stars
4.5 out of 5
1,342 global ratings
How are ratings calculated?
To calculate the overall star rating and percentage breakdown by star, we don’t use a simple average. Instead, our system considers things like how recent a review is and if the reviewer bought the item on Amazon. It also analyzes reviews to verify trustworthiness.

L.A.
5.0 out of 5 stars Loved it!!
Reviewed in Canada 🇨🇦 on October 29, 2022
Verified Purchase
I couldn't put the book down so I read it in one sitting which I have never done before. Difficult to do so when you have young children. :)

I didn't find it difficult to follow the flashbacks but I was familiar with Alina previously as I read the Devil's Lair/Angel's Cage duet.

I was really looking forward to reading this book. Anna Zaires didn't disappoint! But I would really like to know when the next book will come out as I can't wait to read it.
Read more
Helpful
Report abuse

youngstermovement101
4.0 out of 5 stars Quick and fun read
Reviewed in Canada 🇨🇦 on September 21, 2022
Verified Purchase
Really enjoyed Alexei’s and Alina’s story. It was a fun quick read and I can’t wait for the next release.
Read more
Helpful
Report abuse

Christine
4.0 out of 5 stars Alina and Alexei
Reviewed in Canada 🇨🇦 on September 20, 2022
Omg this book was sooo good! I loved Alina and Alexei! I loved that this book goes back and forth between present day and the past showing the events that lead up to the ending of Nikolai's book when Alina goes with Alexei. It was so much fun to read about their pasts but also heartbreaking to see what Alina has gone through. This book had so many twists that I didn't see coming and her appearances in Nikolai's books makes so much more sense after reading this book. I thought this was a standalone but it's not! And man am I excited to see what happens next for this couple! A really great read!
Read more
Helpful
Report abuse

NeverPatsy
5.0 out of 5 stars A well "laid" plot line to a hot new series!
Reviewed in Canada 🇨🇦 on September 24, 2022
A well "laid" beginning to what shall be another hot series... Anna Zaires should be celebrated for her ability to draw her readers immediately into the heat of passion - with a twist. Wait, what's that? She already is!
I am never disappointed with a book by this author, and that continues with Terrible Beauty.
I do love the use of the name Molotov- firey and explosive are two very definitive characteristics of the female protagonist. Alexie Leonov was the first man to step into space; and the first to explore intimate space in this book. I am not sure if this link was intended but I hope it was.
I was a bit late with this review because I ended up reading it by chapter first, but then went back to read it chronologically. I actually recommend doing this before moving on to the next book because it gives better clarity.
Excellent read which leaves me wanting to dive into the next book of the series!.

I received a free copy of this book via Booksprout and am voluntarily leaving a review.
Read more
One person found this helpful
Helpful
Report abuse

Bois M-C
5.0 out of 5 stars So great, that the end of this first book came to fast
Reviewed in Canada 🇨🇦 on September 21, 2022
I was impatient to read Alina's story after the Molotov's obsession duet books! Alina is the young sister of Nickolai Molotov . She has been betroyed to Alexei sincevshe was 15, and he was 20. She tried so hard to hide, fight her attraction from Alexei, but with his determination he found her. The chemistry between Alexei and Alina is extremly hot! Like the other books from Anna Zaires, The book ends on a cliffhanger. I cannot wait for second book to be release.
Read more
Helpful
Report abuse

Nancy
2.0 out of 5 stars OMG did I just rate an Zaires book a two?
Reviewed in Canada 🇨🇦 on October 3, 2022
Yes I did give it a 2 and shocked myself, but after gathering my thoughts to write this review I really can't justify more. I'm an AVID fan of this author and she never fails to deliver. Until this point. I actually went back and looked at about 20% to make sure she wrote it and it wasn't an author with a similar name. There were a few reaaons for my low rating and when I added them up, I could almost have given it 2 1/2 stars but just didn't feel like it rated three for me. First of all I don't like books that go back and forth over 10 years and that made the whole thing somewhat unbelievable. Seriously TEN??? Secondly the main female character didnt ever seem to grow up and was as emotionally mature at 14 as she was at 25, and that's not saying much. Thirdly this really was what appeared to be a prequel to a series but it was released as a separate stabd alone book on its own. As I finished it all I kept thinking was this was a whole lot of reading just to set up what appears to be an upcoming series and the 10 year time lag was just too much to get my head around . And finally I'm perfectly okay with it being serious -- although the info in Amazon shows it as book 1 out of 1. But here is what I find most annoying . There is absolutely zero information on when part 2 is coming out and that makes me think it's a long way down the road. I can't stand it when there's so much time lag between books in a series that I have to go back and practically speed read (reread) book 1 to figure out the who/what/why/when that got us here. And even after all these reasons, and a low rating, I will probably buy the next book in the series, but only because I've been such a fan this author through many other excellent fast pace intriguing books ... filled with multi-dimensional characters that I could connect with and still have very fond memories of these many years later. The jury is still out on Alexie and Alina ... not sure they can ever redeem themselves.
Read more
Helpful
Report abuse
See all reviews

Unicorn7
5.0 out of 5 stars Fast food
Reviewed in the United Kingdom 🇬🇧 on September 20, 2022
Verified Purchase
I loved this book and got so into it that I didn’t do any of my uni work and I forgot to make dinner. We had a takeaway instead. 🤣
I enjoyed the dual story as it provided insight as to how Alina and Alexei met.
What an ending. 🫣🫣🫣
I can’t wait for the next part!
Read more
2 people found this helpful
Report abuse

Magwan911
4.0 out of 5 stars A patient romance
Reviewed in the United Kingdom 🇬🇧 on October 22, 2022
Verified Purchase
Beautifully written with good characters and dialogue. Fighting for her freedom comes at a hefty cost. A very troubled girl, with parents who don't understand her, making all the decisions and planning her life with no consultation or consent. Enter the male interest, ruthless cunning and singular who's focus is now on the girl. Try as she might to escape her fate, he comes collecting with interest and nothing and no one will get in his way.
Definitely entertaining and worth a look, looking forward to part two. Highly recommend.
Read more
One person found this helpful
Report abuse

hayho
4.0 out of 5 stars Nail biting
Reviewed in the United Kingdom 🇬🇧 on October 2, 2022
Verified Purchase
I’ve been waiting ages for this book to come out. I finally get Alina and Alexei’s story. I now understand why Alina is the way she is. This is a wonderful book. The tension builds with every word, every chapter. By the end of the book I’m on the edge of my seat. My heart aches for Alina and everything that she goes through in this book. I can’t wait to read the next book to find out how Alexei is going to redeem himself.
Read more
One person found this helpful
Report abuse

Aria
5.0 out of 5 stars it’s just that good
Reviewed in the United Kingdom 🇬🇧 on September 22, 2022
Verified Purchase
It’s breathtaking although the to and fro over years drove me crazy but it just worked. The characters, the story and how well it was written. Couldn’t put it down and would absolutely recommend it. Thanks Anna
Read more
One person found this helpful
Report abuse

tina
5.0 out of 5 stars Loved it!
Reviewed in the United Kingdom 🇬🇧 on September 22, 2022
Verified Purchase
I've vever read a book that is as captivating as this one. Alexei is so hell bent on claiming Alina that he will stop at nothing to get her. Great story as to how they spend their time doing the cat and mouse. It keeps you riveted right to the end. Well done Anna x
Read more
One person found this helpful
Report abuse
See all reviews