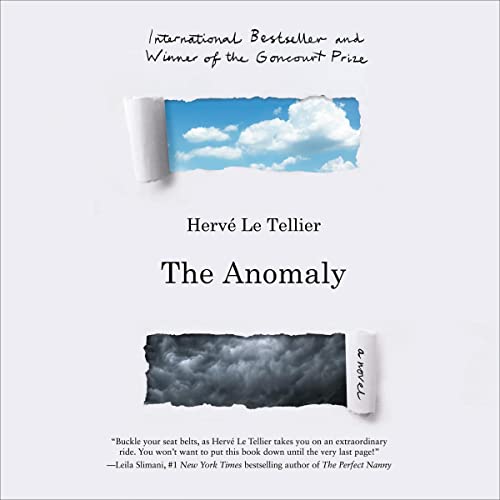 The Anomaly: A Novel

Winner of the Prix Goncourt, this dizzying literary pause-resister ingeniously blends crime, fantasy, sci-fi, and thriller as it plumbs the mysteries surrounding a Paris-New York flight.

In June 2021, a senseless event upends the lives of hundreds of men and women, all passengers on a flight from Paris to New York. Among them: Blake, a respectable family man, though he works as a contract killer; Slimboy, a Nigerian pop star tired of living a lie; Joanna, a formidable lawyer whose flaws have caught up with her; and Victor Miesel, a critically acclaimed yet commercially unsuccessful writer who suddenly becomes a cult hit.

All of them believed they had double lives. None imagined just how true that was.

A virtuoso novel where logic confronts magic, The Anomaly explores the part of ourselves that eludes us. This witty variation on the doppelgänger theme, which takes us on a journey from Lagos and Mumbai to the White House, proves to be Hervé Le Tellier’s most ambitious work yet.

Read more
©2021 Hervé Le Tellier and Adriana Hunter (P)2021 Random House Audio
Previous page
Next page
Learn more about membership
List Price: $35.09
You Save: $4.39 (13%)
By completing your purchase, you agree to Audible's Conditions Of Use and Amazon's Privacy Notice. Tax where applicable.
Sold and delivered by Audible, an Amazon company

4.1 out of 5 stars
4.1 out of 5
3,290 global ratings
How are ratings calculated?
To calculate the overall star rating and percentage breakdown by star, we don’t use a simple average. Instead, our system considers things like how recent a review is and if the reviewer bought the item on Amazon. It also analyzes reviews to verify trustworthiness.
Top reviews

Candace Small
1.0 out of 5 stars It's just like a 'movie of the week'. Not sure what all the hype was about.
Reviewed in Canada on January 18, 2022
Verified Purchase
I did finish reading it because I was bored. No other reason really. Not even the fact this guy is a french author managed to save it. Could have been written by any cheap and cheerful movie of the week guy in America. Same difference.
Read more
One person found this helpful
Helpful
Report abuse

Gloria Price
3.0 out of 5 stars The Anomaly
Reviewed in Canada on May 24, 2022
Verified Purchase
This book was O.K. I would not re-order
Read more
Helpful
Report abuse

Cara Wood
3.0 out of 5 stars So so
Reviewed in Canada on December 21, 2021
Verified Purchase
Intriguing to begin with but ends like a made for TV movie with a lot of cliche characters. I was disappointed
Read more
Helpful
Report abuse

Momo
2.0 out of 5 stars The writing is immature; shallow characters, predictable action, and a one-trick pony premise.
Reviewed in Canada on January 8, 2022
Disliked the fact that I was suckered into purchasing this by reading rave reviews that turned out to be utterly unsupported. I was disappointed.

For some reason the author has characters engage in frequent conversational name-dropping - a poor substitute for good dialogue and an irritating habit in general.

This novel is basically one passable idea smothered by a parade of forgettable characters, and further doomed by a dull writing style.
Read more
Helpful
Report abuse
See all reviews

Livfoss
4.0 out of 5 stars Very interesting, original and well written. Good translation
Reviewed in the United Kingdom on February 11, 2022
Verified Purchase
While I was reading this version, my wife was reading the book in French, so we were able to discuss the quality of the translation which we found excellent. The story is original (no spoilers here - this is not a proper book review) and contains an element of fantasy which allows the author to explore some original "what if" ideas. There are multiple characters, well realised, who each have to react to the unique situation created by the author. There is a lot of well-researched detail which makes the narrative really interesting. The book needs close attention. I really liked it.
Read more
12 people found this helpful
Report abuse

Heligany
2.0 out of 5 stars Worst ending since LOST
Reviewed in the United Kingdom on January 28, 2022
Verified Purchase
It took ages to establish the characters, too long, and then there was the incident. By this point you could see there werent enough pages left to do the job. And indeed the ending was so rushed it felt wrong.

Overall it was disappointing. Very overhyped.... I dunno what the editors were thinking.... its clear the writer was thinking time to wrap up. it reads like he lost interest!
Read more
8 people found this helpful
Report abuse

Amazon Customer
3.0 out of 5 stars Overhyped
Reviewed in the United Kingdom on February 9, 2022
Verified Purchase
There is a lot of hype around this which is really not warranted in my opinion - congrats to the marketing department! 🤣

The story is okay - the central idea is a rehash of existing ideas rather than anything strikingly new, and was very nearly a disappointment after a lengthy build-up...but the combination was cleverly put together and the second act in particular made for an interesting read. I felt the third act lost all momentum and was a bit of an effort to get through. On balance, I wouldn't recommend it.
Read more
7 people found this helpful
Report abuse

P. G. Harris
5.0 out of 5 stars That’s great, it starts with an earthquake, birds and snakes, an aeroplane…
Reviewed in the United Kingdom on March 3, 2022
Verified Purchase
The Anomaly is tremendous fun. It doesn’t reach the heights if the greatest science fiction, but it is original, entertaining and enjoyable while it lasts.

It starts with chapters dedicated to a series of characters with nothing in common except they experienced turbulence while on a transatlantic flight. They include a ruthless hitman who lives a double life as the owner of a vegetarian catering business, a troubled author, a hot shot lawyer working for a questionable business, a disturbed veteran of overseas wars, a gay rapper, a film editor in a decaying relationship with an older architect, a terminally ill pilot. We are also introduced to two geeky mathematicians, Adrian and Meredith, circling around each other on the edge of a relationship.

Author Hervé le Tellier has fun while setting up his characters, while also allowing some more serious and darker currents to flow. He uses the troubled author to show the ridiculous pretentious side of the French literary establishment. While geeky mathematicians might seem a relatively easy target, treats them with affection, and, indeed, Adrian and Meredith’s first reactions to each other are an absolute delight. I also have to say, I never though I’d care so much about the fate of a pet frog. On the dark side, there is the cold blooded assassin, questions about corporate morality, homophobia in the world of hip hop, and a disturbing section about child abuse.

All of the stories are brought together in the central concept of the book (pre-publicised in the blurb, so no spoilers here), when a plane carrying the characters (excluding our mathematicians) flies out of a storm on its way to land in the US. The problem is that the same plane, with the same crew and passengers landed 106 days previously and all on board have since carried on living their lives for three months.

The rest of the book is then concerned with the questions of what the authorities will do to deal with the situation, how the individuals will react to meeting themselves, and what caused the anomaly in the first place. The authorities range from a statesmen like Macron, to an unnamed but obviously second term Trump, who is portrayed as an idiot out of his depth rather than a malicious nationalist, and a predictably secretive Chinese government.

The greatest weight is given to the individual stories which explore a range of responses, how does a secretive killer react to having himself around? How do those in relationships deal with the inevitable jealousy? How do the extra three months of those on the original plane alter the situation? Can mistakes be corrected with the extra knowledge?

In terms of the wider picture, three possible explanations for the duplication of the plane are explored, although the “true one” is quickly evident. It is here that I had my one major quibble with the book. Le Tellier’s choice to concentrate mainly on the individual tales left me feeling slightly dissatisfied. Not fully exploring the wider implications (even though the explanation is fundamental to the denouement) leaves the book, to my mind, with a bit of an unfulfilling vacuum. Also while I am at it, I didn’t really see the point of the child abuse storyline, there is no depth to it, which makes it seem rather exploitative.

However, overall, if one accepts Le Tellier’s choices and takes the Anomaly for what it is, a flashy, fast paced thriller based on a highly original premise, it certainly delivers. Coming soon to a cinema near you (I would expect).
Read more
4 people found this helpful
Report abuse

Norman Housley
3.0 out of 5 stars Clever but forgettable ‘what if’ novel
Reviewed in the United Kingdom on June 1, 2022
Verified Purchase
Surely a million-copy bestseller that also won France’s leading literary prize must be a very special sort of book? Well, in terms of scientific ideas that might be the case, but not as a novel; there is simply not enough character development. Le Tellier starts by introducing a varied collection of people who get caught up in events, rather like a 70s disaster movie. He then tells us how ‘the anomaly’ is dealt with by the world’s authorities, which is fairly interesting and at times funny. And in the third and strongest part of his book, he demonstrates the impact of the eponymous ‘anomaly’ on his selected individuals. This section is well managed, though laboured at times, especially in the tedious Colbert show sequence. The main problem is that while the book offers an entertaining read - and will surely generate a blockbuster movie - it is not emotionally engaging in the least. Kudos to the translator Adriana Hunter, who had to cope with some highly technical passages (religious as well as scientific) and did her job so well that this does not read like a translation.
Read more
One person found this helpful
Report abuse
See all reviews