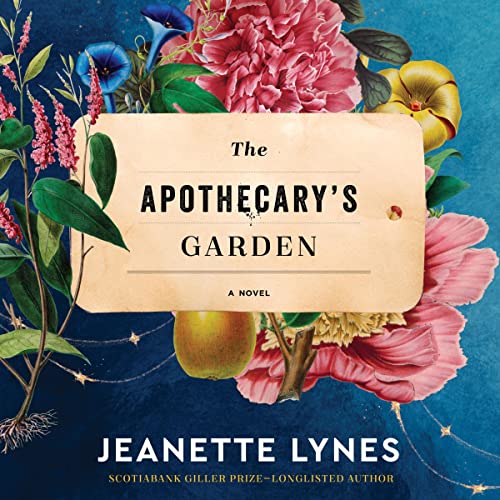 The Apothecary's Garden: A Novel

Belleville, 1860: Lavender Fitch is a twenty-eight-year-old spinster whose station in life is greatly diminished after the death of her father, the local apothecary. Her only inheritance is the family house and its extensive gardens. To make ends meet, Lavender resorts to selling flowers at the local market.

One day, a glamorous couple step off the train at the railway station. The lady is famed spirit medium Allegra Trout, who has arrived for a public show of her skills. With her striking beauty and otherworldly charms, Allegra casts a spell over Belleville from the moment she arrives. Her handsome but disfigured assistant, Robert, singles out Lavender as he makes his way through the crowded station. To her surprise, he buys her entire cart of flowers.

The arrival of the legendary medium is well-timed. Lavender has been searching for a secret cache of money and can make use of Allegra’s powers to contact her dead mother for clues to its location. As the Trouts remain in town, preparing an encore presentation of their mystical extravaganza, Robert and Lavender begin to grow close.

While the town’s anticipation for Allegra’s final show begins to mount, so do Lavender’s questions. Will the spirits make contact with the living, or is Allegra a fraud? Is Robert really Allegra’s brother, or is something else going on? Will Robert and Lavender’s relationship continue to blossom, or will it collapse under the weight of deception? Will Lavender find the money left by her mother, or will she be forced from her home and her beloved garden?

Our best offer yet
Get 3 months free!
Limited time offer. Get started
Learn more about membership
List Price: $40.01
You Save: $5.00 (12%)
By completing your purchase, you agree to Audible's Conditions Of Use and Amazon's Privacy Notice. Tax where applicable.
Sold and delivered by Audible, an Amazon company
Share

4.2 out of 5 stars
4.2 out of 5
22 global ratings
How are ratings calculated?
To calculate the overall star rating and percentage breakdown by star, we don’t use a simple average. Instead, our system considers things like how recent a review is and if the reviewer bought the item on Amazon. It also analyzes reviews to verify trustworthiness.
Top reviews

M Cowman
5.0 out of 5 stars A Great Read
Reviewed in Canada on July 22, 2022
Verified Purchase
The Apothecary's Garden is a wonderful tale of romance and mysticism set in the mid-eighteen hundreds. Spiritualism was becoming popular as religion had stopped being a comfort for many people when losing their loved ones. Mediums using Tarot cards, Ouija boards, and seances claimed to communicate with the dead. It was also a time of great interest in the medicinal potential of plants. People used roots and herbs to treat everything from toothaches to dissipation. Local chemists and apothecaries frequently grew their own. In a sense, historical novelists are mediums. They attempt to create the illusion of bringing the past back to life. When written well, their books aren't museums, they are re-enactments. Through her mastery of imagery and description, Jeanette Lynes is extremely good at this. Before the end of the first chapter, the mid-nineteenth-century world of Belleville, Ontario, Canada, and of orphaned flower pedlar Lavender Fitch, is established and irresistible, and I was drawn completely into it.
Read more
One person found this helpful
Helpful
Report abuse

Kindle Customer
5.0 out of 5 stars Enchanting
Reviewed in Canada on July 10, 2022
Verified Purchase
Plants, flowers, remedies, mystery, fashion, interest, desire. All rolled into one. I live in Belleville, and it is fun to read a story set in my city.
Read more
One person found this helpful
Helpful
Report abuse

Chels
3.0 out of 5 stars Well written but plot is slightly dull
Reviewed in Canada on September 25, 2022
Verified Purchase
It’s fine, I quite enjoy the details in the writing, but the plot itself feels slow and overall uneventful.
Read more
Helpful
Report abuse

canadianreader
4.0 out of 5 stars Canadian history written by a Canadian author
Reviewed in Canada on June 28, 2022
“Your flowers steal my breath away, Miss Fitch!”

Immediately readers will be swept back in time to Belleville, Ontario in the 1860s. The rich atmosphere and sense of place and time will astonish you. Lavender Fitch, 28, takes her cart, ‘Beauteous Botanics’, daily to the train station selling her healing flowers and posies, hoping to make enough money to support her and her orphan charge, 15-year-old Arlo Snook. Before her death, Lavender’s mother hid a nest egg to secure Lavender’s future, but it’s yet to be found! In the meantime, Lavender and Arlo endure a leaking roof and a meager sustenance.

When a famous oracle and her partner come to town, everything changes for Lavender.

I was fascinated with the portrayal of rural Canadian life in the 19th century, the language of flowers and the hints of magic! Lynes explores the definition of family and will leave you anxious to do some gardening yourself. The characters, like the setting, were expertly crafted and I loved that the ‘light’ was contagious, smiling as one good turn fostered another.

I was thankful for an opportunity to read a book by a Canadian author and learn more about early life in my country.

I was gifted this advance copy by Jeanette Lynes, HarperCollins Canada, HarperAvenue and NetGalley and was under no obligation to provide a review.
Read more
2 people found this helpful
Helpful
Report abuse

ShopMama
5.0 out of 5 stars "We All Need Some Light"
Reviewed in Canada on July 15, 2022
The Apothecary's Garden couldn't have come at a better time, when worrisome, controversial world events of all kinds seem to wear the psyche down on a daily basis. This breathtaking book is balm to the soul. Enveloped in the author's tenderness, depth and compassion for human struggle, I couldn't put it down, lapping up the poetic narrative found on the pages to which I was glued. On each one of them I found a rich rainbow of emotion, my heart stirred as much by the joyful and beautiful moments woven into the familiar pangs of humility that human struggle delivers so predictably, if not seemingly conspiratorially.

Passages exist here that feel destined to be quoted in the future as part of our era's literary classics. I found myself needing to pause to reread many of them to savor their structure and emotional capacity. "Oh life...Always more words than minutes to convey them." And the simple process of cutting flowers from one's garden depicted with plaintive profundity, "The truth was, cutting her flowers saddened her deeply. The instant her secateurs sliced those green stems, their death began. And she was the executioner. Their screams reached her as she severed them from their earthen home...She'd never wanted to be an executioner, only an apostle of beauty. But she had to eat. She had to live. She needed to sell her beloved blooms."

This figurative passage illustrates the power The Apothecary's Garden had uplifting my own weathered mind, "She'd not basked in a dream bubble for ages, but she recognized the feeling at once - a sensation like no other, when the veil of the everyday peeled away and something else opened up. A layer beyond. The feeling of her troubles retreating was as wondrous as a rose rising from the snow."

The Apothecary's Garden is a pristine and abundant Eden for the reader's heart, soul and mind. Thank you, Jeanette Lynes, for this welcome and eloquent escape - a place of soulful refuge and renewal!
Read more
2 people found this helpful
Helpful
Report abuse

Barbara Langhorst
5.0 out of 5 stars Sumptuous Mystery
Reviewed in Canada on July 12, 2022
Jeanette Lynes takes us into another world, one where the characters are as rich and sumptuous as the flowers, the privations as keenly felt as the elation, and the world is as vibrant in winter as in the height of summer. I have loved all of Lynes' novels, but this one is the best yet. The Apothecary's Garden is a triumph and a delight!
Read more
2 people found this helpful
Helpful
Report abuse

Marie
5.0 out of 5 stars A perfect summer read
Reviewed in Canada on July 3, 2022
A love story that sweeps you away with beautiful prose & characters who come alive on the page. The perfect summertime read. Loved it.
Read more
One person found this helpful
Helpful
Report abuse
See all reviews