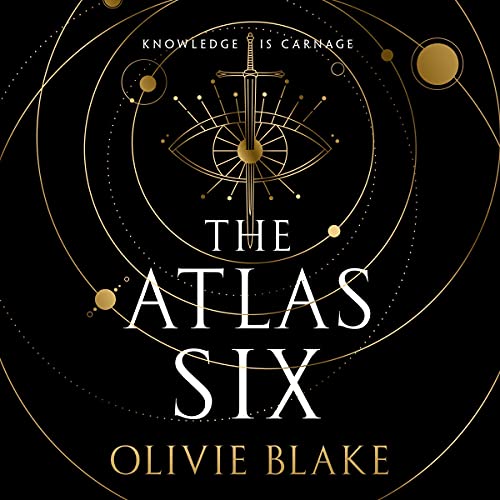 Olivie Blake (Author), Macmillan Audio (Publisher)
4.4 out of 5 stars 763 ratings
See all formats and editions
Sorry, there was a problem loading this page. Try again.

The Alexandrian Society, caretakers of lost knowledge from the greatest civilizations of antiquity, are the foremost secret society of magical academicians in the world. Those who earn a place among the Alexandrians will secure a life of wealth, power, and prestige beyond their wildest dreams, and each decade, only the six most uniquely talented magicians are selected to be considered for initiation.

Enter the latest round of six: Libby Rhodes and Nico de Varona, unwilling halves of an unfathomable whole, who exert uncanny control over every element of physicality. Reina Mori, a naturalist, who can intuit the language of life itself. Parisa Kamali, a telepath who can traverse the depths of the subconscious, navigating worlds inside the human mind. Callum Nova, an empath easily mistaken for a manipulative illusionist, who can influence the intimate workings of a person’s inner self. Finally, there is Tristan Caine, who can see through illusions to a new structure of reality - an ability so rare that neither he nor his peers can fully grasp its implications.

When the candidates are recruited by the mysterious Atlas Blakely, they are told they will have one year to qualify for initiation, during which time they will be permitted preliminary access to the Society’s archives and judged based on their contributions to various subjects of impossibility: time and space, luck and thought, life and death. Five, they are told, will be initiated. One will be eliminated. The six potential initiates will fight to survive the next year of their lives, and if they can prove themselves to be the best among their rivals, most of them will.

You won't be charged until release day

By completing your purchase, you agree to Audible's Conditions Of Use and Amazon's Privacy Notice. Tax where applicable.
Sold and delivered by Audible, an Amazon company
Share

Shapi Rashidi
5.0 out of 5 stars better than a TON of popular NA novels
Reviewed in Canada on June 24, 2021
Verified Purchase
I can't express how good this book is! It got me out of a year-long reading slump and that's not an easy thing to do. Blake's characters are so so so good, and she does an amazing job with diverse representation; I've never come across a Persian character in any form of media before, so to see myself represented in a book that has quickly become my favourite of all time is truly amazing. The story is also *chef's kiss*, the writing is some of the best out there in the new adult genre, and I can't wait for the second book!
Read more
2 people found this helpful
Helpful
Report abuse

Pearl de la Fuente
5.0 out of 5 stars Everyone NEEDS to read this!!!
Reviewed in Canada on August 5, 2021
Verified Purchase
A phenomenal read. Just absolutely mind blowing how great this book is truly. The plot, the characters (great diversity and representation), the language, and the complexity of it all was just so satisfying. I've never read a book quite like this one!!! The plot twist was wonderfully executed and I just adored how each event, mentions, and characters were all significant (whether large or small) to the plot. This book constantly proved my expectations wrong which made it all the more entertaining and engaging. PLEASE PLEASE do not gate-keep this wonderful masterpiece!!!
Read more
2 people found this helpful
Helpful
Report abuse

Monica Corsetti
5.0 out of 5 stars Fair Warning
Reviewed in Canada on July 17, 2021
Verified Purchase
This book is AMAZING....but ends on the worlds steepest cliff hanger. Be warned, this is a must read for anyone who loves modern fantasy, and the author does an amazing job with world formation (though it can be a little dense at times), but it will absolutely leave you dying to know what the heck is going on. I squealed, screamed, and audibly gasped while reading this book, and I will be keeping a very close eye out for the second instalment.
Read more
One person found this helpful
Helpful
Report abuse
See all reviews

Beth
2.0 out of 5 stars Deceiving summary
Reviewed in the United Kingdom on June 28, 2021
Verified Purchase
This is one of the books where the summary deceives. Ok, we have a group of 6 people who are fighting for a position as caretakers in x place, but the characters themselves are all so uninteresting. Maybe Libby was the one i enjoyed the most, but even her, not that much. If Nico and Libby relationship was written differently, maybe i would have liked them a lot more, but they were written verbally bullying each other almost throughout the book. Parisa, Tristan and Callum are horrible characters, superficial and i did not see the point in keeping them on the story for so long. Atlas and Dalton were also uninteresting characters for me. And the writing itself, some words, some paragraphs were difficult to understand and hard to get into the real meaning of the narrative. Some of them i had to read more than once to understand the meaning behind the words, they were philosophical and hard to understand. not interested in the second book
Read more
3 people found this helpful
Report abuse

Amazon Customer
2.0 out of 5 stars Overhyped and meandering
Reviewed in the United Kingdom on July 10, 2021
Verified Purchase
Based on the growing hype and exciting premise of this book – 6 magicians with unclear motivations reluctant to cooperate; secret societies; a mysterious library; ‘dark academia with a twist’ – I was convinced this would be my jam. And it actually started off pretty well, I was mostly enjoying the lack of story for the first 35-40% of the book but before the midpoint, it started to drag and be a bit too deliberately *edgy* for my liking. It took me weeks to finish because I could only read about 30 pages a day without getting tired of it, but I was curious enough about where it was all going to continue reading.

Let me give credit where it’s due – I applaud Ms Blake for what she was trying to do, she’s throwing out and trying to incorporate some huge concepts and ideas into a unique story but unfortunately, I wasn’t convinced by her execution.

I tend to enjoy reading about morally grey characters, but I didn’t root for or gravitate towards anyone in particular in this book, and neither was I invested in the numerous Dramione reinterpretations, I mean character relationships or dynamics, varied as they were. The traits which made the characters intriguing at the beginning were downplayed when they talked and acted like edgy teenagers. Now, I like my fair share of edgy teenage characters but this novel presents itself as a much more eloquent story with mature characters. I know a certain level of pretentiousness is to be expected in a dark academia novel but my god, the navel-gazing, philosophical musings and vague remarks about the mysteries of life, reality, desire, time and space grated on my nerves. I didn't feel like they were incorporated smoothly at all because they ended up coming off as grand but hollow statements. Over the top, bloated dialogue in which characters answer questions with another question tended to either lead nowhere and reveal very little, be exposition heavy or, most frequently, unsuccessfully attempt to heighten tension and create emotions between characters where I felt none.

I was also frustrated and confused by the very vague and yet oddly specific science based magic system which had no rules for the reader to follow and was conveniently utilised as the plot required it. It all somehow manages to make the book too underdeveloped and overdeveloped at the same time.

Another problem I had is that for a story set in a sinister, academic setting, this novel completely lacked any tangible atmosphere associated with the trope and I think that can be mainly blamed on the shallow characterisation, lack of high stakes and the baffling magic system.

There is an interesting twist at the end but by then it was too late to keep me hooked. As my enjoyment of this book continually dwindled down, I will most likely not continue with the series.

Hopefully I’ll have better luck with Olivie’s other books which sound unique and promising enough to make me want to give them a go, even though I ended up mostly disliking this one.

Kindle Customer
2.0 out of 5 stars Tiktok recommended
Reviewed in the United Kingdom on June 4, 2021
Verified Purchase
Saw this book recommended as a mind blowing fantasy thriller, on Tiktok. Not really that impressed. Could see the "twist" coming from miles away, and the characters are all fairly awful people. She was right about the art work though. That was cool. Won't be reading the next one though. Really not interesting enough.
Read more
3 people found this helpful
Report abuse

Lola Eva Danan
5.0 out of 5 stars The most brilliant, immersive, magic-made-real book i've ever read!
Reviewed in the United Kingdom on October 20, 2020
Verified Purchase
I wasn't sure what to expect with this book, but just by reading the description I knew it was worth a try. What I was thoroughly unprepared for was how utterly brilliant Olivie Blakes style of writing is. You become so emotionally invested in each character, their flaws and their hopes and desires. Not to mention the subtle but immersive world-building that leaves you wishing the modern world was tinged with magic the same way it is in this book. I kept having to put it down and occupy myself with something else for fear of devouring it too quickly. To say I can't wait for the sequel is and understatement. Do yourself a favor and buy this immediately! Her other books are brilliant as well, so if you feel a bit of a book hangover like I did after finishing The Atlas Six, try Masters of Death!
Read more
4 people found this helpful
Report abuse

Kim Banks
5.0 out of 5 stars Just extraordinary
Reviewed in the United Kingdom on February 17, 2021
Verified Purchase
This is the first book by Olivie Blake that I have read thus far and it is an understatement to say I have been missing out. The sheer imagination in this story alongside her unique writing style made this not only completely immersive, but made you feel as if you were meeting each character and living this story for real. I feel as if you could read this one hundred times and still pick up on or discover something new with each read. The characters are all unique but provoke a multitude of emotions toward them, from fear, to empathy and so on. The ending was totally not what I was expecting but was so cleverly written in its reveal. I couldn't possibly recommend this book enough!
Read more
3 people found this helpful
Report abuse
See all reviews
Back to top
Get to Know Us
Make Money with Us
Amazon Payment Products
Let Us Help You
EnglishChoose a language for shopping. CanadaChoose a country/region for shopping.
© 2008-2021, Amazon.com, Inc. or its affiliates