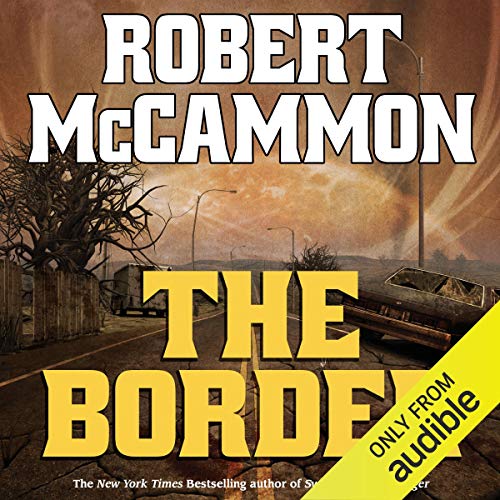 World Fantasy Award-winning, best-selling author Robert McCammon makes a triumphant return to the epic horror and apocalyptic tone reminiscent of his books Swan Song and Stinger in this gripping new novel, The Border, a saga of an Earth devastated by a war between two marauding alien civilizations.

But it is not just the living ships of the monstrous Gorgons or the motion-blurred shock troops of the armored Cyphers that endanger the holdouts in the human bastion of Panther Ridge. The world itself has turned against the handful of survivors, as one by one they succumb to despair and suicide or, even worse, are transformed by otherworldly pollution into hideous Gray Men, cannibalistic mutants driven by insatiable hunger. Into these desperate circumstances comes an amnesiac teenaged boy who names himself Ethan - a boy who must overcome mistrust and suspicion to master unknowable powers that may prove to be the last hope for humanity's salvation. Those same powers make Ethan a threat to the warring aliens, long used to fearing only each other, and thrust him and his comrades into ever more perilous circumstances.

A major new novel from the unparalleled imagination of Robert McCammon, this dark epic of survival will both thrill listeners and make them fall in love with his work all over again.

4.3 out of 5 stars
4.3 out of 5
815 global ratings
How are ratings calculated?
To calculate the overall star rating and percentage breakdown by star, we don’t use a simple average. Instead, our system considers things like how recent a review is and if the reviewer bought the item on Amazon. It also analyzes reviews to verify trustworthiness.

Old_Cat
4.0 out of 5 stars Good read
Reviewed in Canada 🇨🇦 on January 18, 2023
Verified Purchase
I have only two issues with this one! 1) Too talky sometimes, suffers from over description! 2) Calls Magazines, clips! Very unknowledgeable about firearms! Other than this I love this mans writing!
Read more
Helpful
Report abuse

mredeye
4.0 out of 5 stars Very Imaginative!
Reviewed in Canada 🇨🇦 on October 18, 2022
Verified Purchase
I found this to be rather lengthy altho' very imaginative in picturing other vivid worlds. The characters were on the violent side and the villains were weird. The scenes described were fantastic and very moving in line with the different worlds thru which the main characters journeyed thru. The ending was not what I had hoped for and I was disappointed with the novel.
Read more
Helpful
Report abuse

Tom Siklosi
5.0 out of 5 stars McCammom never ceases to amaze!
Reviewed in Canada 🇨🇦 on December 8, 2017
Verified Purchase
After reading many of Robert McCammom's books in the 80's and 90's such as Swan Song, (my personal favorite, resd at least 6 - 8 times since first written), Stinger, Ushers Passing, Boys Life, Gone South, etc., I took a break from Mr. McCammom's work to pursue other interests. After reading The Border, I find myself once again wanting to read anything written by this insightful, thought provoking and heart pounding author!
Read more
Helpful
Report abuse

Kindle Customer
4.0 out of 5 stars The end of the world
Reviewed in Canada 🇨🇦 on April 21, 2018
Verified Purchase
Mr. McCammon has again taken a often told story about alien invasion and turned it into a page turner. Great characters, many twists and lots of action.
Read more
Helpful
Report abuse

Bill Muise
4.0 out of 5 stars A very good read
Reviewed in Canada 🇨🇦 on March 7, 2016
Verified Purchase
Reminiscent of Swan Song, my favorite book of all time. Reminiscent perhaps because of Robert's style of creating believable characters, ones that you can bond with. It would have been a five star but the ending seemed a little rushed. A good ending just rushed.
Read more
One person found this helpful
Helpful
Report abuse

LBM
VINE VOICE
4.0 out of 5 stars this is a terrific read.
Reviewed in Canada 🇨🇦 on June 28, 2015
Verified Purchase
I am a huge fan of McCammon's "colonial" mysteries, but even his books set in the here and now are enjoyable. I thought the zombie-like "Gray Men" angle was superfluous but other than that, this is a terrific read.
Read more
2 people found this helpful
Helpful
Report abuse

Karl Redekopp
4.0 out of 5 stars Excellent read
Reviewed in Canada 🇨🇦 on April 27, 2017
Verified Purchase
I've been a fan of Robert ever since I read his novel Swan Song.....this novel reminded me of that book. Definitely worth the read!!
Read more
Helpful
Report abuse

SRevoy
4.0 out of 5 stars Vintage McCammon With Lots Of New Twists
Reviewed in Canada 🇨🇦 on July 14, 2015
Verified Purchase
Excellent read vintage McCammon with lots of interesting characters and a plot that just hums along. Reminded me of Boys Life in its spirit.
Read more
One person found this helpful
Helpful
Report abuse
See all reviews

Ibbi
4.0 out of 5 stars Superb original and terrifying variation on a theme - spoiled by being too short, lacking depth and a quick rushed ending
Reviewed in the United Kingdom 🇬🇧 on September 11, 2015
Verified Purchase
Robert McCammon (when did he drop the 'R' middle initial?) is one of my favourite authors, having written one of my favourite books: Swan Song, along with many other superb novels including Speaks The Nightbird.

He is a master at story telling and he is one of the only authors I have read who manages to terrify and shock with his amazing vision, description and imagination enabling you to recoil in horror at what he describes and evokes. Great great characters and the plot itself was highly original and exciting.

The Border is a brilliantly written book, very original and completely mad variant on the Apocalyptic and Aliens invading Earth theme and the story unfolds and powers along leaving you breathless - utterly brilliant (and it is NOT predictable in the slightest)...apart from the Ending - Rushed and abrupt and very unsatisfying leaving me feeling short changed and frustrated as there was so so much I wanted to know about things (you'll know what when you read it) .
There wasn't enough character development, and the whole overlying plot and factions and factors weren't fleshed out satisfyingly as in Swan Song and his other books - this book has so so much potential - enough to have turned this into a true Great.
The novel is also very short compared to his others and lacks the depth and detail his others have - hence the 4 rather than 5 stars.

If he had spent more time on it, and worked at it longer, giving the reader more to digest and know then this would have been be a Masterpiece.

B'Gad
1.0 out of 5 stars A Thirteen year olds view of aliens
Reviewed in the United Kingdom 🇬🇧 on May 23, 2020
Verified Purchase
I was encouraged by the many 5 star reviews, and being a big fan of science fiction (Ian Banks etc) I thought I'd give this a go.
What a tremendous disappointment:
His description of characters is incredibly superficial, but in a massively over written manner. He spends a page describing the face of a character, but you know nothing, absolutely nothing about them apart from that they have "deeply wrinkled eyes" along with a million other completely irrelevant details.
His description of the martial abilities of the main character Ethan is utterly, utterly hopeless.... to the point of being embarrassing. I literally cringed when I read them.
Finally, and only because I don't have all day, he didn't just "jump the shark", but invented a whole shoal of them and leapt back and forward.
In a word, the book is...... Infantile.
Read more
One person found this helpful
Report abuse

M. King
2.0 out of 5 stars Not his best
Reviewed in the United Kingdom 🇬🇧 on June 27, 2018
Verified Purchase
It’s a decent enough story but I felt the characters were not that well fleshed, especially Jericho.

Could have done as well with some pauses to reflect on the implications for the likes of Ethan at certain key stages; it all felt a bit rushed.

Then we have an unfortunate ending which is a standard trope in a lot of sci-fi shows and which is rushed in at warp speed to get the book over with in a very perfunctory manner.
Read more
One person found this helpful
Report abuse

Amazon Customer
5.0 out of 5 stars Great read
Reviewed in the United Kingdom 🇬🇧 on November 3, 2020
Verified Purchase
Thoroughly enjoyed this. Enthralling, thought provoking story. I did think there could’ve been more made of finding the ‘solution’ to ending the war...it seemed quick compared to the beginning of the story... maybe that’s because I didn’t want it to end
Read more
Report abuse