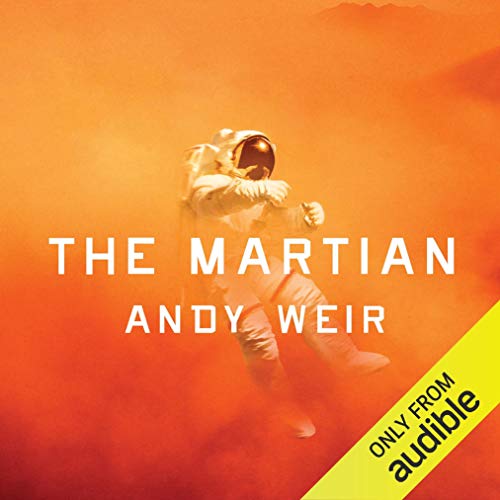 List Price: $43.80
You Save: $5.47 (12%)
By completing your purchase, you agree to Audible's Conditions Of Use and Amazon's Privacy Notice. Tax where applicable.
Sold and delivered by Audible, an Amazon company
Share

Iset
4.0 out of 5 stars Is it funny? Yes
Reviewed in the United Kingdom on November 6, 2016
Verified Purchase
Having just come off the back of watching the film, I’ve done what everyone else has no doubt been doing, and read the book. Is it entertaining? Yes. Is it funny? Yes. Is it amazing writing? Well… no.

The book and is carried on the witticisms and banter of main character Mark Watney, the titular Martian, and are jam-packed with pop culture references, science-y bits, and one-line zingers. And whilst I appreciated them, even found them amusing, this is also the story’s downfall. It sounds like the kind of dialogue I’d exchange with my equally nerdy friends on a Saturday night meet up – not Apollo 13 on Mars as it was billed to me by the hype. As a result it feels like it’s missing a sense of epic scale, and the stakes just don’t feel that high. At no point did I ever feel awed, or gripped, or really worried for Watney. Whenever something went wrong I simply wondered how he was going to fix it this time and what amusing commentary he’d provide. I never worried for a minute about his ultimate survival. Fun and entertaining? Yes. Compelling and thrilling? No.

The writing is competent, not outstanding. Apart from the complicated science-y bits, the language is kept simple, which is good for accessibility of the average reader, but for me I felt it lacked a little bit of creative flair – the language is very functional and to the point, there’s very little evocative imagery or creative description. The characters are largely functional too. Outside of Watney, everyone else basically boils down to their job at NASA or their role (e.g. Mark’s parents, Vogel’s wife, etc.). Watney himself is interchangeable – his vital stats could be swapped out for someone older/younger male/female American/non-American and there be no difference whatsoever to what happens in the plot.

Would I recommend this book? Yes, I would. It’s amusing, it’s entertaining, it’s interesting – it’s just not the most amazing, earth-shattering book ever written, so don’t go into it expecting that. It reminds me a lot of an old classic actually – The Moon Is Hell by John Campbell – in its diary format and its functional problem-solving (minus the crime solving that also goes on in Campbell’s novel).
Read more
15 people found this helpful
Report abuse

David P
5.0 out of 5 stars Seen the film, but still really enjoyed the book
Reviewed in the United Kingdom on November 9, 2020
Verified Purchase
I read Artemis recently, and found it very good. I then saw that this was by the same author. I really enjoyed the film, and I really liked the style of writing in Artemis, so I gave this a go. Even though I know how it turns out, I really enjoyed the book, it manages to describe very technical issues without seeming to get bogged down in nerdy details, and really conveys the situation brilliantly. The way that such large pieces of the book are merely the stranded man's thoughts with no interaction or dialogue with other people, and yet remain so engaging, is really clever. I will be seeking out other books by this author now.
Read more
2 people found this helpful
Report abuse
See all reviews
Back to top
Get to Know Us
Make Money with Us
Amazon Payment Products
Let Us Help You
EnglishChoose a language for shopping. CanadaChoose a country/region for shopping.
© 2008-2021, Amazon.com, Inc. or its affiliates