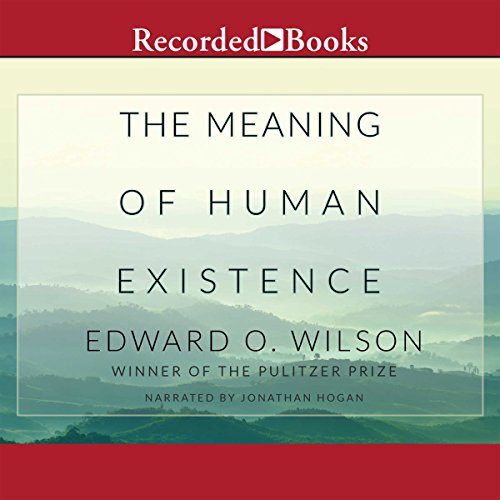 The Meaning of Human Existence

Searching for meaning in what Nietzsche once called “the rainbow colors” around the outer edges of knowledge and imagination, Edward O. Wilson bridges science and philosophy to create a 21st century treatise on human existence. Once criticized for his over-reliance on genetics, Wilson unfurls here his most expansive and advanced theories on human behavior, recognizing that, even though the human and spider evolved similarly, the poet’s sonnet is wholly different than the spider’s web. Whether attempting to explicate "the Riddle of the Human Species", warning of "the Collapse of Biodiversity", or even creating a plausible "Portrait of E.T.", Wilson does indeed believe that humanity holds a special position in the known universe. Alarmed, however, that we are about to abandon natural selection by redesigning biology and human nature as we wish them, Wilson concludes that advances in science and technology bring us our greatest moral dilemma since God stayed the hand of Abraham. Edward O. Wilson is widely recognized as one of the world’s leading scientists. He is the winner of the Pulitzer Prize and the author of the best-selling The Social Conquest of Earth and Letters to a Young Scientist.

Read more
©2014 Edward O. Wilson (P)2014 Recorded Books
Previous page
Next page
Learn more about membership
List Price: $27.77
You Save: $3.47 (12%)
By completing your purchase, you agree to Audible's Conditions Of Use and Amazon's Privacy Notice. Tax where applicable.
Sold and delivered by Audible, an Amazon company
Share

4.4 out of 5 stars
4.4 out of 5
543 global ratings
How are ratings calculated?
To calculate the overall star rating and percentage breakdown by star, we don’t use a simple average. Instead, our system considers things like how recent a review is and if the reviewer bought the item on Amazon. It also analyzes reviews to verify trustworthiness.
Top reviews

ronbc
4.0 out of 5 stars Good ideas, but a bit of a repeat of earlier books
Reviewed in Canada on October 13, 2014
Verified Purchase
If you’ve read both Consilience and The Social Conquest of Earth, you won’t find many new ideas in Wilson’s latest collection of essays. But you will find them expressed in new, more compact, and perhaps more accessible ways.

Like Consilience, The Meaning of Human Existence argues strongly that the humanities need science (in order to have something real about which to speak) and science needs the humanities (to offer some sort of human meaning to external reality).

Wilson makes both of these claims in an entirely material context. Early in the book, he states as clearly as he can that he rejects any supernatural explanation of the human story:

Humanity, I argue, arose entirely on its own through an accumulated series of events
during evolution. We are not predestined to reach any goal, nor are we answerable to
any power but our own. Only wisdom based on self-understanding, not piety, will save us.
There will be no redemption or second chance vouchsafed to us from above. We have only
this one planet to inhabit and this one meaning to unfold.

And the “one meaning” that we “unfold” has a central truth, an understanding of human nature that addresses both competition and cooperation:

We are all genetic chimeras, at once saints and sinners, champions of the truth and hypocrites—
not because humanity has failed to reach some foreordained religious or ideological ideal, but
because of the way our species originated across millions of years of biological evolution.

(Interestingly, I have also just finished reading British philosopher John Gray’s new book, The Silence of Animals: On Progress and Other Modern Myths. Famously skeptical, Gray makes the same core point, again and again, as he examines the writings of modern writers and thinkers. A separate review of Gray’s book is posted here.)

Wilson mixes the humanities and the sciences when he provocatively characterizes the competition of individual selection as “sin” and the cooperation of group selection as “virtue.” Science labours to show us what we are, and the humanities strive to suggest what that means to us. But unlike religious struggles, there is no ultimate winner. Were either impulse to win entirely, Wilson warns, our civilization would perish:

So it came to pass that humans are forever conflicted by their prehistory of multilevel
selection. They are suspended in unstable and constantly changing positions between
the two extreme forces that created us. We are unlikely to yield completely to either force
as the ideal solution to our social and political turmoil. To give in completely to the instinctual
urgings born from individual selection would be to dissolve society. … At the opposite extreme,
to surrender to the urgings from group selection would turn us into angelic robots—the outsized
equivalents of ants.

How to understand, how to live with our duality? How to comprehend its indelible roots in our biological origins? How to relate something so vast and so impersonal to our own experience of our own lives?

Unfortunately, Wilson delays the final answers to these questions for the great bulk of the rest of the book, during which he refights the long-running scientific argument about inclusive fitness (kin selection), group selection, and multilevel selection. If you’re familiar with this controversy, you can give this long recapitulation a quick skim, or even a skip altogether.

Near the end of the book, Wilson summarily reiterates the different roles of the humanities and the sciences. But by now, we appreciate that he’s not elevating one over the other. Rather, he’s highlighting their very different functions as the elaborators of our existence:

The humanities address in fine detail all the ways human beings relate to one another
and to the environment, the latter including plants and animals of aesthetic and practical
importance. Science addresses everything else. The self-contained worldview of the
humanities describes the human condition—but not why it is the one thing and not another.
The scientific worldview is vastly larger. It encompasses the meaning of human existence—
the general principles of the human condition, where the species fits in the Universe, and
why it exists in the first place.

The Meaning of Human Existence has many well-expressed and provocative passages like this one. If it had even more of them, and less rehashing of old battles, it would be a very good book, indeed.

Esme
5.0 out of 5 stars Interesting read
Reviewed in Canada on October 11, 2015
Verified Purchase
I enjoyed this book and it enhanced my understanding of the evolution of Homo sapiens and the ways in which our current behavior and beliefs can be explained by our early roots. I didn't actually think that it adequately lived up to its title - the meaning of existence - which was an ambitious theme. However I still got a lot out of it.
Read more
Helpful
Report abuse

Stephanie Wyatt
3.0 out of 5 stars Interesting, but no new insights
Reviewed in Canada on November 8, 2014
Verified Purchase
The title promises much, but content fails to offer any new insights. Wilson uses several of his previously published articles as the basis for chapters in this book. Much has been written concerning the scientific view of evolution versus religious creation myths, and the existential reality of the human condition. In my opinion this book adds nothing new to the debate - however, if you are a religious person, this book may inform you of the scientific worldview that you have been unaware of.
Read more
5 people found this helpful
Helpful
Report abuse

Just a great guy
1.0 out of 5 stars A pure waste of my money and of my time! There is only one chapter about the title!!
Reviewed in the United Kingdom on April 1, 2019
Verified Purchase
Only the last chapter covers the title of the book, a title chosen I am sure only to sell the book!

I did buy this book and I regret having wasting my money. The author, no matter his education, is incapable of giving any rational and logical answer that would make sense!

Here is what he says in chapter 15: Alone anda Free in the Universe:
---"We are created not by a supernatural intelligence but by chance and necessity as one species out of millions in Earth's biosphere."
---"We are, it seems, completely alojne." [Oh yes, you would know that!]
---"So, what is the meaning of human existence?
I've suggested that it is the epic of the species." [His pet sujbects! What a stupid conclusion! Not to mention that the entire book cannot prove rationally anything!]
---"Humaninty arose as an accident of evolution, a product of random mutation and natural selection." {Who with a rational and logical brain could make such a stupid claim that is so simplistic?!
I do not deny evolution for humans but I do not see any proof that evolution would have created humans on Earth and that is the big problem.]

More, the author does not mention all the flaws of the theory of evolution; he uses it as if it was a scientific fact when it is far from being a true fact, it is just a theory that has many flaws!
We know that humans and animals and plants have evolved during many millennia, but what we do not know at all is that how we humans came into being? Oh, wait a minute, the author claims to know and, for him, we come from the chimpanzees!!
In fact, according to the author, we would come from inert rocks that were created during the big bang explosion. Another false claim that any rational and logical person with a brain would never accept.

So, who created humans? I have no clues whatsoever but I do know that we were not created from inert rocks after the big bang explosion and we do not come either from chimpanzees! Both stupid ideas the author believes in!!
Read more
2 people found this helpful
Report abuse

marginal
5.0 out of 5 stars An amazing voyage into oneself!
Reviewed in the United Kingdom on February 3, 2020
Verified Purchase
A jewel of a book if you feel it is important to take a grip on the understanding of how homo sapiens came to be the most intelligent, contradictory, dysfunctional and destructive animal roaming planet earth, and how religion plays a dangerous role as the root of tribal behaviour and source of superstitious, irrational, and anti-scientific thinking.
Read more
2 people found this helpful
Report abuse

Simon Chu
3.0 out of 5 stars Three Stars
Reviewed in the United Kingdom on February 25, 2017
Verified Purchase
Nothing much revealing
Read more
Report abuse

Richard Wilson
5.0 out of 5 stars Five Stars
Reviewed in the United Kingdom on July 24, 2016
Verified Purchase
Enjoyable quick read.
Read more
Report abuse
See all reviews
Back to top
Get to Know Us
Make Money with Us
Amazon Payment Products
Let Us Help You
EnglishChoose a language for shopping. CanadaChoose a country/region for shopping.
© 1996-2022, Amazon.com, Inc. or its affiliates