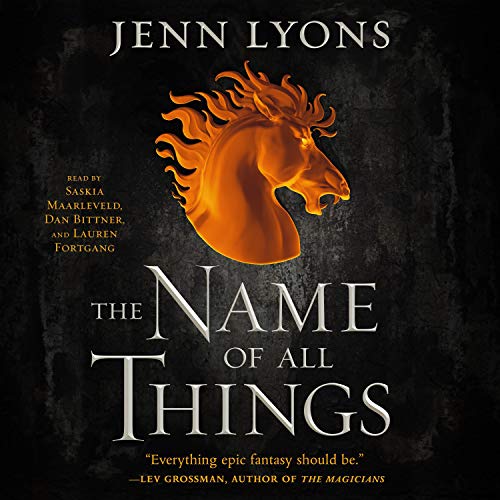 The Name of All Things

"Everything epic fantasy should be: rich, cruel, gorgeous, brilliant, enthralling and deeply, deeply satisfying. I loved it." (Lev Grossman on The Ruin of Kings)

Kihrin D'Mon is a wanted man.

Since he destroyed the Stone of Shackles and set demons free across Quur, he has been on the run from the wrath of an entire empire. His attempt to escape brings him into the path of Janel Theranon, a mysterious Joratese woman who claims to know Kihrin.

Janel's plea for help pits Kihrin against all manner of dangers: a secret rebellion, a dragon capable of destroying an entire city, and Kihrin's old enemy, the wizard Relos Var.

Janel believes that Relos Var possesses one of the most powerful artifacts in the world - the Cornerstone called the Name of All Things. And if Janel is right, then there may be nothing in the world that can stop Relos Var from getting what he wants.

And what he wants is Kihrin D'Mon.

Jenn Lyons continues the Chorus of Dragons series with The Name of All Things, the epic sequel to The Ruin of Kings

A Chorus of Dragons
1: The Ruin of Kings
2: The Name of All Things

4.5 out of 5 stars
4.5 out of 5
717 global ratings
How are ratings calculated?
To calculate the overall star rating and percentage breakdown by star, we don’t use a simple average. Instead, our system considers things like how recent a review is and if the reviewer bought the item on Amazon. It also analyzes reviews to verify trustworthiness.

Kardestis
4.0 out of 5 stars Excellent sequel, quality of editing slightly lower.
Reviewed in Canada 🇨🇦 on March 5, 2021
Verified Purchase
The editing (at least in the kindle version) isn't as great as the first book, but still a great read, and I absolutely recommend it if you liked the first book.
Read more
Helpful
Report abuse

Dawn
4.0 out of 5 stars Imaginative
Reviewed in Canada 🇨🇦 on January 29, 2020
Verified Purchase
I enjoyed the first book, but really struggled to finish this one because the story simply does not flow. The authors writing style continually interrupts the narrative, continually introducing obscure characters until it all becomes too disjointed to enjoy. The imagination required to create the characters, cultures, relationships and storyline is magnificent, which is why I gave 4 stars. This book takes too much effort to read enjoyably.
Read more
Helpful
Report abuse

jean callaghan
5.0 out of 5 stars Very good condition
Reviewed in Canada 🇨🇦 on July 24, 2020
Verified Purchase
.I am enjoying right now this no2 of 3 thank you
Read more
Helpful
Report abuse

Amazon Customer
5.0 out of 5 stars A must read!
Reviewed in Canada 🇨🇦 on December 30, 2019
Verified Purchase
This book was amazing and I couldn't put it down. I recommend this series to all my fantasy loving friends!
Read more
Helpful
Report abuse

Beverley Burgess Bell
1.0 out of 5 stars Disjointed and confusing
Reviewed in Canada 🇨🇦 on July 25, 2021
I really enjoyed the first book in this series - The Ruin of Kings and was looking forward to the next. Unfortunately, I found it quite unreadable. Too much dialogue, too many new characters and disjointed. I gave up - feeling disappointed. The first book had me salivating from the first line which was incredible. I think the author rushed the book and didn't take time to flesh it out well.
Read more
Helpful
Report abuse
See all reviews

Fantasy Geek
5.0 out of 5 stars A big step up..
Reviewed in the United Kingdom 🇬🇧 on November 7, 2019
Verified Purchase
This is book 2 of chorus of dragons do not attempt to read this without reading book one I did read book one and I have a fairly good memory when it comes to remembering plots and story points ext and I was still completely lost for the first 60 pages or so.
Like the first book this is set in a high fantasy world where 12 royal families function like quasi corporations under the emperor, an ancient prophecy about a hell warrior is starting to come to fruition and a ancient evil is on the verge of waking up.

The first book followed Khirin a bastard son of the royal house D’Mon and former slave and the reincarnation of an important figure, this book follows janel a count of Jorat a horse obsessed kingdom and the only survivor of the biggest hellmarch, when a group of demons gather together and summon a Demon prince, in recent memory.

Janel is a likeable protagonist who shares POV with qown a monk and mage the dialogue is snappy the supporting cast is interesting I considered book one a dark fantasy and while this is still gritty and violent it’s also a bit lighter in tone maybe because Janel while having plenty of her own trauma isn’t a slave and has a driving urge to protect and help.

Again like the first book this all sounds very standard where it differs is the complexity you have races that were once immortal that are not you have 8 gods and 8 dragons and 8 cornerstones except we find the numbers that don’t always match we have god kings and queens that may or may not be dead and who aren’t actually gods but are more then wizards, and demons whatever they actually are added to reincarnation, and the prohised hell warrior is at least 4 people not one we have factions and plans in place wedded to a narrative structure that while I found much easier to follow then the first book a lot less messy there’s still multiple POV and two different timelines and footnotes that work better then the last because they serve both as a source of humour and as a hint of the opposition view point indeed the book does a great job of upping the stakes, making the sides less clear cut while taking the grimness down a notch though as side it’s still gritty by any stretch. While this isn’t a casual read demands too much in the way of attention it’s a lot of fun and a superior follow up to a strong first book.
Read more
4 people found this helpful
Report abuse

JonP
4.0 out of 5 stars 3 days since I couldn't think of a headline.
Reviewed in the United Kingdom 🇬🇧 on February 3, 2020
Verified Purchase
The sequel/next in series to Ruin of Kings ("the most anticipated debut ... "). The story starts 3 days after the end of the first novel (each chapter has humours sub-headings "3 days since ..." followed by significant events from the day), but the bulk of the story is the narration by a pair of new characters (Janel a count in one of the Quur empire's annexed nations - Jorat - and her aide Qwon a priest) recounting events of the last few years to Khirin, leading up to the present day. The story is pretty much what some of the "bad" guys of book 1 were up to when they weren't tormenting Khirin, told from Janel and Qwon's perspective. It sounds a little complicated, but it's actually much easier to follow than the first book, and fleshes out the whole thing quite a lot. It's also not going how you'd expect heroic fantasies to go - typically you'd have a hero(es) saving the day, but here they blunder around trying to do the right thing but may actually be making things worse. Saying that the "bad" guys are quite bad, but also somehow manage to seem entirely reasonable at the same time.

There are few things that bothered me a little - Jorat is a slighty unbelievably liberal place given what has been happening, though the story almost justifies it and I could just about accept it. Also the main characters are so nice, it made me miss Jorg Ancrath. Janel is supposed to have been tormented by a demon as a child (the same one with the unpronouncable name who tormented Khirin in book 1), but she's all 'right-on' attitude and 'turn the other cheek' fairness - I thought there might have been a bit more of an edge to her character.

Saying that though, it is still very good - better than book 1. There's more confidence to the writing, and it all feels like it hangs together a lot better. The main story is building up nicely and I'm looking forward to the next one!
Read more
2 people found this helpful
Report abuse

DadTheTooth
5.0 out of 5 stars Just brilliant
Reviewed in the United Kingdom 🇬🇧 on April 30, 2021
Verified Purchase
I love this trilogy, struggle to put it down, sneak quick reads whenever I can justify a spare moment (more than I should probably but m getting away with it). The story and characters are rich full 3D and interesting, the politics is cruel (pretty normal really), the magic different and the fighting bloody. There are also more twists and turns than a twisty turny thing.
Gotta read the last instalment…….
Read more
Report abuse

Amazon Kunde
2.0 out of 5 stars Good book - bound incorrectly and pages missing
Reviewed in the United Kingdom 🇬🇧 on May 27, 2022
Verified Purchase
The book is amazing!

Sole issue, my book arrived in time and well. However when I finally go down to reading, I realised that there are a few issues with how the book was put together.

There are about 30 pages missing in the first half, and then about 50 pages double further at the end.
Read more
Report abuse

Kindle Customer
2.0 out of 5 stars Loved the first book, terrible sequel
Reviewed in the United Kingdom 🇬🇧 on April 19, 2021
Verified Purchase
Thanks for making this the single worst sequel ever. Everything from the over-emphasised ideological cheerleading about gender to the snarky dialogue that transforms each character into one giant snarky character. What a shame!
Read more
Report abuse
See all reviews