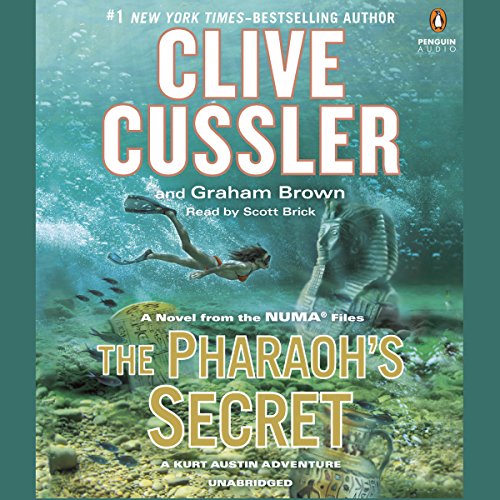 When the NUMA crew is exposed to a dangerous toxin, Kurt Austin and Joe Zavala will stop at nothing to find a cure foretold by Ancient Egyptian lore in this exhilarting novel from the number one New York Times best-selling series.

Head of NUMA special assignments, Kurt Austin and his most trusted friend, Joe Zavala tangle with a ruthless powerbroker scheming to build a new Egyptian empire as glorious as those of the Pharaohs. Part of their adversary's plan rests on the manipulation of a newly discovered aquifer beneath the Sahara, but an even more devastating weapon at his disposal may threaten the entire world: A plant extract known as the black mist, discovered in the City of the Dead and rumored to have the power to take life from the living and restore it to the dead.

With the balance of power in Africa and Europe on the verge of tipping, Kurt, Joe, and the rest of the NUMA team will have to fight to discover the truth behind the legends - but to do that, they have to confront in person the greatest legend of them all: Osiris, the ruler of the Egyptian underworld.

Get 3 months of Audible for only $5.95/mo!
You get 3 credits and unlimited access to podcasts, originals and more.
Limited time offer! Get started
Learn more about membership
List Price: $39.48
You Save: $4.93 (12%)
By completing your purchase, you agree to Audible's Conditions Of Use and Amazon's Privacy Notice. Tax where applicable.
Sold and delivered by Audible, an Amazon company
Share

4.6 out of 5 stars
4.6 out of 5
2,200 global ratings
How are ratings calculated?
To calculate the overall star rating and percentage breakdown by star, we don’t use a simple average. Instead, our system considers things like how recent a review is and if the reviewer bought the item on Amazon. It also analyzes reviews to verify trustworthiness.

Dr. Tim Parker
HALL OF FAMETOP 50 REVIEWERVINE VOICE
5.0 out of 5 stars Solid, fun read, with a decent plot. Another good book in the NUMA series.
Reviewed in Canada 🇨🇦 on December 2, 2015
Verified Purchase
Some have accused Cussler and his coauthors of churning out books for commercial reasons. Perhaps so, but as long as the quality remains solid and the books are fun and interesting to read, who cares? The last few Cussler books have all been solid reads for me, and I would not complain if he managed to double his output!

This novel is a NUMA series, and deals with a plan to control water supplies in the Middle East along with a mysterious nerve toxin that kills...sort of. Character developments isn't really a strong point in this book, but it doesn't really matter. The story is interesting (not too far-fetched) and the action is continuous. It's an engrossing read throughout, and I enjoyed reading chapter-by-chapter, always drawn in quickly. In the end, that's what I want from a book like this: keep me entertained and wanting more, and that's all that matters.
Read more
2 people found this helpful
Helpful
Report abuse

Emma
3.0 out of 5 stars Doesn't have the usual wow-factor.
Reviewed in Canada 🇨🇦 on June 1, 2017
Verified Purchase
I bought this book for my birthday, as I am and avid reader and love Clive Cussler's novels. This one left me longing for a better adventure, The elements are all there, but the suspense is missing. This is the first CC book that I had difficulty finishing.
Read more
Helpful
Report abuse

P Courteau
3.0 out of 5 stars I have enjoyed them all
Reviewed in Canada 🇨🇦 on March 24, 2016
Verified Purchase
I have read every Clive Cusslwe novel printed, I have enjoyed them all, I am not a huge fan of the series with Isaac Bell but will read them anyways. This book Pharoahs Secret, was not my favourite but was still good, hence my three star rating.
Read more
Helpful
Report abuse

Vicki Rigsby
5.0 out of 5 stars GREAT
Reviewed in Canada 🇨🇦 on December 19, 2015
Verified Purchase
Clive Cussler writes a great book everyone should read at least one of his many.
The book itself arrived ahead of time and in marvelous condition, it was a good experience dealing with them
Read more
Helpful
Report abuse

Hamruniz
4.0 out of 5 stars Another great adventure.
Reviewed in Canada 🇨🇦 on March 29, 2017
Verified Purchase
Never fails to write a suspenseful story. Loved it especially since parts of it happen in Malta, my native country.
Read more
Helpful
Report abuse

Bevy
4.0 out of 5 stars Another Cussler hit!
Reviewed in Canada 🇨🇦 on July 30, 2021
Verified Purchase
Any book by Clive Cussler is great for me. I think I have read every one of them.
Read more
Helpful
Report abuse
See all reviews

Tony
2.0 out of 5 stars NUMA takes a dive.
Reviewed in the United Kingdom 🇬🇧 on July 1, 2017
Verified Purchase
I've got quite a collection of Clive Cusler books and they have all been thoroughly good reads, but I have to say that this book was a big disappointment. I wonder how much of an input Clive Custler actually had in the writing of this story. The writing was of a mediocre standard and the whole story was so full of holes you could drive a bus through it. The storyline was implausable and completely impossible, even in the realms of science fiction. I won't give the whole story away, but to even suggest that one could drain the whole Sahara aquifer and dump all that water into the Nile in a matter of days, causing riots across the whole of North Africa, stretches incredulity to the limit. The characters were un-memorable and every time some calamity befell our heroes a convenient and totally unlikely scenario developed to save them.
I know Clive Custler stories are meant to be a bit 'gung ho' and not in the real world, but this particular story pushed that theme too far and by the time I neared the end I had lost any interest in the final outcome, which was probably the daftest thing in the whole book.
I like a good devil may care adventure story, but I'm afraid this wasn't one.
Read more
6 people found this helpful
Report abuse

Mr Roger M Abrahams
5.0 out of 5 stars A jolly good yarn!
Reviewed in the United Kingdom 🇬🇧 on October 23, 2022
Verified Purchase
I enjoyed every word - excellent!
Up to the author's usual standard.
I am looking forwad to the next one.
Read more
Report abuse

Amazon Customer
5.0 out of 5 stars Brilliant reading
Reviewed in the United Kingdom 🇬🇧 on August 31, 2021
Verified Purchase
As per usual Clive Cussler books, brilliant, not had a bad one, all keep you reading more very difficult to put down. A lot of books takes half book to get into them, but Cussler books one chapter get you hooked, other books , close down after two chapters, never had one of his books did not finish. Enjoyed them all and can read again and again, let’s hope if someone takes over his titles can keep that up.
Read more
Report abuse

Andy
4.0 out of 5 stars The NUMA series continues
Reviewed in the United Kingdom 🇬🇧 on April 15, 2019
Verified Purchase
Another adventure for Kurt and Joe. An entertaining read, as usual, with a historical twist to the plot - as suggested by the title. Plenty of action throughout. Looking forward to getting the next when the price is right. Don't you just hate the UK charging VAT on e-books.
Read more
Report abuse
See all reviews