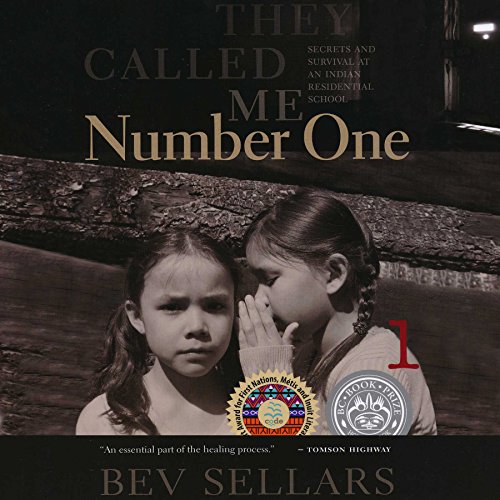 They Called Me Number One: Secrets and Survival at an Indian Residential School

Bev Sellars (Author, Narrator), Audible Studios (Publisher)
4.7 out of 5 stars 236 ratings
See all formats and editions
Sorry, there was a problem loading this page. Try again.

Like thousands of Aboriginal children in the United States, Canada, and elsewhere in the colonized world, Xatsu'll chief Bev Sellars spent part of her childhood as a student in a church-run residential school. These institutions endeavored to "civilize" Native children through Christian teachings; forced separation from family, language, and culture; and strict discipline. Perhaps the most symbolically potent strategy used to alienate residential school children was addressing them by assigned numbers only - not by the names with which they knew and understood themselves.

In this frank and poignant memoir of her years at St. Joseph's Mission, Sellars breaks her silence about the residential school's lasting effects on her and her family - from substance abuse to suicide attempts - and eloquently articulates her own path to healing. They Called Me Number One comes at a time of recognition - by governments and society at large - that only through knowing the truth about these past injustices can we begin to redress them.

Read more
©2013 Bev Sellars (P)2017 Audible, Inc.
Learn more about membership
List Price: $26.54
You Save: $3.32 (13%)
By completing your purchase, you agree to Audible's Conditions Of Use and Amazon's Privacy Notice. Tax where applicable.
Sold and delivered by Audible, an Amazon company
Share
Back to top
Get to Know Us
Make Money with Us
Amazon Payment Products
Let Us Help You
EnglishChoose a language for shopping. CanadaChoose a country/region for shopping.
© 2008-2021, Amazon.com, Inc. or its affiliates