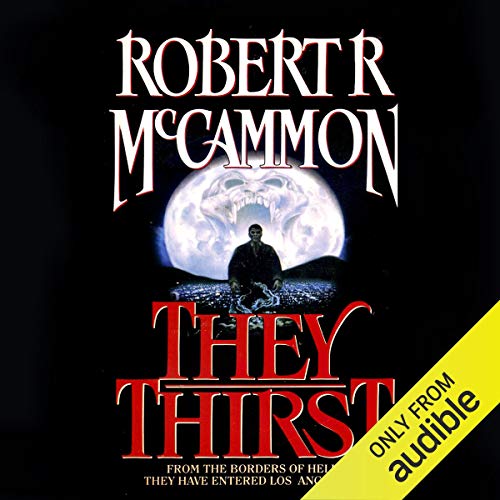 A Mass Murder. A Disappearance. A Cemetery Ransacked.

It looked like another ordinary day in Los Angeles. Then night came...Evil as old as the centuries has descended upon the City of Angels - it comes as a kiss from the terrifying but seductive immortals. Slowly at first, then by the legions, the ravenous undead choke Los Angeles with bloodthirsty determination - and the hordes of monstrous victims steadily mount each night.

High above glitter city a deadly contest begins. In the decaying castle of a long-dead screen idol, the few remaining human survivors prepare to face the Prince of Evil and his satanic disciples. Whilst the very forces of nature are called into play, isolating the city from the rest of the world and leaving it at the mercy of the blood-hungry vultures of the night...They Thirst

4.4 out of 5 stars
4.4 out of 5
958 global ratings
How are ratings calculated?
To calculate the overall star rating and percentage breakdown by star, we don’t use a simple average. Instead, our system considers things like how recent a review is and if the reviewer bought the item on Amazon. It also analyzes reviews to verify trustworthiness.

spider queen
4.0 out of 5 stars before its time
Reviewed in Canada 🇨🇦 on January 30, 2021
Verified Purchase
I must have read this when it first came out, because, you know: vampires eh

But all these years later, what a treat to find it again. Good plot, well written, interesting characters--including the Master, which often is not the case. I'd recommend it to fans of this genre.

And, ahem, I'd like to much more about the Headmaster, please and thanks.
Read more
Helpful
Report abuse

Guy E. Moosburger
5.0 out of 5 stars Been looking for this book over the years.
Reviewed in Canada 🇨🇦 on September 20, 2020
Verified Purchase
I read that the author felt that a few of his books were not worthy to be republished. I glad he changed his mind. The book is fantastic. It's been 30 years since I read it and I love it but what's different now is that I have a few hundred books under my belt and can appreciate the work that goes into writing and the time he did write it - no cells phones and Much Music was still very much a thing - the 80s.
Read more
Helpful
Report abuse

Old_Cat
5.0 out of 5 stars Scary! Freaked my daughter out!
Reviewed in Canada 🇨🇦 on January 18, 2023
One of the greatest Vampire reads ever! I have read it at least 5 times and it doesnt get old! It would make a killer movie if done right! Not like Stephen King movies, they suck!
Read more
Helpful
Report abuse

msmare
5.0 out of 5 stars I got it!
Reviewed in Canada 🇨🇦 on April 6, 2015
Verified Purchase
Sooooo happy to get it...I read this as a preteen, ya my parents let me, and also thru my teenage years...made such an impact that I been looking for it for years...now I have it again...and top it all off same cover when I was young
Read more
Helpful
Report abuse

cathy goulette
4.0 out of 5 stars awesome read
Reviewed in Canada 🇨🇦 on January 20, 2013
Verified Purchase
No complaints, this is one of my favorite books and I have been unable to find it and have been looking for many years, just so happy to have it and read it again
Read more
Helpful
Report abuse

Sarah
4.0 out of 5 stars Keep your cross handy!
Reviewed in Canada 🇨🇦 on June 11, 2004
I wore my cross for over a month after reading this book. Granted, I was 12 and just beginning to read about vampires, but, nevertheless, such a reaction cannot be ignored. Now 19, I have forgotten many plot details but still recall certain descriptions and the consistently chilling mood of the story. I recommend this book to any fan of the vampire genre, and the horror genre in general. Read this for an emotional response, not literary evaluation. I remember being vaguely dissatisfied by the ending, though that hasn't diminished my opinion of the book or my determination to read it again.
Read more
Helpful
Report abuse

Amazon Customer
4.0 out of 5 stars Great reading value
Reviewed in Canada 🇨🇦 on December 20, 2003
What can one say about a book of epic proportions! It is a story well written and set in our modern times of vice, greed and the apathy concerning our fellow human beings.
It is a story of a boy, a vampire that has the teachings of Alexander the great, wit a master of other-worldy wispness, a jaded police officer with old world roots and stories, a crass group of bikers, LA gangs, priests, mediums, drug pushers and the roach - a simpleton pest exterminator that plays a pivotal role in defining the low point of the human condition.
Should be made into a classic movie!
Read more
Helpful
Report abuse
See all reviews

Andy Raff
5.0 out of 5 stars It's basically Salem's Lot but...
Reviewed in the United Kingdom 🇬🇧 on November 24, 2021
Verified Purchase
One of my favourite books. Read it first 30 years ago or so, and return to it regularly. Don't expect deathless prose or grand literature, but enjoy a solid tale from tye olden days when we knew vampires were the enemy,
Read more
One person found this helpful
Report abuse

Chris Palmer
4.0 out of 5 stars They Thirst
Reviewed in the United Kingdom 🇬🇧 on March 3, 2019
Verified Purchase
Excellent contemporary take on the Vampire book it slowly picks up speed and diverse characters until it eventually rockets along at a breathtaking speed. This is one book you will find difficulty in putting down.Robert McCammon has successfully carved a niche for himself in the world of Horror writers.
Read more
2 people found this helpful
Report abuse

keith howard
5.0 out of 5 stars Excellent Book
Reviewed in the United Kingdom 🇬🇧 on November 24, 2014
Verified Purchase
I read this book years ago, and Ive been hoping it was going to migrate to Kindle because when I first read it i wasn't really into reading as much as now, and although I remembered the basis of the story, i couldn't remember the characters. I have just finished it , and it was awesome, it wasn't the new lovey dovey vampire books this is the real deal, how you would expect them. the hero's of the book are like you and me and I was left waiting until the end to find out who won the battle. Loved it
Read more
3 people found this helpful
Report abuse

Prehistoric John
5.0 out of 5 stars One of the best vampire stories written
Reviewed in the United Kingdom 🇬🇧 on November 29, 2012
Verified Purchase
I've always liked Robert R.McCammon and this is one of his best books. Yes, you have to accept vampires exist but once, for the purpose of enjoying the story, you have, this unfolds at almost breakneck speed. There's a logic to the way the vampire 'army' multiplies and takes over more and more of the country that is often missing in such stories. I had this in paperback many years ago and have revisited it on my Kindle. If you like horror stories this is an ideal companion to curl up in bed with. Best read at night with the lights right down!
Read more
4 people found this helpful
Report abuse

Wayne
4.0 out of 5 stars A good read
Reviewed in the United Kingdom 🇬🇧 on March 24, 2022
Verified Purchase
But not as good as some of his books, Sean song still takes some beating, but still worth a read.
Read more
Report abuse
See all reviews