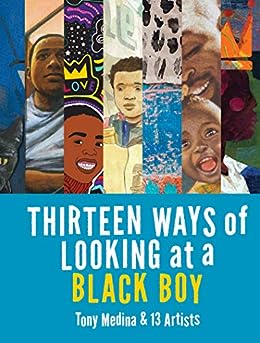 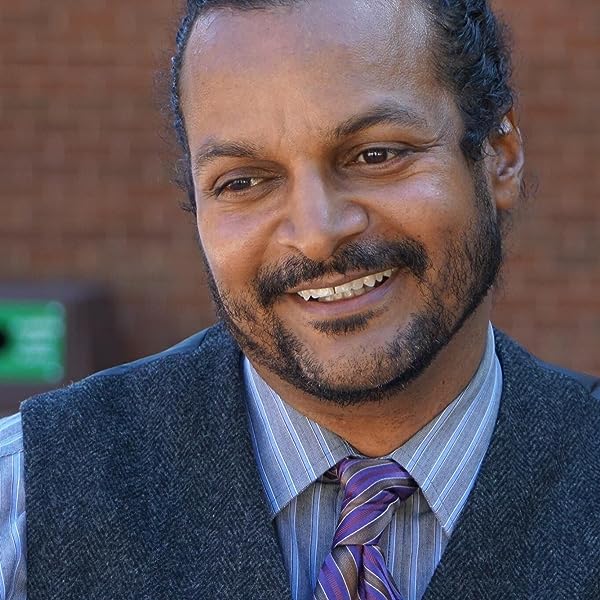 Thirteen Ways of Looking at a Black Boy Kindle Edition

"The very different artistic renderings, which range from solid to psychedelic, all catch the eye. Though short (only 31 syllables over 5 lines), the poems pack a punch and are a great introduction to reading poetry and the art of writing it. Teachers and other adults will find many ways to use this with children." —Booklist

Tony Medina is a two-time winner of the Paterson Prize for Books for Young People (DeShawn Days andI and I, Bob Marley), is the author/editor of nineteen books for adults and young readers. A Professor of Creative Writing at Howard University, Medina has received the Langston Hughes Society Award, the first African Voices Literary Award, and has been nominated for Pushcart Prizes for his poems. Jacar Press recently published his anthologyResisting Arrest: Poems to Stretch the Sky, on police violence and brutalities perpetrated on people of color. Tu Books published Medina’s debut graphic novelI Am Alfonso Jones in 2017. He lives in Washington D.C.

Javaka Steptoe’s debut picture book,In Daddy’s Arms I Am Tall: African Americans Celebrating Fathers (Lee & Low Books, 1998), earned him a Coretta Scott King Illustrator Award and a nomination for Outstanding Children’s Literature Work at the NAACP Image Awards. Since then Steptoe has illustrated and/or written more than a dozen books for young readers, collaborating with some of the top names in the business, such as Walter Dean Myers, Nikki Grimes, and Karen English. His latest book,Radiant Child: The Story of Young Artist Jean-Michel Basquiat (Little, Brown, 2016) won the 2017 Caldecott Medal and 2017 Coretta Scott King Illustrator Award.

R. Gregory Christie is a five-time recipient of the Coretta Scott King Honor Award in Illustration. He is the designer of the 2013 Kwanzaa Forever stamp for the United States Post Office, a two-time recipient of the New York Times 10 Best Illustrated Children’s Books of the Year Award, and an NAACP Image Award recipient. His most recent book,Freedom in Congo Square, won a 2017 Caldecott honor. He has illustrated more than 50 books, a multitude of magazine images, and many jazz album covers. You can visit him at his Decatur, GA bookstore, GAS-ART GIFTS, or online at www.gas-art.com.

Ekua Holmes’s collages celebrate the vibrancy of urban life and the joys and challenges of childhood. She was the recipient of a 2013 Brother Thomas Fellowship from The Boston Foundation for her contributions to the Boston arts community. In 2014 she became the first African American woman to be appointed to the Boston Arts Commission. Holmes’s debut as a picture book illustrator,Voice of Freedom: Fannie Lou Hamer: The Spirit of the Civil Rights Movement (Candlewick, 2015) by Carole Boston Weatherford, received a Silver Medal from the Society of Illustrator’s Original Art exhibition, the Robert F. Sibert and Randolph Caldecott Honors, and a Coretta Scott King John Steptoe New Illustrator Award.

With over 100 children’s books to his name,Floyd Cooper is a master craftsman of children’s literature and illustration. He has received numerous awards and praise for his work, including three Coretta Scott King Honors, an NAACP Image Award, the Jane Addams Peace Honor, the Simon Wiesenthal Gold Medal, and the prestigious Sankae Award of Japan. He is the 2018 artist for the U.S. Postal Service KWANZAA Forever stamp. This Tulsa native now makes his home in Easton, PA, with his wife Velma, sons Dayton and Kai, daughter-in-law Melissa, and grandson Niko.

Tony Medina is a poet, graphic novelist, editor, short story writer, and author. Born in the South Bronx and raised in the Throgs Neck Housing Projects, Medina earned a BA in English at Baruch College, CUNY, on the GI Bill, and an MA and PhD at Binghamton University, SUNY, where he received the Distinguished Dissertation Award. Medina has published 23 books for adults and young readers, the most recent of which are Che Che Colé; Death, With Occasional Smiling; Thirteen Ways of Looking at a Black Boy; I Am Alfonso Jones; and Resisting Arrest: Poems to Stretch the Sky. Medina’s awards include the Paterson Prize for Books for Young People, the Langston Hughes Society Award, the first African Voices Literary Award, the Lee Bennett Hopkins Poetry Award honor, Special Recognition from the Arnold Adoff Poetry Award, and the Firecracker Alternative Book Award from the American Booksellers Association for In Defense of Mumia. He has appeared in several documentaries and CD compilations and has read/performed his work all over the United States, as well as in Germany, France, Poland, the Bahamas, Puerto Rico, and the Netherlands. The first professor of creative writing at Howard University, Medina’s poetry, fiction and essays appears in over 100 journals and anthologies, including Sheree Renée Thomas' Dark Matter, Ishmael Reed’s Hollywood Unchained and Kevin Young’s Library of America anthology, African American Poetry: 250 Years of Struggle & Song, and as an advisory editor for Nikki Giovanni’s Hip Hop Speaks to Children. Medina has also been featured on NBC's philanthropic reality show, Give, PBS’ White House Chronicle, CBS’ Great Day Washington, SiriusXM’s Kids Place Live, Medgar Evers College’s Writers on Writing, Forbes magazine, and has worked extensively with the non-profit literary organizations Say It Loud, Behind the Book, and Meet the Writers. Medina's book, Thirteen Ways of Looking at a Black Boy, was featured on Let's Learn NYC for PBS. Follow him on Facebook; Twitter: @PoetTonyMedina and Instagram: poettonymedina. His website is tonymedina.org.

4.7 out of 5 stars
4.7 out of 5
60 global ratings
How are ratings calculated?
To calculate the overall star rating and percentage breakdown by star, we don’t use a simple average. Instead, our system considers things like how recent a review is and if the reviewer bought the item on Amazon. It also analyzes reviews to verify trustworthiness.
Top reviews

Nan-C
5.0 out of 5 stars The Love of a Black Boy!
Reviewed in the United States on April 9, 2018
Verified Purchase
I treasure my 5 grandsons. They are not the same and their beauty comes out in so many different ways. They are creative, active, silly, mischievous, wise, and they are readers. Today, the media generally highlights the killing of Black boys along with emphasizing their faults. Sometimes there is not one nice image that can be seen of them on television or the movies, yet so many of us know that beautiful Black boys exist all over this world. I thank Tony Medina for writing these thirteen LOVE poems to celebrate the existence of Black boys. The quickness of words to show the joy, the pride, the experiences, and the world that surrounds them makes the reader smile and pause at the end of each 31 syllables. THIRTEEN WAYS OF LOOKING AT A BLACK BOY is also lifted up by the awesome 13 Black artists that gifted each page to create this book. The images are funny, family, adventurous, and glow with love. Yes, I thank Tony Medina for writing this book because it also represents a writer that was once one of those beautiful Black Boys!!!
Read more
3 people found this helpful
Report abuse

Tamara Hewlett
5.0 out of 5 stars Must have in your library!
Reviewed in the United States on March 1, 2018
Verified Purchase
I’ve been waiting for my copy and it finally arrived tonight. As a mother of two black boys, I’m always looking for books that reinforces their beauty, strength, power, and most importantly worth. This book offers a perspective not common in literature for kids, especially kids of color. To be referred to as kings, to elevate the swag that is them, to make it known the role that black boys growing into a men play in their community..... the author does a fantastic job putting forth what I know to be true about my black boys and the many black boys I’ve had the privilege to teach, watch grow, and even encounter on the fly. On top of that, the artistry is phenomenal. The illustrations really bring the words to life! Vivid, colorful, precise, warm, and unique in each way! Thank You, Thank You, Thank You, Tony Medina!
Read more
7 people found this helpful
Report abuse

Shawnee S. Wood
5.0 out of 5 stars Important poetry for every mother
Reviewed in the United States on April 23, 2021
Verified Purchase
Amazing illustrations and heartwarming poetry to share the love every child should know. A celebration of sons. I read as the author wrote, and gained empathy for the love and fear mothers of bipoc children for their beautiful babies of all ages. I love and worry about my own, but know in this day, there exists a level of concern that I'll never fully grasp. I thank the artists for making this text come alive.
Read more
Report abuse

Amazon Customer
5.0 out of 5 stars For the love of our boys!!
Reviewed in the United States on January 12, 2020
Verified Purchase
I got this book because I love what Dr Medina is all about and how this book encourages my son! My son is learning to read and this book helps him learn to see himself positively in the world. We talk about the pictures and I simply enjoy how he engages with this book. It’s a part of our nightly reading sessions before bed!!
I could think of a million ways to see a black boy! This book highlights 13 that are pretty cool!
Read more

Amazon Customer
5.0 out of 5 stars For the love of our boys!!
Reviewed in the United States on January 12, 2020
I got this book because I love what Dr Medina is all about and how this book encourages my son! My son is learning to read and this book helps him learn to see himself positively in the world. We talk about the pictures and I simply enjoy how he engages with this book. It’s a part of our nightly reading sessions before bed!!
I could think of a million ways to see a black boy! This book highlights 13 that are pretty cool!

Karen yee
4.0 out of 5 stars Poetry & Pictures
Reviewed in the United States on September 5, 2019
Verified Purchase
I purchased the paperback version...pictures are a bit small for full appreciation...saw a hardcover copy at B & N and the pics/art work were stunningly beautiful...wish I'd waited and purchased the hardcover copy to share with family.
Read more
Report abuse
See all reviews
Report an issue
Does this item contain inappropriate content?
Report
Do you believe that this item violates a copyright?
Report
Does this item contain quality or formatting issues?
Report