This title is also available to read for $0.00 with Prime. Learn More 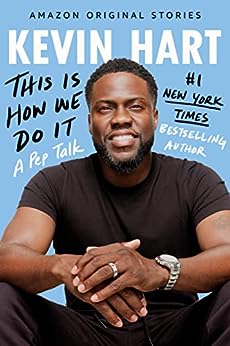 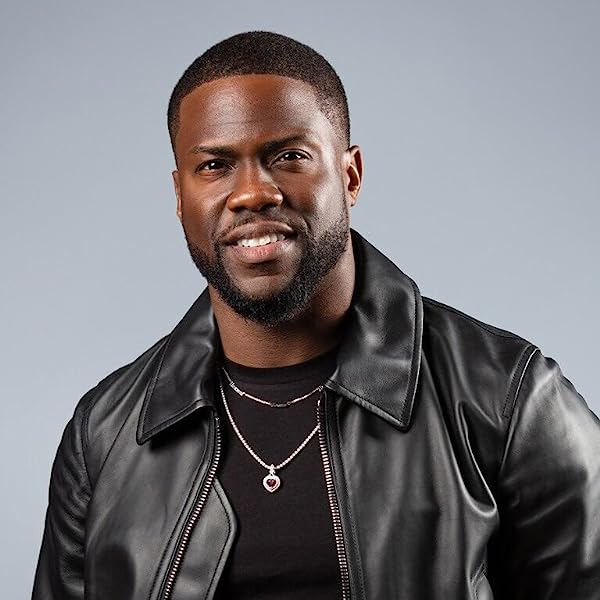 This Is How We Do It: A Pep Talk Kindle Edition

Enjoy a great reading experience when you borrow the Kindle edition of this book with your Kindle Unlimited membership. Learn more about Great on Kindle, available in select categories.

Entertainment icon Kevin Hart, the number one New York Times bestselling author of I Can’t Make This Up: Life Lessons, shares fifteen heartfelt lessons about harnessing your potential in the here and now.

YOU CAN DO IT.

You’ve heard this advice before. Yes, of course you have. It’s straight out of the self-help bible.

But wait. Are you ready to hear it from a guy who’s made so many mistakes he could fill eighteen other books about them? A guy who went to community college for exactly two weeks and earned a degree in nothing? A guy who wore long tights for a marathon?

That’s this guy: Kevin Hart. He wants to share some lessons he’s learned along the way—lessons that helped him get to where he is now. He wants to talk to you about “what-is-ness,” “cowboying up,” and “teddy bearing.”

No idea what those are? Don’t worry. That’s why you’re here. In this funny, heartfelt collection of pep talks, Kevin Hart reveals the power of a positive mindset.

In this book, the tables are turned. Kevin Hart isn’t just a box office juggernaut and superstar comedian.

Adapted from The Decision.

Kevin Hart is an award-winning actor, a comedian, and a number one New York Times bestselling author. His films, including Jumanji, Captain Underpants, and The Secret Life of Pets, have earned billions at the box office, and his stand-up comedy tours have sold out arenas and football stadiums, leading Forbes to name him the “king of comedy.” His novel Marcus Makes a Movie was an instant New York Times bestseller and was published to great critical acclaim, with Kirkus Reviews praising it as “a charming read…that celebrates the gifts of authentic friendship” and Publishers Weekly calling it an “energetic love letter to the artistic process.” In the laugh-out-loud sequel, Hart delivers a sincere message about the perils of sudden fame and the importance of sticking close to the friends and family who helped get you there.

Hart is also an entrepreneur, a television producer, and the chairman of the Laugh Out Loud Network and CEO of HartBeat Productions. He lives in Los Angeles with his family.

Emmy nominated producer, Kevin Hart was born and raised in Philadelphia, Pennsylvania where he launched his career as a comedian during an amateur night at a local comedy club. Over the years Hart has become Hollywood’s box office powerhouse, opening ten films at number one at the box office with $4.23 billion revenue at the global box office. Hart can most recently be seen in his newest stand-up special, “Zero Fu**ks Given,” which quickly became Netflix's biggest stand-up special of 2020. Hart is currently in production on his new Netflix drama series, “True Story,” which he is starring in opposite Wesley Snipes and also producing through his Hartbeat Productions.

In 2020 Hart starred in “Die Hart,” the first production of its kind, created through his digital network, Laugh Out Loud, and Executive Produced through his production company, Hartbeat Productions. He recently wrapped production filming Sony’s action-comedy, The Man From Toronto, which he is starring in alongside Woody Harrelson and Kaley Cuoco. Hart can next be seen in his new film, Fatherhood, a movie which he is staring in and also producing through his Hartbeat Productions. Based on the best-selling book, Two Kisses for Maddy, Fatherhood tells the story of a single dad navigating parenthood after his wife unexpectedly dies a day after giving birth. In December 2019, Hart’s Emmy nominated Docu-series, “Don’t F**k This Up,” was released on Netflix. The intimate and honest 6-part series follows Hart’s life over the previous year, giving viewers an inside look to the events that shaped his life. Hart’s other recent box-office credits include Jumanji: The Next Level, which crossed $800 million in global revenue, The Secret Life of Pets 2, and The Upside. In 2018, Hart co-wrote, produced, and starred in Universal’s Night School, all under Hartbeat Productions. In 2017, Hart starred in Jumanji: Welcome to the Jungle, his highest grossing movie to date. Hart’s previous credits include: Central Intelligence, The Secret Life of Pets, and the Ride Along films.

Hart’s last global live standup comedy tour was “The Irresponsible Tour,” which was also released as an original Netflix standup special in April 2019. Additionally, his 2017 standup tour, “What Now,” grossed over $100 million worldwide and culminated in a performance to a sold-out crowd at Philadelphia’s NFL stadium.

Kevin’s memoir, I Can’t Make This Up, debuted at number one on The New York Times Best Sellers List and remained on the Top 10 Nonfiction Hardcover Bestsellers List for ten weeks straight. Hart’s first Audible original, “The Decision,” was nominated for an Audie award for “Best Original Audiobook in 2021.” On June 1, 2021 Hart will release his first middle school reader “Marcus Makes a Movie” for Random House publishing.

Hart’s digital network, the Laugh Out Loud Network, serves as a platform for emerging comedians and is home to two premium series which both feature Kevin – “What the Fit?” and “Cold as Balls.”

In the audio space, Hart can be heard bi-weekly on his radio talk show, “Straight From the Hart,” which airs on Sirius XM’s Laugh Out Loud Radio (channel 96). In 2019, “Straight From The Hart” became available on Pandora and now ranks as the #1 podcast across all genres. Hart can also be heard on his weekly Sirius podcast, “Comedy Gold Minds.”

4.4 out of 5 stars
4.4 out of 5
527 global ratings
How are ratings calculated?
To calculate the overall star rating and percentage breakdown by star, we don’t use a simple average. Instead, our system considers things like how recent a review is and if the reviewer bought the item on Amazon. It also analyzes reviews to verify trustworthiness.

lh76
4.0 out of 5 stars Kevin Hart says it like it is
Reviewed in Canada 🇨🇦 on December 29, 2022
Verified Purchase
I really like reading his stuff. He is real. He doesn’t mince words. He genuinely wants the best for everyone. I found this little book a nice little reminder of good ways to live a good life!
Read more
Helpful
Report abuse

Angela
4.0 out of 5 stars perfect little pep talk
Reviewed in Canada 🇨🇦 on December 26, 2022
Loved this. It’s just right and felt like Kevin was talking right at me and I enjoyed how easy a read it is.
Read more
Helpful
Report abuse

M-A
5.0 out of 5 stars Good read!
Reviewed in Canada 🇨🇦 on January 19, 2023
Got through it in a couple hours! Engaging and touched on great points while being entertaining. Would recommend for anyone!
Read more
Helpful
Report abuse

Varinder Singh
5.0 out of 5 stars legend
Reviewed in Canada 🇨🇦 on January 12, 2023
these are the branches of life. so please read it & use it wisely! thanks Kevin for sharing this amazing book.
Read more
Helpful
Report abuse

Randah Mouallem
5.0 out of 5 stars Loved it!
Reviewed in Canada 🇨🇦 on December 23, 2022
I love Kevin's way with words. The book had me nodding my head, smiling, and making a plan to turn me into the best version of me possible. A quick, easy read - highly recommend.
Read more
Helpful
Report abuse

Jma
5.0 out of 5 stars feel good, motivational and uplifting
Reviewed in Canada 🇨🇦 on December 2, 2022
The pep talk you need to hear, whether you like it or not. Download and read my friends- then get to work!
Read more
Helpful
Report abuse

Mrs. D
5.0 out of 5 stars Great advice
Reviewed in Canada 🇨🇦 on November 4, 2022
While the advice Kevin gives is nothing new, his perspectives and word choice are a much better way to share them than the preachy way of many other self help books.

I will look for his other books.
Read more
Helpful
Report abuse
See all reviews

Sweetestmoondust
5.0 out of 5 stars I absolutely loved this
Reviewed in the United Kingdom 🇬🇧 on December 12, 2022
Verified Purchase
This book is so straightforward and simple yet so true. Theres so much for everyone to use. It doesn't matter if you have physical problems or not
Read more
One person found this helpful
Report abuse

Manj Kalar
5.0 out of 5 stars Gotta love Kevin Hart
Reviewed in the United Kingdom 🇬🇧 on December 31, 2022
Verified Purchase
I have read and enjoyed Kevin’s own brand of self improvement books and this one does not disappoint. He succinctly shares key messages for life with a smattering of his experiences, always told in his humorous style. Love it. Thank you for sharing your golden nuggets. We, your readers, do appreciate them and you.
Read more
Report abuse

Zeus
5.0 out of 5 stars AMAZING!
Reviewed in the United Kingdom 🇬🇧 on December 31, 2022
Verified Purchase
Such an amazing read, so uplifting and powerful. I read this right before the new year and I'm so glad I did because I'm going into the new year with a positive mindset, feeling powerful and lastly, staying humble.
Read more
Report abuse

Dr. SBT.
5.0 out of 5 stars Amazing Life Lessons.
Reviewed in India 🇮🇳 on December 25, 2022
Verified Purchase
Wow.
What a great book.
So many valuable lessons on how to live & lead a meaningful life.
Short, crisp & to the point.
One of the best books I have read in 2022.
Read more
Report abuse

Jenifer
5.0 out of 5 stars 5 plus plus plus positively peppy stars!
Reviewed in the United States 🇺🇸 on December 6, 2022
Verified Purchase
This was awesome!
I've been a fan of Kevin Hart's stand-up & movies for a long time and every time I see him in an interview or on a talk show he has such a great personality. I was never sure if that was his genuine self or his celebrity but after reading this book, I can tell that he is truly a good, humble, extremely likeable person. This book just makes me even more of a fan.
You're never too young or too old to take to heart and apply all the positive actions he details in this book. I immediately gave this to my teenage son to read when I finished. I'm pretty sure it can help him navigate the rest of high school and into college and the real world with a much more positive outlook.
Excellent read!!
Read more
10 people found this helpful
Report abuse
See all reviews
Report an issue
Does this item contain inappropriate content?
Report
Do you believe that this item violates a copyright?
Report
Does this item contain quality or formatting issues?
Report