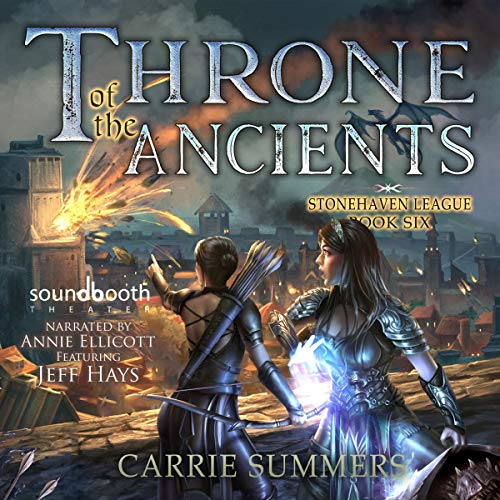 Throne of the Ancients (A LitRPG Adventure): Stonehaven League, Book 6

Being the Chosen One is supposed to be awesome, right?


Well, that's what most people assume. Most of them haven't tried it yet.


Devon Walker really just wanted to power level and collect some loot along the way. But yeah. Things in Relic Online just haven't turned out like she'd hoped.


Recently, she completed an epic quest line to reawaken ancient magic, but so far it's been anti-climactic. That would be sucky enough, but unless she figures something out, the game world - including her NPC friends who she believes are just alive as her human guildmates - is pretty much going to die in fire.


So yeah, no pressure.


The epic Stonehaven League saga continues with Throne of the Ancients. Buy now to listen!

4.4 out of 5 stars
4.4 out of 5
166 global ratings
How are ratings calculated?
To calculate the overall star rating and percentage breakdown by star, we don’t use a simple average. Instead, our system considers things like how recent a review is and if the reviewer bought the item on Amazon. It also analyzes reviews to verify trustworthiness.

Elias Dantas
3.0 out of 5 stars 3 book cycle curse
Reviewed in Canada 🇨🇦 on September 12, 2019
Honestly, still really liking the series as a whole.

Book 6 though? A bit of a disappointment. The story itself is very well put together, but the fact that Devon doesn't grow as a character after 5 books, especially considering her experience in her past life really irks me.

I also didn't like book #3, so here's hoping book #7 does what book #4 did for my enjoyment of the series.
Read more
Helpful
Report abuse

Dave Wickenden
5.0 out of 5 stars This is it! Demon War!
Reviewed in Canada 🇨🇦 on August 14, 2019
Ms. Summers delivers the goods. The build up to the Demon threat climaxes in an all out, winner take all, fight to the finish. Devon must find some weapon that can take on the Demon army that is literally at the gate of Stonehaven or they lose all. But she’s juggling a hundred details including a dead friend, losing her food supply, the safety of her people and a betrayer in her party.

This story just flies and Summers once again shows why she is such a talented fantasy writer. This series keeps getting more exciting.
Read more
Helpful
Report abuse

Ron
2.0 out of 5 stars a series i won’t continue
Reviewed in Canada 🇨🇦 on October 22, 2019
i will not be reading this series going forward. i don’t know if it is me or the story but i found myself skimming many sections of the book. i honestly felt this series should have been concluded by now as i find it repetitive.
Read more
Helpful
Report abuse
See all reviews

Jamie Hunter
4.0 out of 5 stars 4 star
Reviewed in the United Kingdom 🇬🇧 on April 29, 2020
Verified Purchase
Whilst the writing, characters and game world are still great, this book feels like it's soul purpose was to set up the next. A must read, if only to get to the last in the series.
Read more
Report abuse

LMH
5.0 out of 5 stars Awesome, kickass LitRPG sequel!
Reviewed in the United Kingdom 🇬🇧 on August 22, 2019
Verified Purchase
I have no idea how this series manages to keep getting better, but it does. Kudos to Carrie for continuing to write some of the most awesome, kickass LitRPG I've had the pleasure of reading!
Read more
Report abuse

Scott Osmond
4.0 out of 5 stars Stonehaven Under Siege
Reviewed in Australia 🇦🇺 on August 16, 2019
Verified Purchase
This one was a bit darker than previous entries. Devon is under a lot of pressure throughout the novel with a horde of demons attacking, a completed quest line that seemingly gives her no advantage and the Griefers are on their way back. She also has to navigate a budding relationship with her boss. The humour that has been a staple of this series is still present with both characters and the controlling AI humbling and embarrassing Devon at the worst time. Hailey's uploading to the network will have consiquences as it becomes harder to hide her existance. What I find interesting is that the self-creating AI network hasn't yet made it's motivations clear. It has intervened several times to help both Hailey and Devon what does it want in return? No dungeon dives in this one I'm afraid. Fewer levelling in this one, Devon only went up one level so very little stat changes and no progression trees to explore. The ending was a bit of a cliffhanger but the next one should be along in a couple of months. I'll be joining up for the adventure.
Read more
Report abuse

Scifi fan
5.0 out of 5 stars Awesome series
Reviewed in Australia 🇦🇺 on December 29, 2019
Verified Purchase
Definitely one of the best litrpg series I have read. I really enjoyed this and can't wait for the next installment of the series
Read more
Report abuse

Phoenix
3.0 out of 5 stars Good but serious
Reviewed in the United States 🇺🇸 on August 16, 2019
Verified Purchase
I liked this book and love the series. But. I think this book was to serious all the time and by that I mean Devon is in over her head with no time to grind or live. Seat of pants events and no way to be proactive not that Devon would be. I feel like the end of the world was rushed. Devon gained how many levels?? What skills and stats improved in the book?? So hopefully the next book will get back the the rpg part a little bit.. You know a peak.
As much as I love this series I had to grind more than I wanted to finish this book. Though the story line has some crazy twists that may entertain in the future.. But will see.
Read more
7 people found this helpful
Report abuse
See all reviews