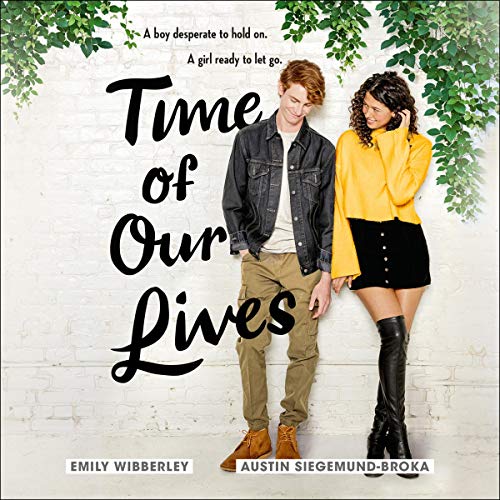 Time of Our Lives

Fitz Holton waits in fear for the day his single mother’s early-onset Alzheimer’s starts stealing her memory. He’s vowed to stay close to home to care for her in the years to come - never mind the ridiculous college tour she’s forcing him on to visit schools he knows he’ll never go to.

Juniper Ramirez is counting down the days until she can leave home, a home crowded with five younger siblings and zero privacy. Against the wishes of her tight-knit family, Juniper plans her own college tour of the East Coast with one goal: to get out.

When Fitz and Juniper cross paths on their first college tour in Boston, they’re at odds from the moment they meet - while Juniper’s dying to start a new life apart from her family, Fitz faces the sacrifices he must make for his. Their relationship sparks a deep connection - in each other’s eyes, they glimpse alternate possibilities regarding the first big decision of their adult lives.

4.3 out of 5 stars
4.3 out of 5
59 global ratings
How are ratings calculated?
To calculate the overall star rating and percentage breakdown by star, we don’t use a simple average. Instead, our system considers things like how recent a review is and if the reviewer bought the item on Amazon. It also analyzes reviews to verify trustworthiness.

HJ
3.0 out of 5 stars "I already know what the future holds. It's right now that has the potential to be extraordinary."
Reviewed in Canada 🇨🇦 on April 22, 2020
I totally respect what this book is trying to do. And what, I imagine, it will successfully do for many readers. It just didn't quite work for me.

This is such a great representation of the mixed emotions young people (I was young once!) feel going into the next stage (ie, post-high school) of their lives. The momentum that pushes them forward to escape their current situation (overbearing family, no room to be yourself, too much responsibility at too young an age, etc) and the reluctance to go too far afield (family obligations, health, anxiety, worry, etc). These characters were perfect representations of those, often conflicting though sometimes singular, feelings. I felt it.

Where this book failed for me, I think, was I didn't quite love the characters. I didn't love what followed their initial meeting and connection, and how that all came about, and I was hard pressed to believe how quickly they just "got" each other. Thankfully this relationship wasn't smooth sailing, I appreciated the arguments, the speed bumps, but overall it did kind of stretch my belief. Maybe if I had liked them more, I would've bought it? I don't know. Part of me had hoped this had gone a different way, been a story that connected these characters but didn't quite overlap.. she says, vaguely.

There are definitely emotional elements to this story, with some suffocating but reassuring (for the character) familial roles (honestly, the first few chapters dealing with Juniper's family made me want to break out in hives, but that's just me) and some heartbreaking health issues when it comes to a parent. Again, like before, I could feel it. But..

But overall, no matter how great the writing, how stunning some of the turns of phrase, this was a story very character-focused, and I just couldn't love them. The characters. Also, a certain cameo from IF I'M BEING HONEST made me so mad initially.. but that was redeemed. Had it not? I would've been devastated.

So this was a mixed bag, but also a strong read. These authors are definitely talented, and not writing the same story in each release (thank goodness for that), but this was also not what I got from IF I'M BEING HONEST and maybe, in part, that's also contributing to some disappointment. Even though I said different things are great. And they are. If you've enjoyed this duo before, I think you'll like this, too. Maybe not as much, maybe more. Who is to say. What I can say, though, is even though I didn't love it, I'll continue to read whatever they put out.
Read more
Helpful
Report abuse
See all reviews

Jennifer
2.0 out of 5 stars PLOT ISSUES GALORE
Reviewed in the United States 🇺🇸 on January 8, 2021
Verified Purchase
I initially gave this book three stars because it had SO MUCH POTENTIAL. Unfortunately, there are so many plot issues that I couldn't give it a three-star rating in good conscience.

First and foremost, Time of Our Lives is marketed as YA Romance. This book is NOT a contemporary YA romance novel; it's a coming of age story with very few romantic moments sprinkled in here and there. I love a good coming of age story (and, perhaps, I would have enjoyed reading this one under different circumstances), but I chose this book because I was in the mood for a heartwarming love story similar to the two previous novels published by this author duo. This book IS NOT that.

The plot (or lack thereof) is sluggish and slow. The first half of the book failed to hold my interest so much that I put it down and didn't pick it back up for nearly two weeks. I just didn't care about the outcome.

Juniper lives a busy and chaotic life in Springfield, Massachusetts. Her multi-generational household is bursting to the brim, and she yearns for the freedom an out-of-state college would provide. Fitz lives in nearby New Hampshire with his mom and feels a great deal of responsibility for her. She carries the gene for early onset Alzheimer's, so he's resigned himself to a future at a nearby college and hasn't even considered the possibility of going somewhere else. Regardless, he begrudgingly agrees to visit a few out of state schools just to appease his mom.

At the same time Fitz sets off on a week-long college tour, Juniper sets off on her own tour with her boyfriend Matt. Herein lies problem number one. Not only is it plain as day that Matt's character is nothing more than a plot device to get Juniper alone in NYC at the same time Fitz happens to be there, but they don't break up until halfway through the book. LITERALLY -- at the 50% mark. Yet, this story is about Juniper and Fitz.

I can't say much more without spoiling the story, so I'll just say that this --
there is no rising action and thus no falling action, no climax, and absolutely no tying of loose ends.

The ending left me deeply unsatisfied and wishing I had the hours I wasted reading this book back.
Read more
3 people found this helpful
Report abuse

Kindle Customer
5.0 out of 5 stars Woah!
Reviewed in the United States 🇺🇸 on December 30, 2021
Verified Purchase
What a beautiful book about family. The memories we want to keep and forget. Not living in the past but not forgetting it either. What the future holds and it being ok to be scared of it.