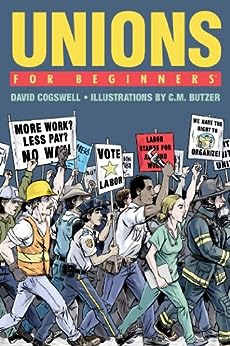 by David Cogswell (Author), C.M. Butzer (Illustrator) Format: Kindle Edition
See all formats and editions
Sorry, there was a problem loading this page. Try again.
Do you appreciate your forty-hour, five-day workweek? Appreciate having a safe working environment? Unions made this all possible in one way or another. Unions bring value to all sectors of a society. As the champion of people power versus corporate power, unions help to spread the benefits of production throughout a society. Regardless of the state of the economy, there is the timeless struggle of workers trying to gain or retain their rights. However, a vast amount of Americans (including union members) are unaware of the full history of unions and how they have impacted the American workplace today. Unions For Beginners provides an introduction to that essential history.

Written and illustrated in the user-friendly, accessible style of the For Beginners series, Unions For Beginners presents the epic story of the labor movement in a simple, memorable way. The role of unions in empowering working people to rise above unfair payment and work conditions to become full-fledged participants in the American dream they helped to build is told in vibrant detail. Unions For Beginners presents the history of unions and the labor movement, the principles underlying union organizing, the decline of unions in the shadow of the rising corporate state, and the resurgence in the 21st century of union activism.
Read more
Previous page
Next page
Due to its large file size, this book may take longer to download

"As David Cogswell reminds us, America’s economy boomed when union membership was at its height and descended into stagnant wages and underemployment as unions eroded. The author doesn’t entirely dismiss the corruption and lack of fair play that characterized some unions. However, he argues that, in balance, those organizations promoted a social ethic as well as prosperity, buoying the wellbeing of members and non-members alike." -- The Milwaukee Express

"Organized labor surged in the twentieth century, but not everyone understands their purpose in the modern day. Unions for Beginners discusses the role of unions in the American workforce as well as its history. David Cogswell provides a comprehensive introduction of what unions do for the modern worker, telling their history, and their place in today's corporate world that may be leading to their decline. Unions for Beginners is an intriguing modern history lesson, well worth considering for history and social issues collections." -- Midwest Book Review

David Cogswell is a writer based in Hoboken, N.J. He has written thousands of articles on business, travel, politics, and the arts for various print and online publications, including Democratic Underground, Bushwatch, Prison Planet, Indymedia.org, Fortune.com, Travel Weekly, the Hudson Current, and the Jersey Journal. He has contributed pieces to a number of political books, including Fortunate Son, The Making of an American President, by J.H. Hatfield; Ambushed: The Hidden History of the Bush Family by Toby Rogers; and America's Autopsy Report, by John Kaminski. He's the publisher of the political and media commentary website HeadBlast (www.davidcogswell.com), which was banned in China and named as a notable antiwar website by The Guardian.

C.M. Butzer was born and raised in a small town in Oregon just outside of Portland. In 1992 Butzer left Oregon to attend Cornish College of the Arts in Seattle where he earned a BFA in Illustration. After school he worked for Wizards of the Coast. In 1997 he travelled all over the American West bouncing from teaching environmental education, bartending to a half dozen other things. In 1998 he moved to Florence, Italy to become a tour guide on the Italian renaissance. In Florence, he met Luigi Galante, who ran a didactic illustration studio. C.M. apprenticed for six months and was hired on as a full time illustrator. He worked for Studio Galante for nearly five years before moving to New York City to earn his MFA at the School Visual Arts. Butzer Graduated 2005 and worked since as a Cartoonist and Illustrator. In 2009 Harper Collins published his Gettysburg the graphic novel. He is currently working on his second book and working as a storyboard and concept illustrator at JWT advertising agency. His work has been featured in the Society of Illustrators, American Library Association, and the Graphic Novel Reporter.

4.6 out of 5 stars
4.6 out of 5
15 global ratings
How are ratings calculated?
To calculate the overall star rating and percentage breakdown by star, we don’t use a simple average. Instead, our system considers things like how recent a review is and if the reviewer bought the item on Amazon. It also analyzes reviews to verify trustworthiness.
Top reviews

conjunction
5.0 out of 5 stars A Great Little Introduction
Reviewed in the United Kingdom on January 6, 2015
Verified Purchase
If you 'Look Inside' this book you might think it is a book for kids, you might even think as I did when I first looked at it that it has a patronising 'for beginners' tone.

Well it is for beginners in one sense, but don't be fooled. This is a very well researched book, and contrary to one reviewer on Amazon.com who clearly hasn't read the book, it is a brief history of Unions in the USA, a history illustrated with a large number of stories of strikes, of organizers, and political contexts.

The book is prefaced and postscripted with discussions about the nature of capitalism, the way it has developed, and the place of unions in democratic/capitalist society.

Some will see it as left wing propoganda. Well, there is a lot of stuff about corporations having small private armies and shooting unionists, beating them up, stuff like that. The kind of thing you don't read in newspapers owned by wealthy industrialists.

This is a great little introduction to the history of ordinary people fighting for their rights.

Sage Little
5.0 out of 5 stars I loved this book
Reviewed in the United States on June 12, 2016
Verified Purchase
I loved this book. It provides a good basis on union history. It explains the start of unions in america and their motivations, guiding principles, and function. The bulk of it is history using the examples of specific movements and people to get an overall idea of the entire history. I've read a bit about union history so I was happily suprised to find segments that gave me a deeper understanding of events I knew only a little, and also quite a bit of stuff I wasn't aware of. My only request would be to see more appendix on specific union activities and concepts, like organizing, bargaining, seniority, elections, etc. so it could be used as a bit more of a tool for new union members. As it stands I think it would be great for union members new and old though.
Read more
2 people found this helpful
Report abuse

Sandra L Rudolph
2.0 out of 5 stars Not What I expected
Reviewed in the United States on February 5, 2013
Verified Purchase
I stopped reading. I was looking for a history of the unions and not what I was looking for. Seemed to have a political agenda. Didn't finish reading, just not what I wanted.
Read more
One person found this helpful
Report abuse
See all reviews
Back to top
Get to Know Us
Make Money with Us
Amazon Payment Products
Let Us Help You
EnglishChoose a language for shopping. CanadaChoose a country/region for shopping.
© 1996-2022, Amazon.com, Inc. or its affiliates