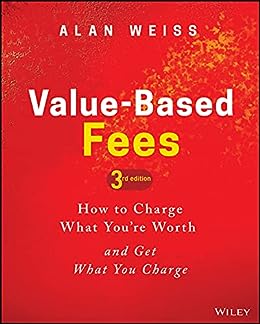 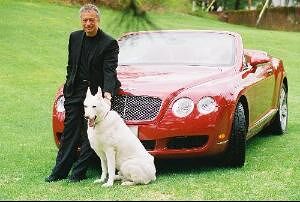 Value-Based Fees: How to Charge What You're Worth and Get What You Charge Kindle Edition

by Alan Weiss (Author) Format: Kindle Edition
See all formats and editions
Sorry, there was a problem loading this page. Try again.

The latest edition of the leading guide to consulting engagement pricing, from the “Rock Star of Consulting” Alan Weiss

In the newly revised Third Edition of Value-Based Fees: How to Charge – and Get – What You’re Worth, best-selling author, speaker and renowned consultant Dr. Alan Weiss delivers a thoroughly updated guide to proposing, and receiving, consistently high fees that are based on the value you deliver to each client you serve.

The author walks you through the many reasons that time-and-materials pricing models are outdated and inadequate and how to convert existing clients to your new value-based fee model. He also discusses fundamental new developments in consulting, including the remote delivery of services, the waning market power of the consulting giants, economic globalization, and the shift from project work to advisory work.

Among the step-by-step techniques and strategies provided in the book, you’ll find:

Perfect for newcomers to the consulting field as well as time-tested veterans, Value-Based Fees is an indispensable guide for every solo consultant, entrepreneur, and small consulting firm.

From the Inside Flap

The solo consulting industry has experienced dramatic developments that have reshaped the profession. From remote project delivery to the potential to attract a global client base, sole practitioners face challenges and opportunities barely dreamed of a decade ago. One thing that’s remained constant, however, is the importance of setting appropriate and profitable fees. In the completely revised Third Edition of Value-Based Fees, the “Rockstar of Consulting,” Alan Weiss, delivers a practical and effective guide to setting fees based on the value you deliver to your client. You’ll learn to propose, and receive, consistently impressive fees that more accurately reflect your worth than time-and-materials pricing models.

The bestselling author walks you through how to attract new clients using a value-based fee model and how to convert existing clients to your new system. You’ll get step-by-step techniques and strategies you can use to determine the monetary value of your services and how to create a “good deal” dynamic.

The book covers how to create, capitalize on, and market to trusted advisor relationships, avoid and rebut fee objections, create new consulting products, and explore lucrative new fields in the solo consulting space. Value-Based Fees also includes formulas to implement when you’re engaged in collaborative work or subcontracting out a job.

Perfect for new solo consultants as well as veterans of the field, Value-Based Fees, is a must-read resource for every consultant, entrepreneur, and boutique firm seeking to get paid what they’re worth. Let one of the world’s leading solo practitioners show you the blueprint to unlocking your income potential.

In Value-Based Fees: How to Charge What You’re Worth and Get What You Charge, world-renowned solo consultant and bestselling author Alan Weiss draws on his decades of experience building a leading consulting firm to show you how to transform the way you deliver services to your consulting clients.

Written specifically for boutique firm owners and solo consultants, both novice and professional, the book shows you how to base your prices on the value you deliver to your clients. Urging the abandonment of ineffective and outdated time-and-materials pricing models, the author discusses step-by-step strategies and techniques for implementing value-based pricing in the context of the latest developments in consulting.

You’ll learn how to increase your fees immediately while dealing effectively with objections and pushback, to create consulting products that bring in continuous outcome, and explore expanding and exciting new areas of consulting.

Ideal for solo consultants and practitioners, independent professionals, entrepreneurs, solopreneurs, and anyone else responsible for revenue generation, Value-Based Fees is an invaluable roadmap to getting paid what you’re worth.

ALAN WEISS, PHD, the “Rock Star of Consulting,” is one of the world’s most successful solo consultants. A bestselling author and speaker, he runs Summit Consulting Group, Inc., which serves some of the most recognizable brands in the world, including Merck, Hewlett-Packard, GE, and Mercedes-Benz.

--This text refers to the hardcover edition.
Read more

Alan Weiss is one of those rare people who can say he is a consultant, speaker and author and mean it. His consulting firm, Summit Consulting Group, Inc. has attracted clients such as Merck, Hewlett-Packard, GE, Mercedes-Benz, State Street Corporation, Times Mirror Group, The Federal Reserve, The New York Times, and over 400 other leading organizations. He serves on the boards of directors of the Trinity Repertory Company, a Tony-Award-winning New England regional theater, and the Newport International Film Festival.

His speaking typically includes 30 keynotes a year at major conferences, and he has been a visiting faculty member at Case Western Reserve University, Boston College, Tufts, St. John's, the University of Illinois, the Institute of Management Studies, and the University of Georgia Graduate School of Business. He has held an appointment as adjunct professor in the Graduate School of Business at the University of Rhode Island where he taught courses on advanced management and consulting skills. He holds the record for selling out the highest priced workshop (on entrepreneurialism) in the 21-year history of New York City's Learning Annex. His Ph.D. is in psychology and he is a member of the American Psychological Society, the American Counseling Association, Division 13 of the American Psychological Association, and the Society for Personality and Social Psychology. He was recently appointed to the Board of Governors of Harvard University's Center for Mental Illness and the Media. He has keynoted for the American Psychological Association on two occasions.

He is a 2006 inductee into the Professional Speaking Hall of Fame' and the concurrent recipient of the National Speakers Association Council of Peers Award of Excellence, representing the top 1% of professional speakers in the world

His prolific publishing includes over 500 articles and 25 books, including his best-seller, Million Dollar Consulting (from McGraw-Hill). His newest is The Million Dollar Consulting' Toolkit. His books have been on the curricula at Villanova, Temple University, and the Wharton School of Business, and have been translated into German, Italian, Arabic, Spanish, Russian, and Chinese.

He is interviewed and quoted frequently in the media, and is an active member of the American Federation of Television and Radio Artists. His career has taken him to 54 countries and 49 states. (He is afraid to go to North Dakota.) Success Magazine has cited him in an editorial devoted to his work as 'a worldwide expert in executive education.' The New York Post calls him 'one of the most highly regarded independent consultants in America.' He is the winner of the prestigious Axiem Award for Excellence in Audio Presentation.

In 2006 he was presented with the Lifetime Achievement Award of the American Press Institute, the first-ever for a non-journalist, and one of only seven awarded in the 60-year history of the association.

He has coached the former and present Miss Rhode Island/Miss America candidates in interviewing skills.

He once appeared on the popular American TV game show Jeopardy, where he lost badly in the first round to a dancing waiter from Iowa.

4.8 out of 5 stars
4.8 out of 5
11 global ratings
How are ratings calculated?
To calculate the overall star rating and percentage breakdown by star, we don’t use a simple average. Instead, our system considers things like how recent a review is and if the reviewer bought the item on Amazon. It also analyzes reviews to verify trustworthiness.
Top reviews

C. Berg
5.0 out of 5 stars A gold mine of helpful, practical, prescriptive information
Reviewed in the United States on September 27, 2021
Verified Purchase
I wasn’t sure what to expect, but I was immediately hooked. The advice in this book is specific, prescriptive, and well communicated. A fundamental point is to spend time with the client to establish specific outcomes, and there are many examples of how to think this way and articulate it. So far it is well worth the price and I can immediately use the information.
Read more
2 people found this helpful
Report abuse