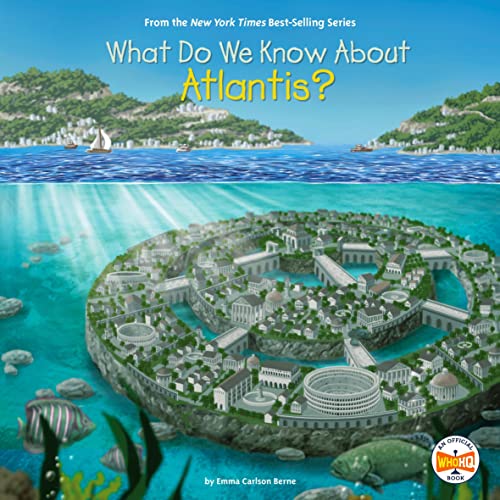 The What Do We Know About? series explores the mysterious, the unknown, and the unexplained. Does the underwater kingdom of Atlantis really exist, or is it just a centuries-old myth? Find out all there is to know about Atlantis in this compelling and up-to-date addition to an exciting new series!

From the #1 New York Times Best-Selling Who Was? series comes What Do We Know About?, a series that tells the stories of world-famous crytpids, mysteries, and more.

What Do We Know About Atlantis? lets curious young listeners dive into what we really know about the sunken city. First described by Plato, the idea of Atlantis has existed since 360 B.C.! Learn about the history of the Greek god Poseidon's relationship with the kingdom and the real research that's been done by historians and scientists who are trying to locate Atlantis. Featured in plenty of movies, books, and comics, Atlantis is still relevant in popular culture today...but does it really exist? Find out all the facts we do know about it in this exciting book.

5.0 out of 5 stars
5 out of 5
7 global ratings
How are ratings calculated?
To calculate the overall star rating and percentage breakdown by star, we don’t use a simple average. Instead, our system considers things like how recent a review is and if the reviewer bought the item on Amazon. It also analyzes reviews to verify trustworthiness.

kk
5.0 out of 5 stars Atlantis!
Reviewed in the United States 🇺🇸 on December 13, 2022
Verified Purchase
Not a big book but I read anything Atlantis. A nice read.
Read more
Report abuse

Jennifer Parkin
5.0 out of 5 stars Adore this series
Reviewed in the United States 🇺🇸 on January 16, 2023
Verified Purchase
This whole series of books 📚 are absolutely amazing!!
Read more
Report abuse
See all reviews